After months of bickering and infighting, members of the OPEC cartel have finally reached an agreement to reduce oil production. On Wednesday, the cartel announced plans to reduce its output by about 1.2 million barrels per day (bpd) from recent levels, to 32.5 million bpd. OPEC also said that it expected producers outside the cartel to cut production by 600,000 bpd.

News of the deal sent Brent crude prices up by about 8%. Many U.S. energy stocks jumped even more. For example, shares of EOG Resources (NYSE:EOG) soared 11% on Wednesday, while shares of Continental Resources (NYSE:CLR) skyrocketed a stunning 23%. 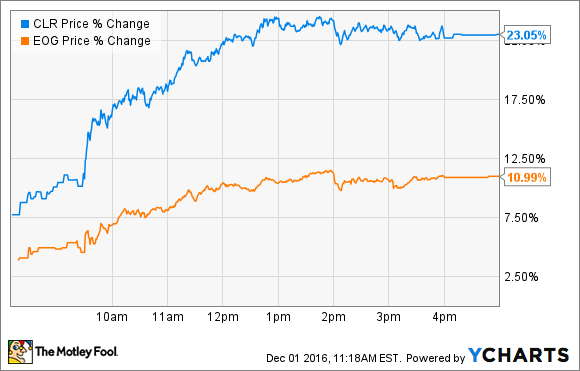 Indeed, OPEC hopes to increase oil prices to about $55 to $60 per barrel through its output cuts. Yet the impact of this OPEC agreement depends on the answers to three vital questions.

Will Russia join the production cuts?

OPEC has stated that producers outside the cartel will help rebalance the oil market by cutting production by 600,000 bpd. Russia, which is currently the world's top oil producer, is critical to achieving these targeted cuts.

Russia has agreed to reduce its production by up to 300,000 bpd -- but this is "conditional on its technical abilities". Indeed, it is difficult for many Russian oil producers to reduce production without compromising their ability to ramp up output again. Furthermore, since most Russian oil companies are publicly traded, it could be hard to convince any of them to shoulder the burden of cutting production.

Even a 300,000 bpd cut would leave Russia producing more oil than it was pumping in the first half of 2016. Still, that would be better than continued growth. We won't find out how serious Russia is about working with OPEC until 2017.

An even bigger question is whether OPEC members themselves will abide by the agreement. This week's OPEC deal sets output quotas for most OPEC members. (Libya and Nigeria were exempted.) However, each country has a significant incentive to cheat and pocket a few extra dollars by producing beyond the official quota.

In the past, OPEC has suffered significant compliance problems due to this incentive to cheat. Often, Saudi Arabia -- by far the top oil producer within OPEC -- has been forced to shoulder the burden of production cuts singlehandedly. It doesn't seem willing to play this role any longer. If other cartel members ignore their quotas, Saudi Arabia will probably ramp up production again.

If the past is any precedent, OPEC may deliver most of its planned production cuts in the next few months. But the higher oil prices go, the greater the incentive for each country to cheat. To maintain higher prices, OPEC will need to stay disciplined over a period of years.

How will U.S. oil producers respond?

Finally, the actions of U.S. oil companies -- especially lower-cost producers like EOG and Continental Resources -- will play a big role in determining how high oil prices rise. On the one hand, these companies don't want to be too aggressive in case oil prices crash again. On the other hand, they have significantly reduced their costs in the past two years, allowing them to thrive with much lower oil prices.

For example, EOG Resources claims that some of its fields are more profitable today with oil at $50/barrel than they would have been in 2012 with oil at $95/barrel. Indeed, with oil above $50, it is profitable to drill in most parts of Texas' prolific Permian Basin and Eagle Ford shale.

EOG recently set ambitious targets for production growth over the next several years. With a flat $50/barrel WTI oil price, it expects to increase output at a 15% compound annual growth rate (CAGR) between now and 2020. If oil prices were sustained at $60 over that period, output would rise at an even more impressive 25% CAGR.

Additionally, higher oil prices will encourage oil companies to tap their inventories of drilled but uncompleted wells, providing a relatively quick boost to production. Continental Resources recently started completing wells in North Dakota. It expects to enter 2017 with 175 remaining uncompleted wells. If prices continue to rise, Continental Resources will step up its well completions next year.

Higher-cost producers may not be as quick to increase production in 2017 and beyond. But the more oil prices rise, the more U.S. shale producers will ramp up drilling activity. The responsiveness of U.S. oil companies to higher oil prices (in the form of higher production) will help determine whether oil prices as high as $60 can be sustained over the next few years.