Please ensure Javascript is enabled for purposes of website accessibility
Log In Help Join The Motley Fool
Free Article Join Over 1 Million Premium Members And Get More In-Depth Stock Guidance and Research
By Matthew DiLallo – Feb 3, 2016 at 9:19AM

The company has set itself up for a big rebound, if oil prices cooperate.

EOG Resources (EOG -7.80%) has taken a vastly different approach to managing its business through the current downturn in the oil market. While peers like Devon Energy (DVN -8.60%) were spending virtually all of their available cash flow to push production higher, EOG Resources has chosen instead to "refrain from growing oil production into an over-supplied market."

That restraint put the company in a position to thrive should oil prices rebound sharply in 2016, which in terms of production growth has the potential to be its best year yet.

Focused on returns, not growth
EOG Resources spent the bulk of 2015 working to get its costs down. It did this by becoming more efficient as well as by focusing on new innovations that are targeting the best spots of an oil and gas reservoir. This is yielding lower well costs as well as higher well output, which are two of the key drivers of drilling returns.

In fact, the company has been able to vastly improve its well economics so that its after-tax rate of returns are stronger at a much lower oil price. As the slide below shows, drilling returns in the Delaware Basin Leonard are better today at $50 oil than they were a few years ago when oil was at $95 per barrel. 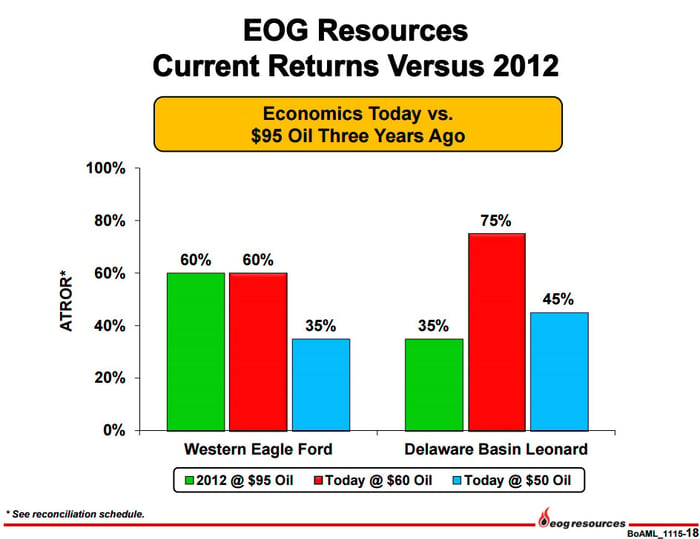 Unfortunately, at the moment we're a long way away from $50 oil, let alone the more than $60 oil price that EOG Resources is waiting on before it opens up the floodgates of production growth.

A huge gusher awaits
Having said that, EOG Resources' approach to just keep its production flat sets it up well to deliver strong production when prices improve. That's because the company has continued to invest to drill wells, but didn't spend the money needed to complete them, which is the actual fracking. That resulted in a growing inventory of drilled uncompleted wells, which was expected to be at 320 at the end of 2015. To put that number into perspective, EOG Resources drilled and completed 450 wells in 2015 so it has nearly a year's worth of inventory just waiting to be completed.

That inventory puts it well ahead of Devon Energy, which, for example, spent 2015 steadily completing wells that grew its oil production, pushing it higher by more than 30%. Because of this, Devon Energy won't be able to grow its production as fast as EOG Resources has, with the company needing to drill new wells to drive growth. EOG Resources, on the other hand, can grow twice as fast because it can complete its backlog and drill additional wells.

The hold-up is getting oil prices to cooperate, which is a problem because the company is waiting until it sees a sustainable oil price above $65 a barrel before it unleashes a gusher of growth. At the moment, that means crude oil would need to more than double. While that's a possibility before the end of the year, it's not likely going to happen anytime soon. That would delay the company's ability to drive robust growth in 2016 because it will take time before its inventory of wells can be completed and new ones drilled. In other words, while EOG Resources can ramp its production much sooner and at a faster pace than its peers, it's not as if it can just flip the switch on growth.

Investor takeaway
EOG Resources' ability to deliver its best year yet boils down to what happens with the price of oil. If it rallies sharply before mid-summer, then the company could set a production record before the year is out. However, if oil stays lower for longer, we could start to see EOG Resources slowly begin to complete some of its uncompleted well inventory just to manage its decline rate, which would mute its upside potential when oil does finally rally.

Matt DiLallo has no position in any stocks mentioned. The Motley Fool owns shares of Devon Energy and EOG Resources. Try any of our Foolish newsletter services free for 30 days. We Fools may not all hold the same opinions, but we all believe that considering a diverse range of insights makes us better investors. The Motley Fool has a disclosure policy.