Please ensure Javascript is enabled for purposes of website accessibility
Log In Help Join The Motley Fool
Free Article Join Over 1 Million Premium Members And Get More In-Depth Stock Guidance and Research
By Rich Duprey – Dec 3, 2016 at 10:24AM

It's selling a lot more bikes, but the powersports vehicle maker is cutting off an important profit source.

Since reintroducing the Indian Motorcycle brand to the market in 2013, Polaris Industries (PII -0.35%) has been stealing large swaths of sales and market share from industry leader Harley-Davidson (HOG 0.93%). Its rival may still own the majority of the heavy bike industry, but Polaris has been able to challenge its supremacy all across the board, both on the road and on the track.

Part of Polaris' success has been a result of introducing a bike in each market and at every price point. From touring and cruisers to sportier models, too, there's an Indian Motorcycle that can rival a Harley.

The fringe on the handlebars

Though sales of the actual motorcycles bring in the biggest bucks for the bike makers, there's another component that's often overlooked but, many times, is just as lucrative, if not more so: the sale of parts, garments, and accessories.

When you buy a motorcycle, you might also buy a helmet, a new leather jacket, chrome handlebars, or new exhaust pipes. Beyond the safety components necessary to ride a bike, many buyers want to look the part, too. In fact, you'll find many consumers will buy gear before they even own a bike, just for that reason.

Across all of Polaris Industries' segments, parts, garments, and accessories, or PG&A, totaled $224.4 million in the third quarter, or 19% of the $1.19 billion in total sales it recorded for the period. That makes these ancillary items a bigger contributor to the powersports vehicle maker's performance than the motorcycles themselves, a division whose sales came in at $183.2 million -- inclusive of its respective PG&A sales.

A growing part of the business

Such sales are also just as lucrative for Harley-Davidson. For its third quarter, PG&A totaled $296.6 million, or almost 38% of the total $789 million it reported in motorcycle sales.

However, because Polaris also sells ATVs, snowmobiles, and utility vehicles, these parts and accessories sales are not equal for each division. Polaris generates the most money from its off-road vehicles and snowmobiles -- $923 million last quarter. As a result, it sells more stuff into the PG&A category for that division than it does for motorcycles or UTVs.

Still, as the motorcycle segment becomes a larger component of its overall business, PG&A sales will grow, and therein lies a problem.

The motorcycle industry is changing. According to the Motorcycle Industry Council, the median age of the typical motorcycle owner in 1990 was 32, and the typical owner was a married male who had a high school diploma. Today, the typical owner is still likely to be married, but he's got at least some college education under his belt, maybe a college degree -- possibly even post-graduate. But the median age has climbed significantly, to 47 years old. Just 17% of riders today are under 30, compared to 41% 25 years ago.

That's a big swing for the industry, and it highlights how it needs to begin attracting younger riders again for the overall health and future of motorcycling. Both Harley and Polaris say they are reaching out to this demographic.

A couple of years ago, Harley-Davidson introduced its Street 500 and 750 models, which were geared to new and urban riders as well as to females, blacks, and Hispanics. Polaris answered that first with its Indian Scout, and then with the Scout Sixty. Both have enjoyed considerable success -- perhaps too much.

According to CEO Scott Wine, Polaris is "selling disproportionately more" of its Scouts, Scout Sixtys, and even Victory Octanes, another model targeted to that demographic -- but those bikes actually don't sell as much in PG&A goods as the bigger bikes do, so its segment sales fell for the quarter even though motorcycle retail sales were up. 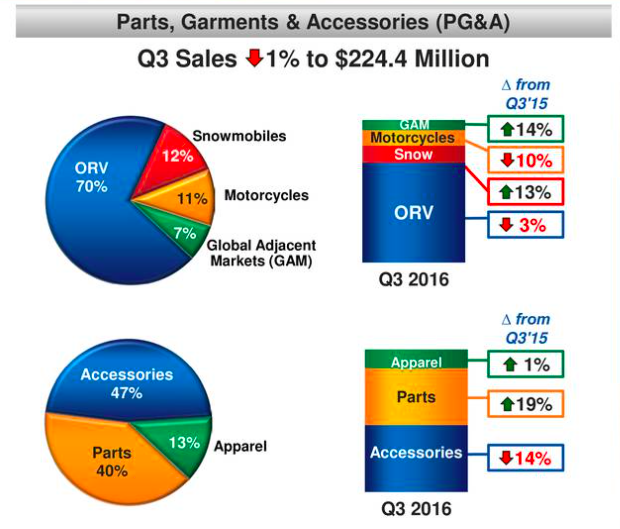 Even though Polaris has suffered a collapse in ATV sales as safety recalls impacted RZR sales -- off-road vehicle sales plunged 23% for the period -- PG&A sales were off only 3%. In contrast, while motorcycle retail was 3% higher in the third quarter, PG&A sales tumbled 10% because of the product mix. As this is the market Polaris (and Harley) is increasingly targeting, it could carry with it the unwanted side effect of losing on higher-margin parts and accessories sales.

The motorcycle industry is in the midst of a slowdown that's affecting everyone, but as Polaris Industries gains traction in the heavyweight bike class, it's selling more smaller models, so it will lop off an otherwise profitable piece of business. It's a small one still, but investors should recognize the collateral damage the company will suffer for getting a bigger slice of the overall market.