The technology sector is known as the place to go for stocks with explosive growth potential, but expectations for significant and sustained performance increases can also come with big downsides. Many of tech's biggest names and promising upstarts are priced for high-flying earnings growth, and when that doesn't pan out, investors can be left holding the bag rather than holding a multibagger. However, not all tech stocks have lofty valuations that carry substantial risk.

To help investors generate leads for stocks with more upside than their current prices indicate, we asked three Motley Fool contributors to single out one of the most undervalued companies in tech. Read on to learn why they selected EPAM Systems (NYSE:EPAM), MercadoLibre (NASDAQ:MELI), and IBM (NYSE:IBM).

Brian Feroldi (EPAM Systems): This year's surprise Brexit vote has cast a long shadow over many companies that do business in Europe. Included in that list is Pennsylvania-based EPAM Systems, a leading provider of product development and software engineering services. While this company is headquartered in the U.S. and has offices around the globe, the majority of its workforce is based out of Eastern Europe countries such as Belarus, Ukraine, and Russia. Combine that fact with the recent departure of its CFO and a few small downward revisions to earnings and it is no surprise to see that shares have trailed the market year-to-date. 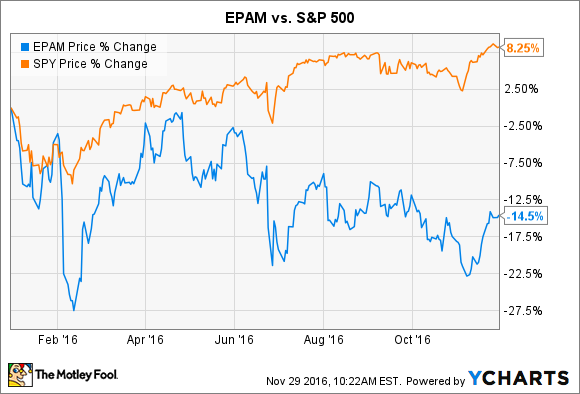 The company's waning share price has pulled its trailing price-to-earnings ratio all the way down to 35, which on the surface still looks like an "overalued" stock. However, I'd argue that investors who buy today are actually getting a bargain.

My reasoning is that the company is still projecting strong double-digit growth. For 2016, management is forecasting revenue growth of more than 26%. Over the next five years, analysts see profits growing in excess of 17% annually. Those are terrific growth rates, and since more than 90% of the company's revenue is recurring, I have high confidence that management can meet or exceed those figures.

When companies are growing fast, it can be far more useful to look at forward estimates to get a better sense of value. Right now, EPAM stock is trading for less than 20 times next year's earnings estimates, which represents a tiny premium over the S&P 500 in general. I think that makes no sense since EPAM is growing much faster, is founder-led, and has a recurring revenue business model. Add it all up and I believe that EPAM Systems' stock is undervalued today, which is why I think it is a great stock to consider buying.

Brian Stoffel (MercadoLibre): It might sound odd to call a stock that's advanced 43% year-to-date  "undervalued," but in the case of MercadoLibre, I think that's exactly the case.

The key thing to understand about this Latin American e-commerce company is that it does business in local currency -- with Brazil, Mexico, Argentina, and Venezuela being the four largest markets. However, it reports revenue and earnings in U.S. dollars. With the strength of the dollar -- and the volatility of many Latin American currencies lately -- reported results look much worse than they really are.

Take Brazil as a case in point. During 2015, MercadoLibre reported that Marketplace revenue shrank 9.1% -- not a promising sign. But in local currencies, business actually grew 23%. Of course, some of this was due to inflation, but the underlying trend is undeniable: MercadoLibre's growth is far from over.

Trading at 58 times trailing earnings, it might be tough to call this stock "cheap." But again, those figures are based on U.S. dollars, and it hides the underlying strength of MercadoLibre's platform. The company is becoming a mix of PayPal (NASDAQ: PYPL), eBay (NASDAQ: EBAY), and Amazon (NASDAQ: AMZN). And the network effect that this ecosystem creates will be a force as the Latin American middle class continues to grow.

If you have a long enough time frame to allow currency fluctuations to smooth out, I believe you'll look back on today's prices and realize just how undervalued MercadoLibre really is.

Keith Noonan (IBM): Between its low price-to-earnings ratio, hefty dividend, and potential to shape and benefit from some of tech's most influential trends, there's a strong case to be made that International Business Machines is one of the most undervalued technology stocks around.

IBM trades at roughly 12 times forward earnings estimates, which is well below the S&P 500 average forward earnings multiple of 18. The company's sales and earnings have been depressed due to continued erosion of its legacy software and hardware businesses, but it's making substantial progress in its efforts to transition to a cloud-focused model.

Its last quarterly report saw revenue from its combined strategic imperatives segment (which includes cloud computing, analytics, artificial intelligence, and security) grow 16% year-over-year to reach $8 billion and 40% of sales. This was offset by a 21% sales decline in the company's systems segment, and overall revenues were down 0.3% even with sales added from acquisitions. So, IBM's cheap valuation reflects some justifiable uncertainty about its turnaround, but evidence is building that the company can reinvent itself and the surrounding concerns present a big opportunity for long-term investors.

IBM also offers an attractive dividend. At current prices, its yield sits at 3.4%, and the company has boosted its annual payout for 16 years running. The company is a cash machine with $14.47 billion free cash flow generated over the trailing-12-month period, and the annual adjusted cost of distributing its current quarterly dividend represents just 36.8% of that figure. That leaves room for payout growth even if margins and sales continue to be challenged and capital expenditures rise as a result of the transformation process.

With a beaten-down valuation, the stock has substantial room to run if its turnaround gains ground, and its dividend component provides a buffer for riding the transition.