Please ensure Javascript is enabled for purposes of website accessibility
Log In Help Join The Motley Fool
Free Article Join Over 1 Million Premium Members And Get More In-Depth Stock Guidance and Research
By Keith Speights – Updated May 24, 2017 at 3:29PM 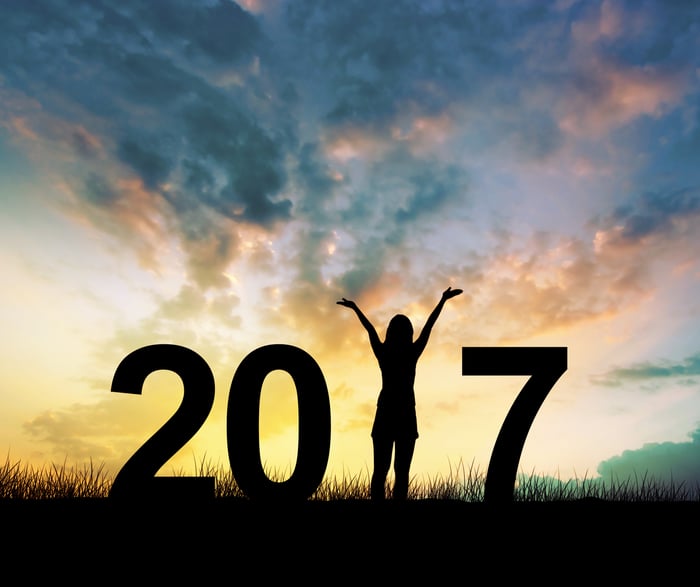 There has been one success after another for GW Pharmaceuticals' cannabidiol drug Epidiolex. In March, the biotech announced positive results from a late-stage study of the drug in treating seizures associated with Dravet syndrome, a rare form of epilepsy that occurs in infants. Three months later came news of more positive results from a study of Epidiolex in treating seizures associated with Lennox-Gastaut syndrome (LGS), a rare form of epilepsy that begins in childhood.

They say that bad news comes in threes, but good news might also. In September, GW Pharmaceuticals announced positive results from a third late-stage study of Epidiolex. This study also evaluated the drug in treating LGS seizures. GW Pharmaceuticals expects to file for regulatory approval in the U.S. in the first half of 2017, based on these clinical studies.

If Epidiolex wins approval, some analysts think the drug could achieve peak annual sales of around $3 billion. GW Pharmaceuticals' market cap currently stands at roughly that same amount. Should the company's epilepsy drug prove to be as successful as the optimistic projections, there's no question that GW's stock will soar.

Be aware, however, that other analysts are more pessimistic. Lower peak sales estimates for Epidiolex range from $300 million to $800 million. GW Pharmaceuticals' shares would have plenty of upward potential at the upper end of that range, but not at the low end. Of course, it will be quite a while before we know which estimate is most accurate. In the meantime, I expect bullish sentiment will prevail for GW Pharmaceuticals.

Corbus Pharmaceuticals emerged as one of the biggest marijuana stock winners of 2016. The share price of the clinical-stage biotech quadrupled this year with high expectations for its oral endocannabinoid-mimetic drug Resunab.

While many investors were excited about Resunab's prospects, there was also a great deal of skepticism about whether or not the drug would prove successful in a mid-stage clinical study for treating systemic sclerosis, a chronic autoimmune rheumatic disease. Corbus answered the skeptics in November when the company announced positive results from that study.

In the mid-stage study, Resunab achieved a Combined Response Index in diffuse cutaneous Systemic Sclerosis (CRISS) score of 33% at week 16, versus 0% for placebo. To put that into perspective, a CRISS score of 20% is considered a medically meaningful improvement. Corbus CEO Yuval Cohen gushed that the positive results exceeded the company's expectations.

It's possible that pessimism about Resunab's prospects could prove warranted when these results are announced. However, if Corbus pulls off a surprise or two like it did with the systemic sclerosis study results, this marijuana stock should skyrocket yet again.

A picture is supposed to be worth a thousand words, so I'll let the following chart tell the story for Insys Therapeutics in 2016: 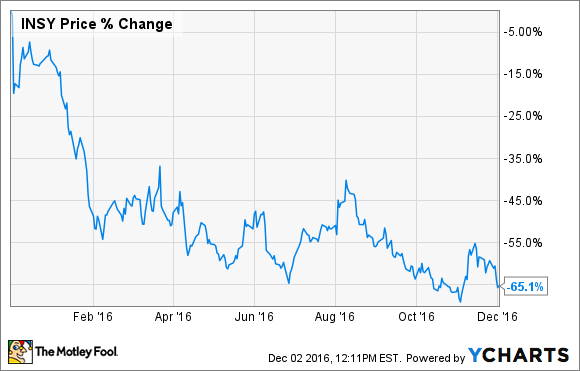 This dismal performance made Insys one of the worst marijuana stocks of the year. Insys' woes relate primarily to rapidly declining sales for its lead drug, Subsys. However, better days could be on the way.

In July, Insys received good news for its first cannabinoid candidate, Syndros. The U.S. Food and Drug Administration (FDA) approved the drug as a treatment for anorexia associated with weight loss in patients with AIDS, and nausea and vomiting associated with cancer chemotherapy in patients who have failed to respond adequately to conventional treatments. That good news hasn't translated to financial success for Insys yet, however, because Syndros is still waiting to be scheduled by the U.S. Drug Enforcement Administration.

Insys should launch Syndros in the U.S. next year. Piper Jaffray analyst David Amsellem estimates the drug could reach peak annual sales of $300 million to $400 million. Considering that Insys' market cap now is only around $800 million, a successful kick-off for Syndros in 2017 could be just what the company needs to transition from one of the worst marijuana stocks to one of the best.