The Hepatitis C / HIV behemoth has seen its price tank in 2016 as investor fears about growth slowing -- and even reversing -- have come true. Slashing prices to maintain its Hepatitis C market share has dramatically impacted Gilead's top line, with overall revenue falling 9.6% year over year in the third quarter on a 30.7% decline in Hepatitis C revenue.

Unfortunately, Gilead's pipeline of developing drugs doesn't look likely to provide any immediate relief. The biotech has been rocked by several recent setbacks, including unimpressive data for its myelofibrosis drug momelotinib and the end of its development program for NASH hopeful simtuzumab. Naturally, Wall Street analysts are turning to M&A, hoping Gilead will buy someone to juice growth.

And management has made it very clear that they know a deal needs to happen, too.

If everyone agrees, why hasn't it happened?

Gilead's management has repeatedly said that buyout price expectations have been way out of line with what Gilead is willing to pay.

This has felt more and more like an excuse to me, though, because biotech has fallen quite a bit in 2016. Even with the Trump bump, biotech (as measured by the IBB index) is down about 17% year to date. Surely Gilead can find some deals when everything's on sale for 17% off list price (or it could have when the IBB was down over 20% year to date, as it was in early November). 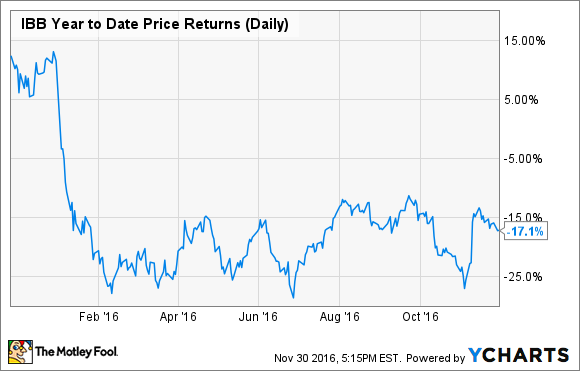 That was, until I read the transcript of Gilead's Q&A at a recent healthcare conference (all quotes courtesy of S&P Market Intelligence).

Biotech analyst Alethia Young asked, "The market's pulled back a great deal, and I mean, I assume your appetite [for M&A]'s the same or more [...] So how do you think about the fact that most of these stocks that pulled back, pretty meaningfully, that would be your potential acquisition targets?"

John Milligan's response made Gilead's current struggle very clear: "Yes, it's a common question. Does management's mindset change relative to their market cap, and the answer is almost always no. The high is the new floor" (emphasis mine).

If boards still have unreasonable expectations, it doesn't matter if the IBB is down 5% or 20% -- they'll still demand astronomical prices for a buyout.

This leaves Gilead with three choices:

1. Buy the companies anyway, at prices that are so expensive that Gilead can't juice enough profitability out of the drugs to be worth it. At the end of the day, companies are in the business of making money -- so this isn't a good idea, no matter how much Wall Street might want it.

2. Wait for expectations to come in line with valuations. Milligan noted later that, "After a time, that sentiment can go away and then things can reset, but it usually takes quite a bit of time." Playing the waiting game isn't fun for a biotech in need of new drugs, but the alternative (option No. 1) is certainly worse. This is likely Gilead's primary strategy -- I suspect it has several acquisition targets in mind and is simply waiting for executive teams to come down a bit on price.

3. Hunt for other companies. Milligan made clear that Gilead isn't wedded to drugs in its core areas of competence, signaling Gilead's willingness to buy a drug well outside of its wheelhouse if "you can get it to market quickly and you could market it with a fairly efficient sales force," particularly if those deals "don't distract from doing other things." Gilead has some history of these kinds of transactions, as its cardiovascular drugs Letairis and Ranexa -- which combine for over $1 billion in sales annually -- are outside its core drug franchises (and both were purchased). I wouldn't be surprised if it did more in the near future as a bridge while it waits for option two to pan out. At a conference in June, Chief Scientific Officer Norbert Bischofberger noted that he is "spending about 30% of my time, by the way, looking at external opportunities." That tells me Gilead is likely looking beyond the handful of companies in its core areas and has cast its net significantly wider.

Now, we wait. Gilead has signaled that it has some near-term plans. Management frontloaded share buybacks to the first half of 2016 with the expectation that Gilead might need more cash (presumably for an acquisition) in the back half. Management has also taken on new debt despite being quite cash-flow positive, again implying it sees some opportunities to deploy that cash soon. At seven times trailing-12-month earnings (and with a 2.5% dividend), Gilead remains a bargain, and I'm content to wait and let management's patient discipline pay off.