After the election of Donald Trump and the announcement that OPEC was planning to cut production, shares of oil and gas companies have been on a tear. One subset of the industry that has seen large gains are service companies that are tied closely to North American shale drilling. Here's a quick look at a few of the oil services companies that saw double digit gains last month.

The prevailing theory is that OPEC's production cut and a Trump presidency will be great for shale drilling in the U.S. A cut from OPEC should mean higher prices that will incentivize producers to spend more on drilling, and Trump had said on the campaign trail that he will look to loosen regulations on oil and gas drilling and even open up more federal land for production. This would likely mean that oil services companies that have deep ties to the shale industry will see a decent uptick in revenue.

While Pioneer and Superior are both service contractors that have international business segments, the bulk of their revenue comes from drilling services in the United States and specifically for land services. As of their most recent earnings results, Superior and Pioneer generated 75% and 97% of their revenue, respectively, in North America, Archrock is more of a transportation and logistics service company as it rents and sells gas compression equipment used for pressurizing pipelines. This company may not benefit as much from more drilling activity directly, but the increased volumes from more drilling activity will likely require its services.

Newpark Resources is probably the least impacted by this news. The company's two business segments are specialty drilling fluids and mobile protective mats to prevent spills and other environmental damage at drill sites. Most of its specialty fluids business services the offshore industry and a decent chunk of that is international. The economics of shale are just better than offshore production right now, so chances are its drilling fluids segment will see muted gains. However, its protective mat business -- about 15% of revenue -- could see a big jump if producers start to head back to the oil patch in earnest.

Before investors get too excited about the possibility of these kind of gains, it's important to remember that this is still speculation as to exactly how they will impact the market overall. The good news is that the oil and gas industry in general is on the road to recovery, and the addition of OPEC cuts and more land to drill could only accelerate these trends. If they don't pan out, though, it's possible that many of these short term gains get pulled back as some might be expecting a rapid recovery.

At the same time, none of these companies have been stand out players in their respective industries, and it is part of the reason why shares have suffered so much over the past two and a half years. 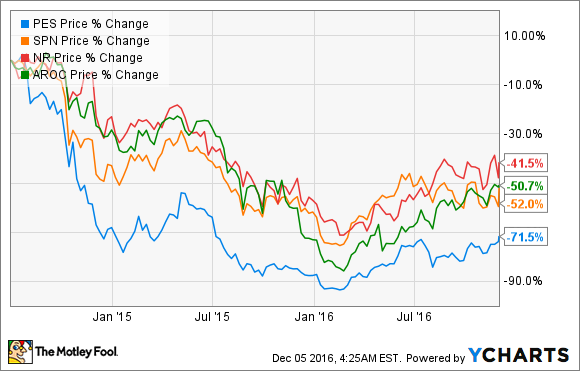 Until we start to see some tangible results of this recovery in these companies' earnings results, it's probably best to just sit this one out and see how these companies perform over the next few quarter before making an investment decision.