Shares of Dave & Buster's (NASDAQ:PLAY) were jumping last month as the restaurant and games chain caught a tailwind from Donald Trump's election, rising 13%, according to data from S&P Global Market Intelligence. Like several other restaurants, Dave & Buster's benefited from the market perception that labor laws would be relaxed under a Trump administration. As you can see from the chart below, the stock surged in the days following the election. 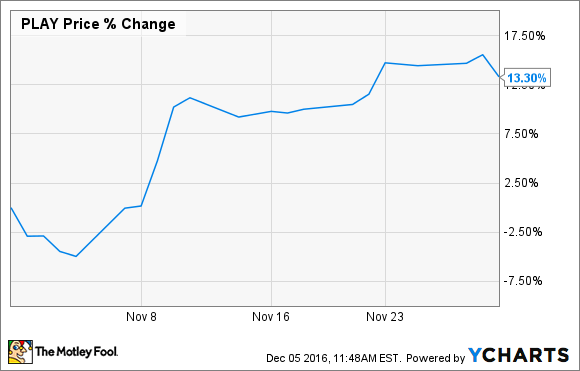 In the two sessions following Trump's election victory, Dave & Buster's stock gained 10%. A number of restaurants surged after the election as investors expect that a Trump administration will keep the federal minimum wage at $7.25 per hour, resist Obama's overtime rule (which was recently struck down by a Texas court), and relieve some requirements for employers to provide healthcare by repealing the Affordable Care Act.

Labor costs take up about 23% of Dave & Buster's revenue as the company does not franchise, so it would stand to benefit from looser labor regulations.

Dave & Buster's has been a big winner since its IPO two years ago as shares have nearly tripled. The company's unique formula of food and amusement has proved popular, driving consistent comparable sales growth and operating leverage as operating income is up nearly 40% this year.

The company is set to report third-quarter earnings tomorrow. Analysts are expecting earnings of $0.14 per share and $216.7 million. With an aggressive store-opening plan, continuing comparable sales growth, and a modest valuation, I'd expect Dave & Buster's stock to continue to move higher.