Cisco Systems (CSCO 1.55%) is a "mature" tech stock which many investors likely own for income instead of price appreciation. The networking giant's revenue rose just 3% last year and is expected to decline about 2% this year due to sluggish enterprise spending and the commoditization of its core businesses of routers and switches.

Therefore, investors might be wondering if Cisco can ever grow its business to generate fresh sales growth again. The answer lies in three key markets -- software defined networking, cybersecurity, and the Internet of Things.

Software defined networking (SDN) platforms consist of cloud-based networking solutions which depend more on software than hardware. As cloud-based services do the heavy lifting, the need for on-site routers and switches declines and hurts Cisco's core business. Last year, Guggenheim analyst Ryan Hutchinson warned that Cisco's outlook was clouded by "uncertainty around future network architectures as more workloads migrate to the cloud."

Cisco's major rival in this space is Arista Networks (ANET 0.66%), which sells data center switches and routers optimized for SDN platforms. Arista believes that the combination of its Jericho switches and FlexRoute software can replace on-site routers as cheaper SDN solutions. Cisco repeatedly sued Arista over patent violation claims, but those lawsuits aren't slowing Arista down -- the company is still expected to post 34% sales growth this year.

The real way to counter Arista is with better support for SDN platforms. Cisco's hardware is already compatible with OpenFlow, the same open-source protocol used by Arista and OpFlex, a newer protocol it introduced in 2014. It's unclear if those efforts will work, but Cisco clearly needs to pivot its aging networking hardware devices toward SDN-optimized ones to stay ahead of the tech curve.

Cisco's fastest growing business is its cybersecurity division, which protects its networking hardware and software from external attacks. The unit was built upon its acquisitions of companies like ThreatGRID, Sourcefire, OpenDNS, and Lancope, and competes directly against perimeter security players like firewall vendor Palo Alto Networks (PANW 2.01%) and threat prevention firm FireEye (MNDT 0.00%).

By bundling its cybersecurity solutions with its networking hardware and software, Cisco gains the advantages of pricing power and scale against these stand-alone competitors. As a result, Cisco's cybersecurity business has become its fastest growing division -- sales rose 13% to $1.97 billion last year and accounted for 4% of its top line. Last quarter, the unit posted 11% sales growth. 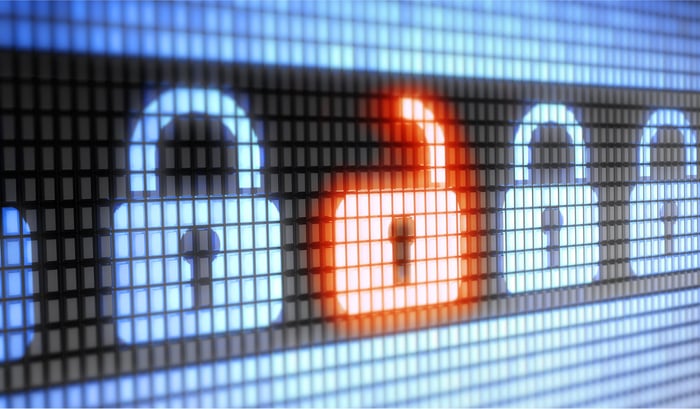 Looking ahead, Cisco will likely acquire additional security companies to beef up that portfolio. It acquired cloud security firm CloudLock and containerization company ContainerX last quarter, and rumors suggest that it could be interested in acquiring FireEye or web application security company Imperva.

Cisco estimates that the number of connected devices worldwide will double from 25 billion in 2015 to 50 billion in 2020. That so-called Internet of Things (IoT) market includes mobile devices, wearables, home automation appliances, connected cars, drones, and other gadgets.

As one of the world's top networking equipment companies, Cisco views the IoT as a natural extension of its networks. That's why the company acquired IoT service platform Jasper Technologies (now known as its IoT Cloud Business Unit) for $1.4 billion earlier this year. Cisco is bundling those IoT services with its routers, switches, and UCS (Unified Computing Systems) servers, which helps it counter competitors in each market. Microsoft and IBM already use Jasper's platform to link their cloud customers to IoT devices.

Cisco is also investing heavily in the connected car market. Earlier this year, it partnered with Hyundai to develop in-vehicle network tech for high-speed data transfers. The companies believe that the platform can bridge the gap between today's connected cars and driverless cars in the near future. Cisco also provides end-to-end security for vehicles, delivers remote diagnostics and services, and lets drivers access third-party cloud services.

The SDN, cybersecurity, and IoT markets all represent great long-term growth opportunities for Cisco, but investors shouldn't expect the company to post double-digit sales growth anytime soon. Its core switches and routers businesses remain under pressure from cheaper rivals like Huawei, and it's struggling to counter nimbler rivals like Arista.

Those challenges won't fade away anytime soon, but I believe that Cisco's forward dividend yield of 3.6%, low payout ratio of 47%, and its P/E of 14 (which is lower than the industry average of 25) still make it a solid income play at current prices.