Shares of Keryx Biopharmaceuticals (NASDAQ:KERX), a biopharma focused on renal disease, rose more than 28% in November, according to data from S&P Global Market Intelligence. That move far outpaced the biotech sector in general as measured by the VanEck Vectors Biotech ETF (NASDAQ:BBH). 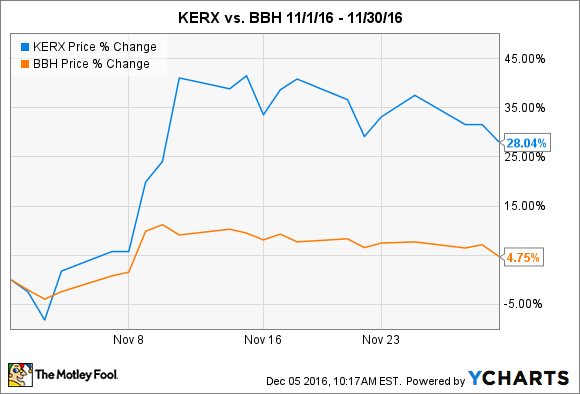 Keryx reported third-quarter results in November. Here's a look at some of the highlights from the report:

While the financial results were mixed, the big news from the quarter was that a second contract manufacturer has been FDA approved to produce Auryxia. This news should resolve the company's supply disruption issues.

Beyond the quarterly report, a few other news items released during the month caused the markets to cheer:

All in all, it was a month filled with good news, so it is not hard to understand why shares skyrocketed.

With Auryxia's supply issues now resolved, the company can once again focus its attention on building awareness and demand for the drug. However, that might prove to be a tough challenge given the company's recent missteps. After all, it is possible that providers who were impacted by the supply disruption might be left with a bad taste in their mouth and refuse to start new patients on the drug. Only time will tell how long it will take to win back their trust.

Investors won't know the answer to that question until the company announces its fourth-quarter earnings results. Potential investors might want to remain cautious until then.