Global spending on cancer medicines is rising along with average life spans, from $107 billion last year to an estimated $150 billion by 2020. Here, Motley Fool contributors offer opposing arguments about Celldex Therapeutics' ability to ride this trend and provide market-beating gains for long-term investors in the process.

Let's begin with a bearish viewpoint.

History isn't on your side

Brian Feroldi: While I think that Celldex has a fascinating pipeline and I'm rooting for it to succeed, the investor in me still believes that the smart move is to keep far away. After all, Celldex boasts a long history of disappointing shareholders, and I can't help but feel that we'll see more of the same from here.

Investors had to deal with a number of setbacks over the years, but the most recent one was quite a doozy. Earlier this year, the independent Data Safety and Monitoring Board conducted an interim analysis of Celldex's Phase 3 ACT IV study. This trial was testing Celldex's most advanced compound -- rintega -- as a hopeful treatment for patients with glioblastoma, an aggressive form of brain cancer. Unfortunately, the board recommended that the study should be terminated early since it was unlikely to meet the trial's primary endpoint. Shares were crushed when the news broke.

However, this wasn't the only time that investors were dealt a huge blow. Have a look for yourself at what long-term shareholders of this company have had to endure since it first hit the public markets more than two decades ago. 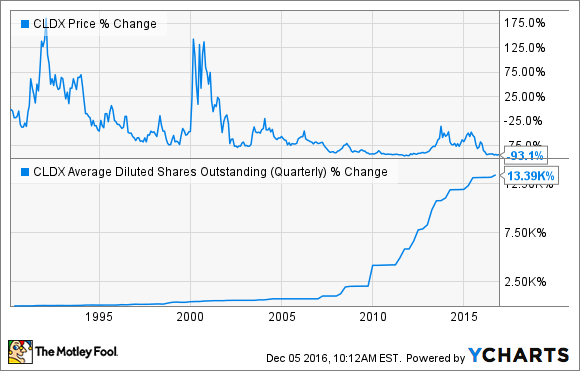 This data don't suggest that the rest of Celldex's pipeline will end in failure, but given this company's spotty history, I do think that caution is warranted.

Cory Renauer: Brian's absolutely right to be concerned about the company's spotty past. This is why I'd like to point out some numbers that favor the company's chance to finally reverse its fortunes. Perhaps the most important figure is a 133% progression-free survival benefit observed with its lead candidate glemba among a genetically defined group of breast cancer patients.

The company is currently enrolling a much larger group of similar patients into a study with progression free survival over standard chemo treatment as the main goal. If successful, it would most likely result in an approval for the first targeted treatment of this relatively large, well-defined patient population.

Other encouraging figures for Celldex involve its bulging clinical-stage pipeline. The company has five unique candidates in nine separate trials, and investigators from the National Cancer Institute are sponsoring two more studies with glemba in patients with rare forms of cancer.

Finally, I'd like to point to about $191 million in working capital and a lack of long-term debt on the company's balance sheet at the end of September. Despite a bustling development schedule, the company burned through just $96 million in the first nine months of the year.

If glemba succeeds, Celldex Therapeutics might be able to launch its first drug without heavily diluting shareholder value. If it suffers another shocking upset, though, highly differentiated candidates emerging from the pipeline could become a helpful safety net. With an extremely modest market cap around $385 million at recent prices, you'd be hard-pressed to find a better value play in the biotech industry.

Why You Should (and Shouldn't) Buy Celldex Therapeutics, Inc. @themotleyfool #stocks $CLDX Next Article
Current