NVIDIA (NASDAQ:NVDA) stock has rallied more than 160% over the past 12 months, thanks to strong demand for its gaming GPUs and robust growth in adjacent markets like data centers and connected cars.

However, that huge rally also reduced NVIDIA's dividend yield from around 1.5% to a mere 0.5% -- making it a weak income pick compared to fellow chipmakers Intel (NASDAQ:INTC) and Qualcomm's (NASDAQ:QCOM) yields of over 3%. Could NVIDIA give its dividend a big boost next year to attract more income investors? Let's discuss its payout ratio, dividend history, and bottom line headwinds to find out.

Over the past 12 months, NVIDIA spent just 19% of its free cash flow (FCF) of $1.3 billion on dividend payments. That percentage is much lower than Intel and Qualcomm's respective FCF payout ratios of 46% of 44%. Nvidia's FCF has also grown at a much faster rate than both chipmakers' FCF over the past three years. 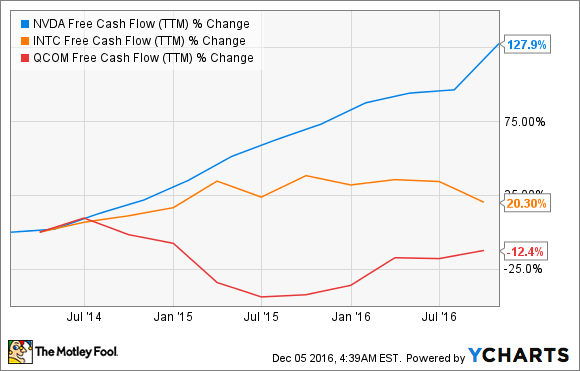 In terms of earnings per share, NVIDIA paid out 24% of its EPS over the past 12 months as dividends. That's also much lower than Intel's payout ratio of 48% and Qualcomm's payout ratio of 53%. All these figures clearly indicate that Nvidia could easily double its dividend if it wanted to.

NVIDIA introduced a regular dividend in late 2012, but its dividend hikes have been somewhat unpredictable in terms of timing.

However, the percentage of NVIDIA's dividend increases has gradually risen with every hike, indicating that it's intentionally becoming more generous with its dividend payments.

In addition to sustainable payout ratios and consistent dividend hikes, income stocks require consistent earnings growth. NVIDIA is slowing down in that department -- analysts expect its earnings to rise just 11% next year, compared to 122% growth this year.

The main weight on NVIDIA's bottom line is the expiration of its graphics cross-licensing agreement with Intel. When that deal expires in early 2017, NVIDIA will lose $66 million in revenues per quarter. Intel won't likely renew that deal, and rumors suggest that it plans to sign a new licensing deal with NVIDIA's rival AMD (NASDAQ:AMD) instead.

NVIDIA's decision to compete against AMD in the low-end GPU market and tougher competition in the connected car CPU market from Qualcomm could also hurt its gross margins in the coming year. If these factors reduce NVIDIA's earnings and FCF growth, the possibility of a major dividend hike could quickly fade.

NVIDIA could also decide that reinvesting its cash back into the company via R&D, marketing, and acquisitions would be wiser than raising its dividend. Since Intel, Qualcomm, and other chipmakers are aggressively expanding into adjacent markets like wearables, drones, cars, and Internet of Things gadgets, it makes sense to widen its moat instead of boosting its yield.

Tech stocks generally start raising their dividends considerably after they run out of room to grow. Since NVIDIA is still posting double-digit sales and earnings growth, raising its dividend will likely remain a low priority issue for the company.

So will NVIDIA raise its dividend in 2017?

Based on NVIDIA's previous dividend hikes and free cash flow growth, I expect the chipmaker to raise its dividend again near the end of 2017. But the percentage will likely be moderate (around 25%) and keep its yield well below 1% -- assuming that the stock's price doesn't plunge next year.

However, investors should note that NVIDIA currently trades at 45 times earnings, which is lower than the industry average of 75 for specialized semiconductor makers but much higher than the S&P 500's P/E of 24. Therefore, a market swoon could knock down high P/E stocks like Nvidia, and its yield would rise as the price declines -- giving investors a better chance to start a position in this high-flying stock.