Procter & Gamble's (NYSE:PG) latest fiscal year didn't give investors much to celebrate. The consumer goods titan booked a second straight year of weakening sales growth as it lost market share in most of its biggest product categories.

Things are looking slightly better to begin fiscal 2017, especially on the earnings front. However, P&G is still suffering from a few nagging problems that could make a stock price rebound harder to achieve.

The grooming portfolio was the company's worst-performing segment in the fiscal year that ended in August. Anchored by the Gillette, Mach3, Braun, and Fusion brands, that business is typically one of the company's most profitable because P&G commands an incredible 60% of worldwide market share in the blades and razors segment. Earnings continued to flow from the division recently, yet market share declined by more than a full percentage point.

P&G struggled to protect the shaving business from low-cost competition that flooded the aisles at major retailers. Rival brands, including in-store options, often matched up better on pricing and many consumers decided that the quality trade-off just wasn't big enough to warrant paying a premium for the P&G products. The company also lost business to online-focused competition like Unilever's (NYSE:UL) Dollar Shave Club.

P&G is aiming for a much better 2017 for the grooming division. Its own subscription service is seeing solid growth, and it has launched lower-priced disposable razor options that could fend off value-based competition. Increased advertising spending, along with an aggressive sampling program is already helping turn the tide, but P&G's success in this segment will depend on its ability to hold customers' interest with a steady stream of innovative shaving products.

Stumbles in the baby care division took the shine off what was an otherwise strong fiscal first-quarter report for P&G. Each of its five product categories enjoyed organic volume gains over the summer months, led by a 5% spike for its healthcare segment. 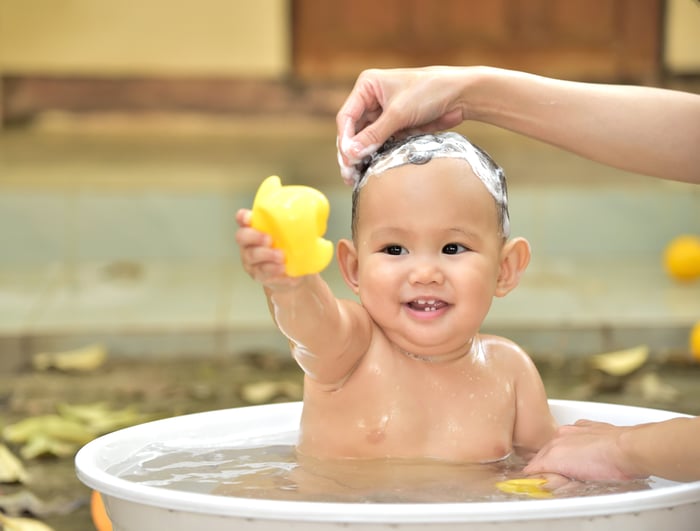 But its baby care business, which includes Pampers and Luvs branded diapers, turned in the lowest growth in the company. Worse yet, the division suffered from falling prices so that its organic sales growth rate trailed its volume uptick.

Pampers wasn't the problem. In fact, that franchise continued to gain share against Kimberly-Clark's (NYSE:KMB) Huggies brands. Luvs lost ground, though, in the core U.S. market. P&G was also forced to lower prices in Europe to hold share against Huggies and other rivals. Finally, the baby care portfolio saw weak overall growth in China.

P&G's challenge ahead is to scale the success it managed in its U.S. battle with Huggies over the last five years to other markets. The stakes are high, given that Pampers is its single biggest brand, responsible for $9 billion of annual sales last year.

P&G didn't have much flexibility on this score. After all, with earnings headed lower for the second straight year even a tiny raise would still keep its payout ratio uncomfortably high at more than 70% of profits. That's no relief for long-term investors who count on the Dividend Aristocrat to increase its payout at a faster pace than inflation, though.

The good news is that profits are trending higher in fiscal 2017 and so the company should have more room to lift its dividend next year. Meanwhile, investors will need to settle for share repurchases as the main vehicle by which P&G returns cash directly to them, at least until P&G's payout ratio drifts back down toward a more manageable 50% of profits.