Shares of Yum! Brands, Inc. (NYSE:YUM) fell 26.3% in the month of November, according to data provided by S&P Global Market Intelligence, after the fast-food restaurant specialist completed the separation of its China business, Yum China Holdings, Inc. (NYSE:YUMC).

But this drop wasn't the result of some negative market reaction to the move. As part of the planned separation -- which was originally announced in Oct. 2015 -- Yum! Brands investors received one share of Yum China stock for each share of Yum! Brands they owned as of the close of business on Oct. 19, 2016. As of this writing, Yum! Brands stock trades at approximately $64.20 per share, and Yum China stock trades at $28.20 per share. 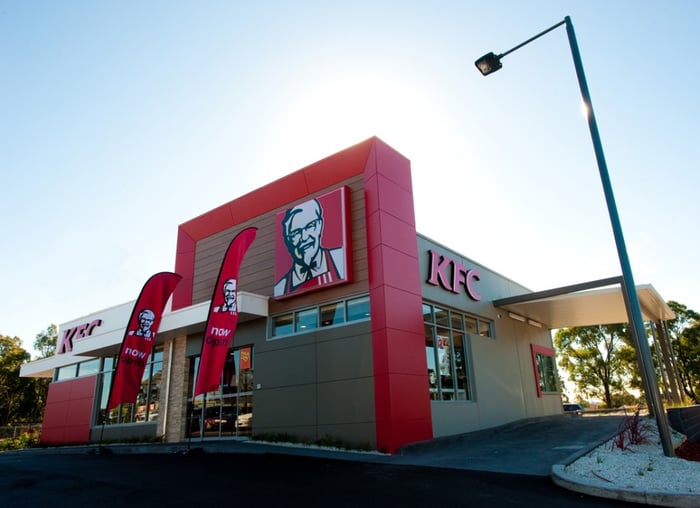 In the end, Yum! Brands' separation was a zero-sum game in terms of investors' dollars. But Yum! Brands itself is now more effectively positioned to execute the growth strategy and business transformation outlined at its annual investor conference in October. More specifically, Yum!'s vision includes implementing an optimized capital structure, continuing to grow its traffic and base of nearly 43,000 KFC, Pizza Hut, and Taco Bell restaurants, and setting a goal of becoming at least 98% franchised by the end of fiscal 2018 (up from 77% in October).

Subsequent to the formal separation, Yum! Brands' board also authorized a new incremental repurchase plan of up to $2 billion in shares of common stock through the end of 2017.

Meanwhile, Yum China is comprised of over 7,300 restaurants in more than 1,100 cities, making it the largest independent restaurant company in China with exclusive rights to the KFC, Pizza Hut, and Taco Bell brands in the country, as well as ownership of the Little Sheet and East Dawning concepts. And over the long term, Yum China sees potential to triple its number of restaurant units. To be fair, these might sound like enormous figures -- and they are -- but, for perspective, keep in mind McDonald's (NYSE:MCD) already operates more than 14,000 restaurants in the United States alone.

In short, Yum! Brands' 26.5% drop last month is not cause for concern. Rather, it should leave the resulting two companies poised to better compete and succeed in the increasingly competitive fast-food market going forward.