Comcast (NASDAQ:CMCSA) posted its Q3 earnings on Oct. 26 and momentum from those results pushed its stock steadily higher through the month of November. 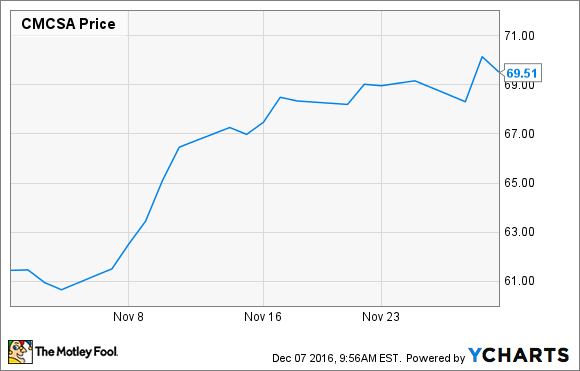 The cable, internet, and media giant had solid results across the board. It reported that consolidated revenue increased 14.2% over Q3 last year. In addition earnings per share climbed by 15% to $0.92. Perhaps most interestingly the cable division added 32,000 video customers in a quarter where most of its rivals lost users. This continues a trend where Comcast has done a better job holding onto subscribers than its rivals.

Comcast has continued to impress with its cable business. In addition to adding video subscribers, the company saw its total customer relationships increase by 216,000, a 60,000 improvement from the third quarter last year. Comcast also saw its total revenue-per-customer go up by 3.5% in its cable group.

The company also posted a big gain at NBCUniversal, where revenue increased 28.3% and at its theme park group which saw operating cash flow jump 62.4%. The company attributed that to the inclusion of Universal Studios Japan, as well as the continued success of The Wizarding World of Harry Potter in Hollywood.

Comcast has been firing on all cylinders and it has been bucking industry trends in its cable group. The company has an impressive movie slate to look forward to over the next couple of years, and its theme parks should be able to continue riding the momentum created by Harry Potter.

"I'm pleased to report that our businesses generated double-digit revenue and operating cash flow growth for the third quarter of 2016," said CEO Brian Roberts in the earnings release. "... I'm proud of our consistent execution and excited about the opportunities ahead for Comcast NBCUniversal."

It's hard to see a slowdown anytime soon for the company. It may ultimately start to lose video customers, but it should more than make that up by increases in price and subscriber count on the broadband side. Comcast faces a continued competitive environment for most of its products, but it seems to have figured out how to succeed in its key business areas despite that.