Shares of Buffalo Wild Wings (NASDAQ:BWLD) climbed 15.8% in the month of November, according to data provided by S&P Global Market Intelligence, primarily following the results of the U.S. presidential election.

To be fair, part of of Buffalo Wild Wings' rise last month could be attributed to sustained momentum following the casual dining restaurant chain's solid third-quarter 2016 report in late October. After all, shares climbed nearly 6% the following day as investors digested those results, which included negative -- but improving -- same-store sales and a modest 8.5% increase in quarterly revenue, to $494.2 million. Buffalo Wild Wings also outlined several sales-driving initiatives including the ongoing rollout of its new Blazin' Rewards loyalty program, new versions of its mobile and online ordering apps to drive takeout sales, and a significantly expanded test of third-party delivery at 90 company-owned locations.

But even then, a quick glance at Buffalo Wild Wings' chart from the beginning of November shows the stock enjoyed a strong, market-beating uptick coinciding with Donald Trump's election victory: 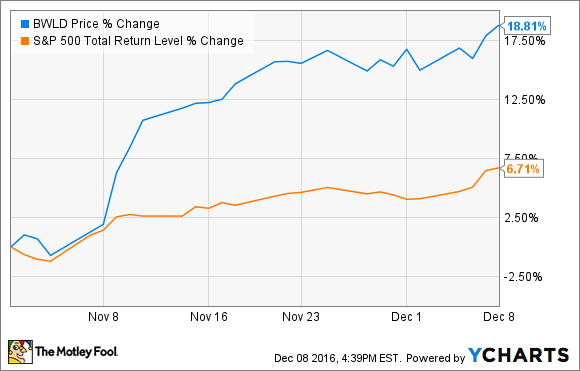 As it turns out, Buffalo Wild Wings wasn't alone; casual dining juggernauts including Olive Garden parent Darden Restaurants and Applebee's owner DineEquity each climbed 22% and 12%, respectively, over the same period depicted above.

If you're wondering why casual dining chains might be better off under Trump as president, look no further than his stance on minimum wage. Well, Trump's exact stance on minimum wage isn't entirely clear at this point, but he did spend a significant amount of time on his campaign trail talking down the possibility of a minimum-wage hike.

That said, Trump also softened his stance in the months leading up to the election, vaguely suggesting that while he "would like to see an increase of some magnitude," he would also prefer to leave the exact magnitude of any increase to each states' discretion. What's more, the latest reports indicate it's increasingly likely that Trump will choose CKE restaurants CEO Andy Puzder -- an outspoken opponent of a federal minimum wage increase -- as his secretary of labor.

Either way, those would be positive developments that could stem the rise of the often-lofty labor costs of casual dining restaurants like Buffalo Wild Wings. As such, and given the progress B-Dubs already demonstrated in its latest quarter, it's no surprise to see shares continued to rise last month.