If you're a fan of wind power, solar power, electric vehicles, or any other form of alternative energy or transportation, you should be cheering OPEC's recently announced agreement to cut 1.8 million barrels per day in production from both OPEC and non-OPEC countries' supply. Most of the reaction on the stock market related to oil stocks surging, but this is really great news for alternative energy as well.

The reason comes down to the other half of the energy equation we often don't talk about. The simple fact of the matter is that many in the industry are beginning to talk regularly about how quickly the cost of solar energy is falling or how cheap batteries for electric vehicles (EVs) are becoming. But the other side is the fossil fuel energy they're competing against. Higher oil prices make EVs more attractive on a cost basis and will make corporations, consumers, and governments think twice about where they're spending energy dollars in the future. Rising oil prices is the push alternatives need.

The dollar drives everything

If you look at the growing adoption of solar energy, wind energy, energy storage, and electric vehicles -- the four biggest cogs in a renewable energy future -- they've all been driven primarily by economics over the past decade. Tesla's (NASDAQ:TSLA) SolarCity subsidiary grew on the back of a $0 down solar lease and wind and solar energy are winning competitive bids for electricity contracts around the world. New technologies like energy storage are helping commercial customers lower electricity bills and costs are improving constantly. To top it off, EVs are starting to take off just as cars priced around $35,000 are hitting the market.

Subsidies get a lot of coverage in the media, but non-fossil fuel forms of energy are competing with fossil fuels because they're a lower-cost option and that cost advantage is improving by the day. Higher oil prices only improves the competitive advantage of alternative energy, which makes it more attractive to buyers like utilities and corporations making choices about where they're going to get energy in the future.

The perception battle in energy

One of the strange dynamics in energy is that oil dominates perception of what sources of energy are competitive. Even in solar energy, where the competition is really with coal and natural gas, when oil is high people love the idea of solar energy, and when oil is low investors just don't believe in the solar future.

This can be seen on the stock market, where solar manufacturers and developers First Solar (NASDAQ:FSLR) and SunPower (NASDAQ:SPWR) have long been impacted directly by the price of oil. Look below at their performance as oil prices dropped in 2014. As oil fell, so did their stocks, even though they're not really related businesses. 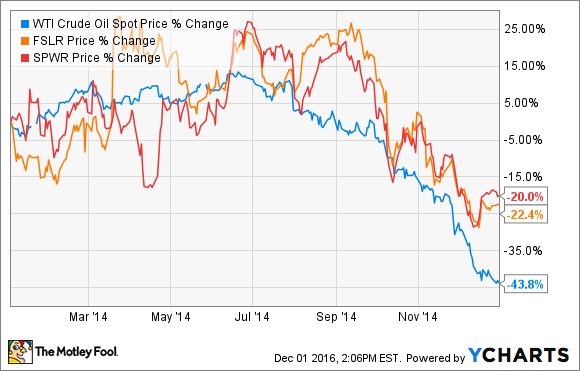 Whether you're thinking about putting solar on your roof or buying your next vehicle, the perception of energy prices is just as important as the real price you pay for energy. And increasing oil and gasoline prices are maybe the best reminder of what energy costs, whether or not they directly compete with alternative sources of energy.

Where we can expect to see winners

If oil prices do rise, I would expect that to have a major impact on the adoption rate of electric vehicles. Tesla is clearly leading the charge there led by the Model S and upcoming Model 3, but General Motors' (NYSE:GM) Chevy Bolt hitting the market later this year will be worth watching if gasoline heads toward $4 per gallon again. EVs can justify themselves on economics alone if gas prices rise. It costs about $12 to fill a Model S with over 300 miles of range, compared to $40 or more if gas is $4 per gallon. So, rising gas prices will make EVs more competitive just as low cost EVs hit the market.

Solar and wind energy will also be winners, particularly on the utility side. When wind and solar projects are built, they come with long-term power purchase agreements, setting the price of electricity for a utility. Rising oil prices will be another hard reminder that commodity risk falls on consumers, and with the cost of renewable energy now competitive with fossil fuel across the country, it'll be a risk regulators won't want to ask customers to take.

On the consumer end of things, we could see another big solar push as well. What better way to break free of foreign oil than by putting solar on your roof and using it to charge your electric vehicle?

Surging oil prices may be just what alternative fuels and renewable energy need heading into a Trump administration. And it looks like they'll be here just in time.