Shares of Atwood Oceanics (NYSE:ATW) continued their recent ascent, jumping more than 11% by 10:45 a.m. EST on Friday. The stock is now up 86% over the past month, with the bulk of those gains coming since OPEC signed its agreement to cut output at the end of November: 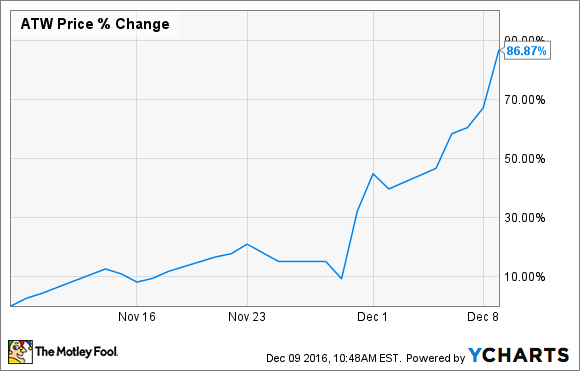 There aren't any catalysts fueling today's move. While crude oil is up 1.5%, to $51.50 a barrel, that is not a significant move considering how volatile prices have been over the past month. Further, that price point is not high enough to move offshore drilling projects forward, which is what Atwood needs to do to secure new leases for some of its idle drilling rigs.

It is unclear how long it will be before crude hits that pivot point, which is why Atwood recently secured a deal to push back the delivery dates and milestone payments for its last two newbuild ultra-deepwater drillships. Under the terms of that agreement, which it signed on Tuesday, the company was able to push back the delivery of its Atwood Admiral and Archer by two years, to September 2019 and June 2020, respectively. Those moves boosted the company's liquidity by $250 million by pushing back the final payments until the end of 2022. This agreement shows just how cautious the company is in relying on a recovery in the offshore drilling market.

Improving liquidity has been a major focus for offshore drillers in the wake of the OPEC agreement. That explains why rivals Transocean (NYSE:RIG) and Rowan (NYSE:RDC) both issued senior notes this week. Transocean issued $625 million in 6.35% senior notes due in 2024 to partially finance the construction of its Deepwater Proteus newbuild. Meanwhile, Rowan issued $500 million of 7.375% notes due in 2025 to refinance nearer-term debt maturities, including notes maturing next year. By increasing their liquidity now, Transocean, Rowan, and Atwood Oceanics will have more breathing room later on if the OPEC deal does not boost oil prices or offshore drilling activities as quickly as hoped.

While investors are growing more optimistic about a potential improvement in the offshore drilling market, drillers are much more cautious. That is evident in their decision to take advantage of the market's optimism and boost liquidity, just in case reality turns out to be less rosy than the current optimistic outlook.