Polaris Industries Inc. (NYSE:PII) and Arctic Cat Inc (NASDAQ:ACAT) are two of the most iconic names in recreational vehicles in the U.S. But they've had very different histories in the business.

Arctic Cat is synonymous with snowmobiles and winter weather, while Polaris has spent years building out a diverse business of motorcycles, side by sides, and now the Slingshot. For investors, these companies may look similar from the outside, but they're very different when you look under the surface.

What happened to winter?

There are few companies as tied to the weather as Arctic Cat. The company's main business has always been snowmobiles, with 41% of sales expected to be snowmobiles this year. And therein lies the company's problem.

Through the first week of December, there was little snow cover in most of Minnesota -- where both Arctic Cat and Polaris are headquartered -- and the Rocky Mountains just got their first significant snow of the year. This exacerbates the warm weather last year, which hurt winter sports across the country. If you live in snow country, it's undeniable that winters are getting shorter and warmer.

Arctic Cat may not be able to control snowfall, but it's taking the brunt of mild winters. And despite an attempt to shift to off-road vehicles in product development the business was down 29% in the first half of this fiscal year. Meanwhile, Polaris has a long head start in off-road vehicles and has grown its motorcycle business rapidly of late, reducing its reliance on winter product sales. Strategically, Polaris is simply in a better place.

Polaris' road hasn't been easy either

Polaris has had a rough 2016 as well, but for self-inflicted reasons. Recalls of multiple products have hurt both sales and margins, and many repairs are taking longer than expected.

But from a broad perspective, Polaris has made key moves to improve products that aren't reliant on winter. Buying Indian and developing Slingshot are two examples, but the trend extends into off-road vehicles like RZR side by sides as well. 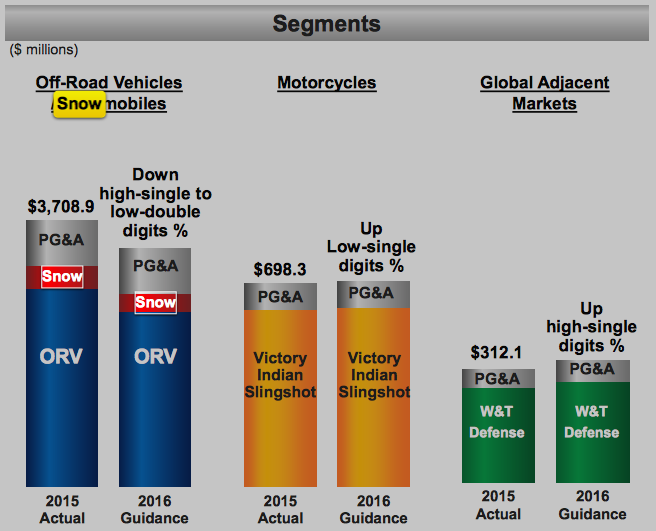 Whereas Polaris gets a small percentage of sales from the snowmobile market, Arctic Cat is expecting 41% of sales to come from snowmobiles. Polaris may not be having a great year short-term, but it's riding strong long-term trends in recreational vehicles. On the other hand, Arctic Cat is heavily invested in a winter segment that's struggling long-term, and that's what should worry investors.

Without winter sales, Arctic Cat is in tough shape. You can see below that the company is losing money and is performing much more poorly than Polaris. 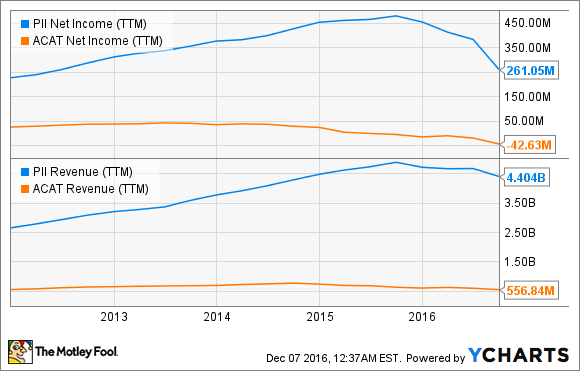 This puts management in a bind. They need to invest in new products to remain competitive, but need to cut costs to regain profitability. And that's where Arctic Cat has made some head scratching moves.

Over the past decade, in an effort to become "cooler" for engineers and product developers, the company has moved from Thief River Falls, where snowmobiles and ATVs are part of the culture, to downtown Minneapolis, where snowmobiles and unicorns are seen with similar frequency. Despite snow products being in decline long-term, management is adding new snow products like the SVX 450, a "snow bike" that was supposed to inspire a new generation of enthusiasts. Furthermore, a focus on off-road vehicles hasn't gained much traction with revenue in those product lines falling 29% in the first half of this fiscal year.

While management may talk about wanting to grow, I just don't see where the profitable opportunity are. Winters have been getting warmer in the northern U.S., and the trend shows no sign of slowing long-term and off-road vehicles aren't catching on as hoped. That's trouble for a company built on winter as a business.

Polaris is the best stock today

Given the diversity and better profitability, Polaris is a better stock than Arctic Cat. And it's worth watching whether or not the Arctic Cat business will be able to recover if it's another slow winter season. As I watch winters in Minnesota get warmer and shorter, I have my doubts.