Shares of home furnishings retailer Restoration Hardware (NYSE:RH) surged 24% last month according to data form S&P Global Market Intelligence. Though there was little news out on the company, the luxury retailer benefited from Donald Trump's election victory and recovered some of its losses from earlier in the year. 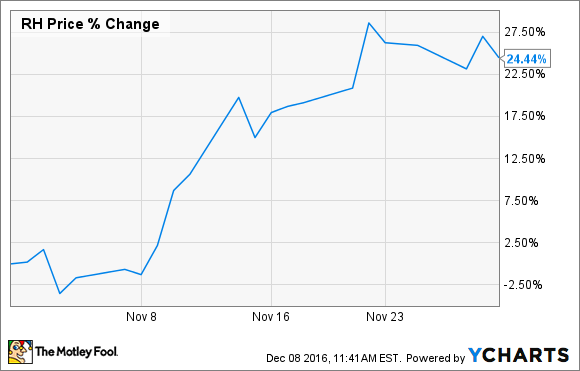 As you can see from the chart above, much of the stock's gains came following the election as shares increase 21% over the four sessions after Trump's victory. The market seems to believe the high-end retailer will benefit from lower taxes on the wealthy as they will have more money to spend at establishments like Restoration Hardware. Arguably, the upscale retailer stands to benefit more than any other consumer-facing company from such a policy, especially since the stock is still down more than 50% this year because of plummeting profits as it's made unforced errors in shifting sales models and rolling out the new RH Modern line.

The stock continued to climb through the first week of December as investors anticipated its third-quarter earnings report, but then plunged after it came out on Friday, falling as much as 20.5%.

The results actually beat estimates, but fourth-quarter guidance was well below expectations.  For the third quarter, the company reported EPS of $0.20, above the consensus at $0.16, while revenue rose 3% to $549.3 million, also topping estimates at $527 million. However, those results were overshadowed by a weak outlook for the key holiday quarter as it sees EPS of just $0.60-$0.70 versus estimates of $0.98, and revenue of $562-$592 million as opposed to the Wall Street view of $627 million.

CEO Gary Friedman again had a number of excuses, including anxiety over the election, a delay in mailing out its source book, and a change in how it recognizes revenue as it moved from a promotional and membership model. Despite those claims, the majority of its problems are self-inflicted. I'd stay away from the stock until further evidence reveals it's overcome these challenges.