I recently highlighted some key facts, top stocks, and market trends in the retail sector. However, I also noted that the sector can be a minefield for investors, due to fickle consumer tastes, tough competition, and e-commerce challenges. Today, I'll discuss two potential landmines investors should avoid -- Gap (NYSE:GPS) and Abercrombie & Fitch (NYSE:ANF). 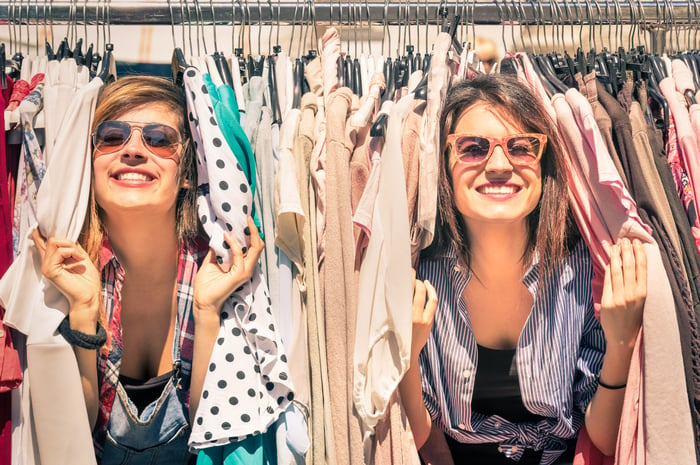 On the surface, Gap looks like an undervalued income play. The stock trades at just 16 times earnings, which is much lower than the industry average of 24 for apparel stores. It pays a forward dividend yield of 3.7%, which is comfortably supported by a 52% payout ratio, and it's raised that payout annually for the past six years.

Unfortunately, analysts also expect Gap's sales and earnings to respectively fall 3% and 21% this year due to tough competition from "fast fashion" rivals like Inditex's Zara and H&M, which cycle through collections within weeks instead of seasons. Gap already posted seven straight quarters of comparable store declines, and all three of its brands (Old Navy, Gap, and Banana Republic) are looking wobbly. Old Navy outperformed Gap's other two brands in comps growth in recent quarters thanks to the leadership of former H&M exec Stefan Larsson. Unfortunately, Larsson resigned earlier this year to become the CEO of Ralph Lauren.

Looking ahead, CEO Art Peck plans to mimic Zara's strategy of using analytics and data research, instead of the direction of creative designers, to choose its fashions. That strategy paid off for Zara, which employs 350 designers to distill those trends into its designs, but it could backfire for Gap if it blindly chases data-fueled trends without any creative discipline. Unless Gap can demonstrate sustainable growth across its three core brands and break its streak of sales declines, I'd steer clear of this troubled retailer.

Like Gap, Abercrombie & Fitch was crushed by rising fast fashion competitors. Its marketing strategies and fashions seemed stuck in a previous decade, with its heavily scented stores and logo apparel attracting more ridicule than shoppers. Its eccentric former CEO Mike Jeffries was also pilloried for comments about how Abercrombie's clothes were "exclusionary" and not designed for unattractive people.

A&F's latest strategies include phasing out its logo apparel, shuttering stores, turning down the music and "scent levels" of its stores, and rebranding itself with marketing campaigns focused on "self-confidence" and "inner confidence." While those moves are arguably steps in the right direction, A&F's weak comps growth suggests that shoppers aren't paying much attention. Analysts expect the company's revenue to fall 5% and its earnings to dip into the red this year.

A&F generated just $7.9 million in net income last quarter, compared to $41.9 million in the prior year quarter. That puts its forward dividend yield of 5.4% in jeopardy, since its payout ratio of 123% looks unsustainable. Its trailing P/E of 86 also looks dangerously high relative to its industry peers.

I'm not saying that Gap and A&F won't ever recover, but the road back is clogged up by decades of negative brand perception, over-extended brick-and-mortar footprints, and unclear strategies for countering fast fashion and e-commerce rivals. Therefore, I believe that investors should be very picky with retail stocks, and only stick with companies that have consistent comps growth and effective marketing strategies.