Cancer continues to be one of the leading causes of death. However, next-generation treatments are making their way through clinical trials, and they may offer new hope to millions of patients. Among the most intriguing of these new medications are three that are coming out of Merck & Co. (NYSE:MRK), Ariad Pharmaceuticals (NASDAQ: ARIA), and Kite Pharma (NASDAQ: KITE). Let's take a closer look at how these drugs could improve cancer treatment soon. 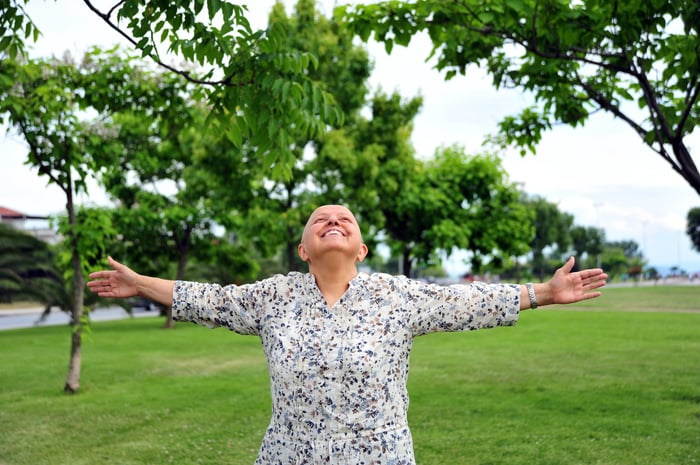 The 2015 launch of checkpoint inhibitors that switch off proteins that help cancer hide from the immune system kicked off what could be the most game-changing advance in cancer treatment.

One of the first of these checkpoint inhibitors to pass the FDA gauntlet is Merck & Co.'s Keytruda, a PD-1 inhibiting drug that is a linchpin of Merck's R&D program.

Initially approved for use in cancer after other treatment approaches have failed, Keytruda is showing that it's much more than a late-stage player. In October, the FDA expanded Keytruda's label to include its use in first-line treatment of patients with metastatic non-small cell lung cancer (NSCLC) whose tumors have high (at least 50%) PD-L1 expression and no EGFR or ALK mutations.

That approval was based on phase 3 studies showing Keytruda is superior to chemotherapy. Keytruda improved progression-free survival, overall survival, and objective response rate, while providing a 50% lower risk of death or cancer progression.

That's pretty remarkable, and it could elevate Keytruda's standing in this important new class of medicines. Currently, Bristol-Myer's Opdivo is the top-selling checkpoint inhibitor, but that could change because Opdivo failed to outperform chemotherapy in this first-line setting earlier this year.

Keytruda's approval for first-line use in metastatic NSCLC doesn't include patients who are ALK-positive, but Ariad Pharmaceuticals' brigatinib may allow those patients to live longer, too.

In brigatinib's trials, 55% of patients responded to the drug, and patients with brain metastases saw intracranial progression-free survival of 18.4 months.

Ariad has already filed with the FDA for brigatinib's approval in this indication, and the FDA is slated to issue a go/no-go decision on brigatinib in April. If they green light brigatinib, then it could offer significant new hope to previously treated ALK-positive patients soon thereafter.

For patients battling tough-to-treat blood cancers, supercharging T-cells so that they can better find and destroy cancer cells is getting closer to becoming a new treatment option.

Kite Pharma is reengineering T-cells so that they can recognize the CD19 protein, which is found on the surface of B-cell cancer cells. In mid-stage studies, introducing these engineered T-cells back into patients is delivering impressive cancer-fighting results.

For perspective, Kite Pharma conducted a retroactive analysis of outcomes in this patient population to show how existing approaches are falling short. In their study, they found that, historically, only 26% have responded to treatment, including just 8% who achieved a complete response.

Clearly, KTE-C19 offers a potential to significantly improve how doctors treat DLBCL, and as a result, Kite Pharma recently initiated a rolling filing for KTE-C19's FDA approval. Management expects to complete KTE-C19's application in the first quarter of 2017, so assuming that the FDA fast-tracks its decision, this new cancer-curbing approach could reach the market before the end of next year.