Canadian Solar Inc. (NASDAQ:CSIQ) has built itself into one of the largest solar manufacturers in the world and become one of the biggest publicly traded solar companies as well. But scale in the solar industry hasn't necessarily led to success and profitability long term.

If you're looking to jump into solar stocks and considering Canadian Solar, here are a few things to think about. How to build scale in solar

What's worth noting is that debt has grown far more quickly than revenue over the past two years, which could lead to financial problems over the long term. 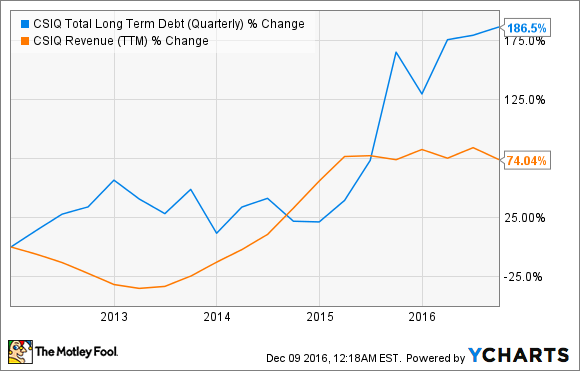 What you see here is a big investment in capacity expansion (debt) without the same increase in revenue because solar panel prices are falling. This makes it difficult to make money long term because the prices of solar components are constantly dropping so the return on building out capacity will only decline over time.

But interest still has to be paid on debt and eventually the debt itself has to be repaid. If revenue and profits aren't rising as quickly as debt, it's a worrying trend.

When Canadian Solar was reporting massive profits in late 2014 and early 2015, they were driven by a few projects the company built in Canada. Because of limits on Canadian-made equipment, the projects had very little competition and came with extremely high margins, which were great for the bottom line. But the windfall won't last forever. 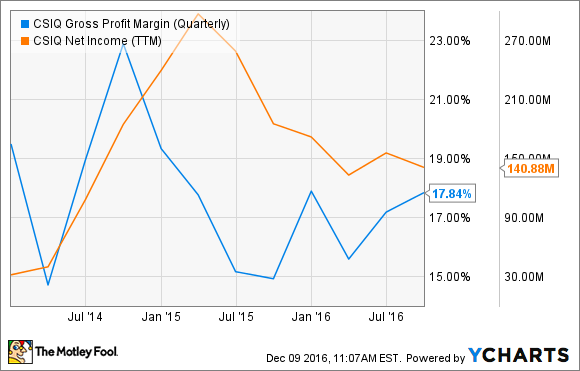 More recently, margins have come down to the mid-teens, in line with other commodity solar panel manufacturers. And the chart above doesn't show much impact from the recent plunge in solar panel prices on the spot market. According to competitors, panel prices fell 25% in the third quarter, and with weak demand expected in 2017, prices aren't expected to recover. The price decline could eat up all of Canadian Solar's gross margin, making profits nearly impossible in the next year, which is exactly what competitors are expecting.

Softening the blow of a tough 2017

I've highlighted a couple of challenges facing Canadian Solar, which aren't unique in today's solar industry. But one advantage the company has is a significant amount of cash on the balance sheet (see below) and $1.2 billion of project assets that it intends to sell. 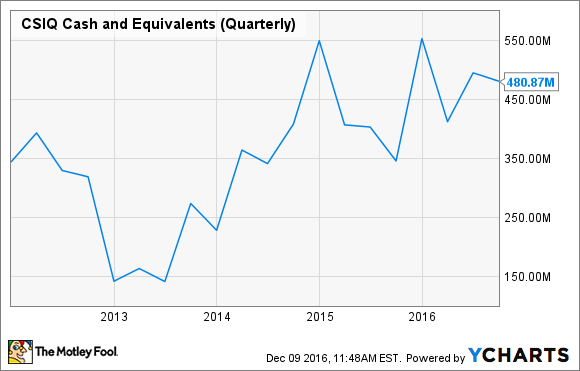 The cash and project assets could help ease the pressure from a down year in 2017, which is a huge strength for Canadian Solar. Selling projects would also likely reduce debt on the balance sheet, reducing risk in the long run.

As investors look at companies prepared to weather a tough year in 2017 they'll want to look at what competitive advantage companies bring to the table. Canadian Solar isn't an industry leader in technology, but it has scale, a massive balance sheet with lots of projects it can sell, and an industry-leading cost structure. Those factors won't guarantee success, but they'll give Canadian Solar a better chance than many rivals and that's a positive for investors looking for companies built to last for the long term.