"Continued schedule breaches and performance issues in the development of the Air and Space Operations Center Increment 10.2 upgrade have triggered a critical change report and will likely push an already-delayed milestone C decision two years to the right -- from June to a tentative date of summer 2018."

That's how InsideDefense.com described the difficulties Northrop Grumman (NYSE:NOC) has been having getting its "AOC 10.2" project off the ground back in July. As we've just learned, things aren't looking any better in December. 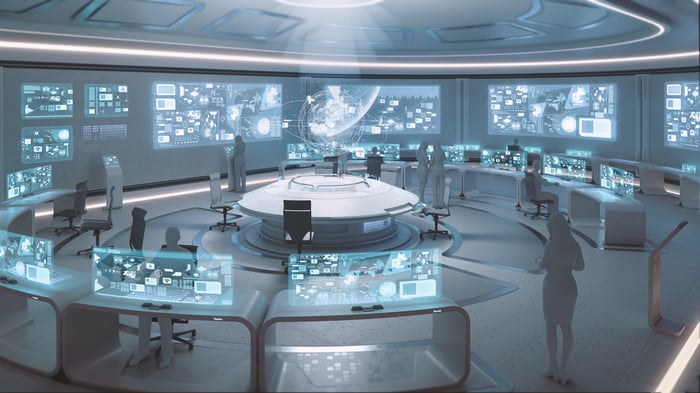 AOC 10.2 (not pictured) promises to remake how the Air Force conducts combat -- if Northrop Grumman can get it done. Image source: Getty Images.

Northrop Grumman characterizes the Air Operations Center project as "vital to the national interest and a major advance in C2 capability for air components supporting combatant commanders throughout the globe." By converting "raw data into actionable information," AOC 10.2 aims to streamline the movement of data within the Air Force. Utilizing less hardware and better software, AOC 10.2 will simplify the Air Force's current system of 43 separate software applications into a more unified whole, while simultaneously hardening the system to resist hacking.

It's a big job, and one that the Air Force budgeted $3 billion to pay for and about four years to complete. The problem is, Northrop Grumman doesn't seem likely to complete the job within budget, or on time, either.

This isn't the first time troubles have surfaced with AOC 10.2. In addition to the July rebuke, Bloomberg says the Air Force warned Northrop that its progress was unsatisfactory in 2014, and 2015 as well. As recently as August, the Air Force's program manager for the AOC 10.2 noted that fewer than half of 218 identified "urgent" problems with the program had yet been fixed.

This is important to investors because Northrop Grumman negotiated a cost plus incentive fee contract for AOC 10.2, whereby the program was assigned a target cost ($3 billion) and Northrop Grumman's profits would largely depend on incentives for meeting or beating that cost. The longer Northrop takes to fix the problems with AOC 10.2 and complete the project, the less likely it is to receive these incentives -- and the less profit it will earn.

That's disappointing. According to data from S&P Global Market Intelligence, Northrop Grumman's Mission Systems division -- responsible for the AOC 10.2 project -- is currently the company's biggest profit driver, earning Northrop $1.06 billion in pre-tax profit through the first three quarters of this year. On $8.1 billion in revenue, that worked out to a 13% operating profit margin for Mission Systems, the strongest profit margin posted by Northrop's three main businesses.

Delays and cost overruns at AOC 10.2 have the potential to sap this division of profits, however, and by extension decrease profitability for Northrop Grumman as a whole.

Overbudget and Behind Schedule: A New Normal for Northrop Grumman? @themotleyfool #stocks $NOC Next Article
Current