In some ways, 2016 has been a great year for Square (NYSE:SQ). After providing an outlook at the end of 2015 to turn adjusted EBITDA positive this year, it raised its adjusted EBITDA outlook every quarter. The outlook at the start of the year was just $6 million to $12 million. Square's latest revision has it producing $31 million to $33 million in adjusted earnings before interest, taxes, depreciation, and amortization this year. 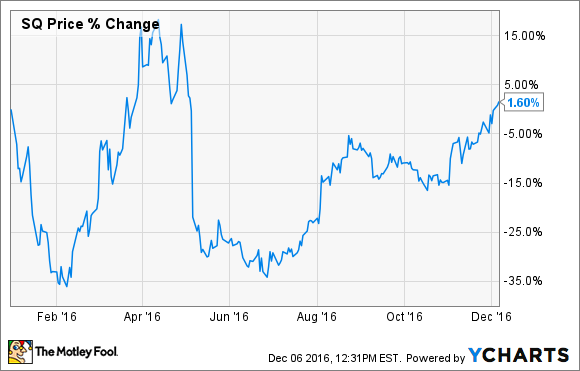 Ultimately, fundamental execution will move the stock higher. With that in mind, here are three things that could cause Square stock to rise.

While larger sellers often have more complex demands, Square notes it's able to produce the same profit margins from larger sellers as from smaller sellers. That's important because it means Square could recoup its hardware costs faster at larger sellers than smaller ones, as larger sellers generate more sales per device. Square says the average merchant becomes breakeven after four to five quarters. Bringing in more larger merchants could reduce that time to less than one year.

The draw of Square isn't just its ability to quickly allow businesses to accept credit cards, it's the entire ecosystem of Square's technology. Payment processing is just the means it uses to monetize that technology.

Square is constantly expanding into new verticals and leveraging its seller data to provide a competitive advantage. Square Capital is just one example. Square also offers services like Instant Deposit or Invoices for merchants that need money in their bank account today or need a recurring payments solution.

Last quarter, software and data revenue increased 140% compared to consolidated revenue growth of 32%. Continued investment in new products and services should fuel growth in the higher-margin segment while producing a strong moat for the business.

Both PayPal (NASDAQ: PYPL) and Intuit (NASDAQ: INTU) provide similar solutions to Square for in-store payments, but neither have the full ecosystem of tools that Square does. So, even though both companies undercut Square on payment processing prices, Square is generally able to retain its customers at a decent rate.

Square's investments in new products have held it back from producing significant profit growth, but there are signs that it's starting to exhibit economies of scale. Its general and administration expenses grew 38% last quarter, a slowdown from 60% the previous quarter. Likewise, product development expense growth slowed to 28% in the third quarter, down from 50% in the second quarter and 63% in the first quarter.

As revenue growth continues to climb (adjusting for the loss-making Starbucks contract), Square stands to produce significant economies of scale. Its new products, which mostly fall into its software and data segment, can be sold into a larger customer base, making every dollar of R&D go further.

There's the risk, of course, of product development missing the mark. Indeed, Square's 2014 acquisition of Caviar -- a food delivery service -- hasn't panned out in terms of overall profitability. The company has reportedly been in talks of selling the service.

But scale allows Square to take more swings. Even if it misses a few times, its hits have a better chance of going over the fence, so to speak.

All three of the above factors ought to contribute to meaningful profit growth over the next few years. As Square grows into its lofty valuation -- 145 times adjusted EBITDA outlook -- these factors will play a larger role in moving the stock one way or another. As long as Square's management can continue executing on all three, it should drive the stock price higher over time.