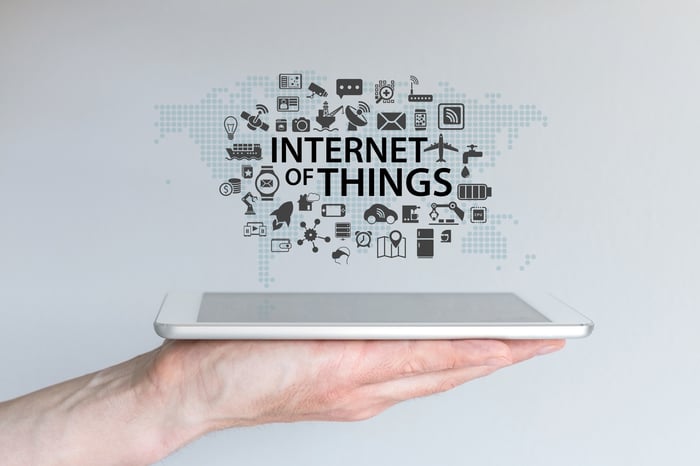 The Internet of Things (IoT) describes the growing network of connected sensors and devices, and the increasing connectivity is already having significant impacts at the consumer, enterprise, and public levels. Research firm Gartner expects the number of IoT devices to grow from 6.4 billion in 2016 to nearly 21 billion in 2020, and estimates that more than half of new business systems and processes will utilize the Internet of Things by the end of that period. Growth in device connectivity and machine-to-machine communication is creating an explosion of new data, and this information is being sorted and analyzed to produce insights that can improve efficiency and drive substantial economic value.

With the Internet of Things triggering big shifts in commerce and industry, some of the companies leading the push are poised to be major beneficiaries. In order to help investors ride the trend, we've asked three Motley Fool writers to pick their top Internet of Things stock. Read on to learn why Amazon (NASDAQ:AMZN), Verizon (NYSE:VZ), and Cisco Systems (NASDAQ:CSCO) made the list.

Buy the network, not the device makers

Brian Feroldi (Verizon): There's no doubt that the Internet of Things trend offers tremendous growth opportunities for all kinds of tech companies. However, I personally do not think that buying an electronic hardware manufacturer is the right way to play the trend. The reason? Huge growth potential will attract a lot of competition. Over time, that competition will erode away profit margins, leaving investors with poor returns.

For that reason, I think it is a far smarter idea to buy shares of a cellular network provider like Verizon Communications instead. After all, those billions of devices that are expected to come online will need access to a mobile network in order to work. That provides Verizon with a great new avenue for growth in the years ahead.

You might not be aware of it, but Verizon is already benefiting from the IoT trend. Last quarter, Verizon's IoT revenue grew by 24% to $217 million, making it one of the company's fastest-growing divisions. Sure, that's still just a drop in the bucket when compared with the company's wireless and wireline revenue, but over time IoT revenue holds promise to grow like wildfire. That could help propel the company's long-term revenue and profit growth.

Verizon certainly believes that the IoT represents a huge opportunity, which is why it is investing accordingly. Earlier this year, Verizon bought Telogis and Sensity Systems, both of which will add to the company's IoT product offering. Over time I think investors should expect even more bolt-on acquisitions to ensure that it maintains a strong foothold in this important and growing market. Throw in a dividend yield that tops 4.6% and I think Verizon is a great way for conservative investors to get their IoT exposure.

Chris Neiger (Amazon.com): The e-commerce giant probably isn't the first company you think about when talking about the Internet of Things, but I think it has a few key advantages in the space.
First, Amazon is already a leader in the consumer IoT space. Its Echo speaker is paired with its robust virtual assistant, Alexa, to power everything from turning on the sprinklers to ordering an Uber. This may not seem earth-shattering right now, but Amazon continues to open up Alexa to developers to connect the virtual assistant to even more devices and tasks. As it does that, I think it'll continue to lead in the house-automation space.
The second advantage is the company's Dash Replenishment Service (DRS). This built-in software allows home electronics like washing machines to automatically order more detergent from Amazon's website when they notice that they're running low. Automation is a key ingredient in the IoT, and Amazon is making this a reality and already has General Electric, Samsung, and Whirlpool on board. DRS may take a while to take off, but as it does you'll see Amazon lock customers -- and device makers -- even further into its retail ecosystem.
And last but not least, Amazon's true IoT opportunity comes from its cloud server business, Amazon Web Services (AWS). It's no secret that Amazon's AWS business is booming, bringing in $3.2 billion in the third quarter of this year, and $11 billion over the past four quarters. And the company is leveraging that success for the IoT as well, by pushing its AWS IoT platform. AWS IoT allows developers to interact with connected devices and helps them collect and analyze data. With so many companies and developers already using AWS for their hosting needs, I think it'll be natural for them to migrate to AWS IoT as more devices come online.
Amazon's lead in the cloud-computing space, along with its own IoT platform, means that the company is poised to benefit from the nearly 50 billion IoT devices that will be online by 2020. Even if Amazon fails in the consumer IoT space, its AWS offerings in the IoT space will benefit the company for years to come.

Own the company that owns the network

Keith Noonan (Cisco): Overcoming security and standardization issues that arise from moving data between disparate devices and networks is one of the main obstacles to the evolution of connectivity, and no company is better suited to deal with it than Cisco. The company's Internet of Things and Applications Group vice president, Rowan Trollope, recently said that the company can deliver many of the connectivity and security needs brought on by IoT because "it owns the network." There's some simplification involved in that statement, but Cisco's leading position in networking means that the company is going to have a formative impact on the progression of IoT.

The company is in the process of giving device makers tools and applications-programming interfaces to help with standardization and to cut down on security threats that could limit the progression of the tech. Cisco is taking these steps to get the big players on board with its network and certification process in order to facilitate its transition to a more subscription-based business model. This year, the company purchased Jasper Technologies for $1.4 billion in order to bolster its service offerings and fast-track its position in IoT connectivity and analytics platforms.

The big connectivity push also presents opportunities that could lift Cisco's hardware businesses. The networking giant has partnered with Ericsson, Intel, and Verizon for the development of a 5G mobile router, and could benefit from demand for routers and switches that are tailored for customers' IoT needs.

Priced at just 12.5 times forward earnings estimates, with roughly $40 billion in cash and short-term investments on the books, and a 3.5% dividend yield, Cisco stock offers an inexpensive valuation, hefty returned income, and a forefront position in the Internet of Things.