Most value investors aim to buy stocks that are temporarily trading at depressed prices with the hope of selling them at a higher price later. This investing philosophy can work out great if the company can turn its fortune around, but it can turn into a disaster if the underlying business model of the company is broken.

To help you identify a few potential bargains, I ran a screen to find any company that's fallen by more than 25% year to date and has a trailing P/E ratio under 10. This screen identified three companies -- Gilead Sciences (NASDAQ:GILD), First Solar (NASDAQ:FSLR), and Endo International (NASDAQ:ENDP) -- that could all be potential bargains at the moment.  Let's take a closer look at each of them to see if they might be worth buying.

Shares of the biotech giant have fallen by more than 28% since the start of the year over fears that the company's growth days are over. The decline has pulled the company's trailing and forward P/E ratio under 7, which is a dirt-cheap valuation.

Why do the markets believe that Gilead is no longer a growth company? The answer can be found in waning hepatitis C drug sales. A few years back, hepatitis C cures Sovaldi and Harvoni burst onto the scenes with great fanfare, driving incredible revenue and profit growth. However, recent competitive launches have forced Gilead to issue big discounts on its drugs to maintain market share. As a result, revenue and profits have headed in reverse this year, and market watchers expect the declines to continue into 2017.

On the plus side, Gilead continues to churn out copious amounts of cash flow, which it has used to knock down its share count and pay out a solid dividend. In addition, the company's HIV product portfolio continues to grow thanks to new product launches such as Descovy, Odefsey, and Genvoya.

Several developments have combined to put the hurt on solar stocks in 2016. Panel prices have declined, demand remains tepid, and low energy prices have made the conversion to solar less appealing, causing traders to virtually abandon the solar industry. 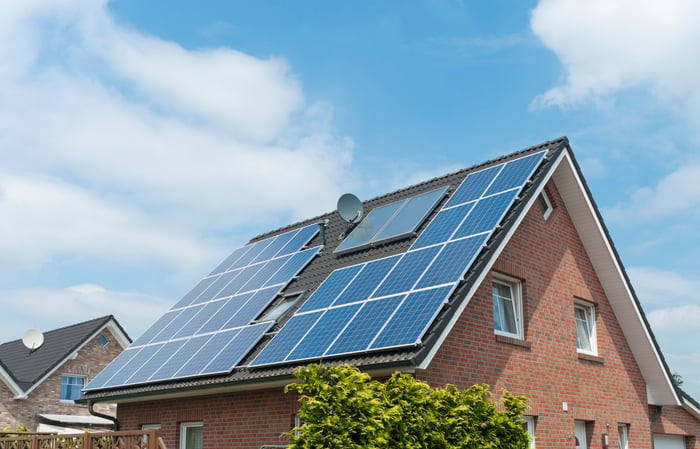 Industry giant First Solar hasn't been able to sidestep the carnage. Traders have walloped the company's shares this year, which are currently down more than 49% since January. That's pulled First Solar's trailing PE ratio all the way down to 6.

Before you start salivating over the company's discounted share price, you should know that First Solar made the bold decision earlier this year to invest heavily in its next-generation panel in an effort to stay one step ahead of the competition. While the move could pay off handsomely down the road, the investments are expected to crush the company's profitability in 2017. Profits are expected to fall by 90% next year, which has the effect of pushing the company's forward P/E ratio all the way up to 60. That could hint that shares are not as cheap as they may otherwise appear.

It's been an absolutely horrific year to be an investor in Endo International, a manufacturer of generic drugs. Shares have collapsed, falling by 74% since the start of the year. That has dropped its trailing P/E ratio to below 7. Even more unbelievably, shares are trading for just over 3 times forward earnings.

Why did shares plunge this year? You can blame the drop on a never-ending stream of negative headlines.

Here are a few of the lowlights from the year:

Add it all up, and it is no wonder shares have been decimated this year.

Worse yet, what lies ahead for Endo is still largely unknown. It is possible that the DOJ probe could lead to fines and an industrywide change in generic-drug pricing practices. Those factors threaten to throw Endo's business model into a tailspin.

While all three of these companies are facing serious challenges right now, I can't help feeling that there is one still worth buying: Gilead Sciences. Yes, its business is in transition, and there's no telling how much farther hep-C sales could fall. However, the company remains extremely profitable, and it has an interesting pipeline that could help to reignite growth in the years ahead.

Those factors easily make it my favorite stock of the group, so if you're looking for a beaten-up cheap stock that could be a bargain, I'd suggest you give Gilead a closer look.