Despite their climbing dividends, these stocks aren't the best places to put your money to work.

When it comes to dividends, longevity is typically an investor's best friend. And few businesses have done a more admirable job to that end than the group affectionately dubbed "dividend aristocrats" -- that is, the companies in the S&P 500 that have increased their respective dividends for at least 25 consecutive years.

But that doesn't mean investors should blindly purchase shares of these companies. To the contrary, we asked three Motley Fool contributors for names of dividend aristocrats they absolutely refuse to buy. Read on to see why they named Cintas (CTAS -0.84%), Wal-Mart Stores (WMT 0.80%), and Archer Daniels Midland (ADM 0.90%): 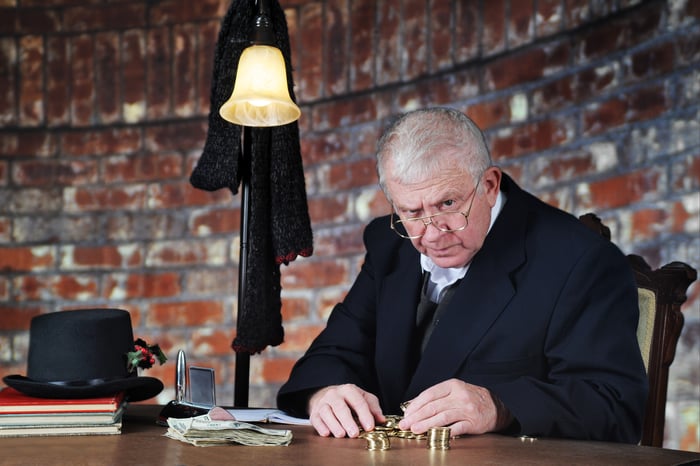 A dividend stock with low dividends

Dan Caplinger (Cintas): One reason investors choose Dividend Aristocrats for their portfolios is because they believe they are the best dividend stocks for generating both current income and future potential growth. However, many investors don't realize that there's no minimum dividend yield to be a Dividend Aristocrat, and Cintas is one example of a member of the prestigious list that just doesn't pass my test for sufficient income.

Cintas pays dividends annually rather than quarterly, and despite a long track record of 34 straight years of increases in that payout, the uniform rental and business services specialist has never been what I would call generous with its dividends. It took a serious decline during the financial crisis to send the stock's yield above the 2% mark, and throughout much of its history, dividend yields like the current 1.1% have been typical.

There's no question that Cintas has grown dramatically. That has made it a strong-performing stock, and if those favorable conditions continue, Cintas will likely keep doing well. For growth investors, therefore, the company is worth a closer look. However, for income investors, the stinginess Cintas has shown in its dividend policy makes it a Dividend Aristocrat that, in my view, doesn't pay enough income to those who need it.

Steve Symington (Wal-Mart): Wal-Mart has increased its payout every year since it first declared a $0.05-per-share annual dividend in 1974 -- something that shouldn't come as a surprise to anyone who has watched the retail juggernaut disrupt and dominate its industry for decades.

It's also no mystery that Wal-Mart's brick-and-mortar business is being threatened by the rise of e-commerce. As a result, the company is making strategic investments in bolstering online sales, including shelling out $3.3 billion to acquire Jet.com earlier this year. And those investments appeared to show promise in Wal-Mart's most recent quarter; e-commerce sales and gross merchandise volume climbed 20.6% and 16.8%, respectively, marking an improvement from the 7% year-over-year growth it demonstrated in the first quarter of this year.

But one quarter doesn't make a sustained trend. And Wal-Mart has much more work to do as it plays catch-up with online competitors like Amazon.com (AMZN -1.24%), whose product sales were already roughly six times that of Wal-Mart's e-commerce platform last fiscal year. And Amazon in particular shows no signs of slowing its pace; net product sales last quarter grew an impressive 21% year over year, to $22.3 billion, even from its significantly larger base.

That's not to say Wal-Mart can't make more progress. But I would much rather put my money to work in a business that's not hindered by its massive brick-and-mortar presence as today's consumers predictably shift their shopping habits online.

As a processor and seller of agricultural commodities, ADM's earnings are tied closely to crop prices, which tend to be unpredictable and volatile. ADM's net income shrank almost 25% during the first nine months of the year. Moreover, the company operates on thin margins since it has little control over crop prices, and its core operations are capital-intensive. ADM's operating margin has remained under 5% in the past decade, and it's just about 2% for the trailing 12 months.

The market, though, has reacted positively despite ADM's tepid operational performance, pushing the stock up almost 25% this year. Part of it might have to do with the optimism around ADM's ethanol business backed by a favorable mandate on fuel blending. However, the U.S. Energy Information Administration expects ethanol production to continue to exceed consumption in 2017, which could cap ADM's profits.

Given the challenges in ADM's business and the stock's current valuation, I'm not too sure if it's a good idea to buy now. 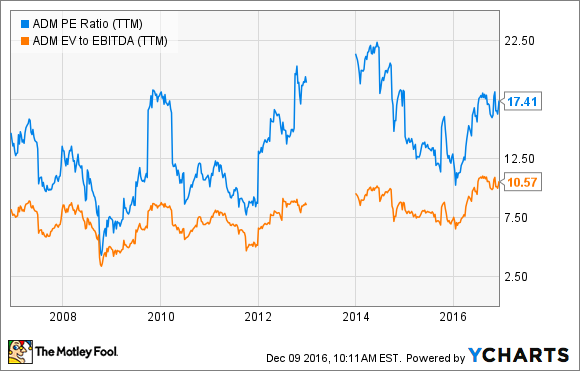 That looks pricey, and ADM's dividend yield of 2.6% isn't too attractive, either. Furthermore, ADM raised its dividend by a modest 7% last year after increasing it by 17% in 2014, suggesting increased pressure on profits. Of course, ADM deserves credit to have made it onto the Dividend Aristocrat list despite operating in a volatile business, but for now, you can find better dividend stocks out there in terms of both yield and growth potential.