With interest rates still near historic lows, investors could easily be excused for an increasing focus on yield. However, a large dividend yield isn't the only metric you should be looking at. That's why Chevron (NYSE:CVX), Helmerich & Payne Inc. (NYSE:HP), and Emerson Electric (NYSE:EMR), and their multi-decade streaks of annual dividend increases, are worth an extra look right now.

Is that a silver lining?

Of this trio, integrated energy giant Chevron is the company with the worst record of annual dividend increases. With the streak at 29 years, however, it's still a pretty good showing. What's most interesting is that the dividend was upped to $1.08 per quarter in the third quarter after 10 quarters stuck at $1.07, a measly increase of just under 1% for this roughly 3.7% yielder.

But don't get caught up on the size of the increase. What's more important is management's commitment to keeping the annual streak alive. By increasing in the middle of the year, Chevron buys itself time before it has to increase again to maintain the annual streak. It took advantage of that this time around because of the deep decline in oil prices that has pressured the company's business.

In fact, the third quarter's bottom line was in the black after three consecutive quarters in the red, which hints at just how tough the energy sector has been. To be fair, a big part of the earnings hit came from asset write downs driven by low oil prices. But the positive third quarter earnings, and notable lack of additional write downs, also suggest that Chevron is finally getting to a point where it can better deal with the current market environment.

Still, Chevron is hardly out the woods. It has taken on debt (total debt is still a reasonable 24% or so of the capital structure) to finance its dividend, capital spending, and the cost of running its day-to-day business, because cash flow from operations isn't enough to do all three. So you'll need to watch the cash flow statement and balance sheet. But with a solid yield and an obvious commitment to paying a growing dividend, it might be worth a deeper dive. 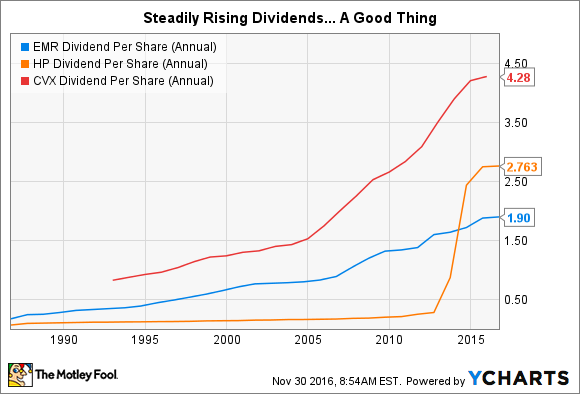 Another oil-related company that's really taken some hits lately is Helmerich & Payne. This company makes and leases out the giant machines used in the oil and gas drilling process. The swift fall in oil prices that started in mid-2014 left it with a lot of idle equipment. For example, the company's rig utilization in fiscal 2016 was around 30%, less than half the level of 2015. And the fiscal fourth quarter's utilization rate was even lower, at 24%.

That's clearly not good news and helps explain the roughly 50% drop on the top line and the losses it took in over the past two. But strangely enough, Helmerich & Payne upped the dividend in June to $0.70 per share per quarter. That was a big old 1.8% increase. Like Chevron, however, the size is less important than the fact that Helmerich & Payne extended its annual increase streak to 44 years. It was able to do this because, despite the business downturn, it generates a lot of free cash flow compared to earnings due to the high depreciation expenses related to the expensive drilling equipment it owns.

Like Chevron, Helmerich & Payne is still laboring under a difficult market environment. It lost money in fiscal 2016, and while it expects drilling demand to improve in the first quarter, it's a long way from a return to normal. That said, it's been working hard to trim costs and has a modern fleet of drill rigs that it believes will take market share when things start to get better in a more material way. Add in a 3.3% yield -- and the clear commitment to returning value to investors through regular dividend increases -- and there's a real reason to be interested here despite the ongoing troubles in the oil business.

Next up is Emerson Electric, a company with an incredible 60-year history of annual dividend increases. Like the other two companies, it's working through a rough patch, only in Emerson's case the slowdown is in the broader industrial space. In fact, Emerson's fiscal 2016 comparable sales were down 11%, and earnings fell 37%.

But the company also announced another annual dividend increase, upping the quarterly payment to $0.48 per share per quarter from $0.475. That's a miserly 1% increase, but it keeps the now six-decade-long streak alive. 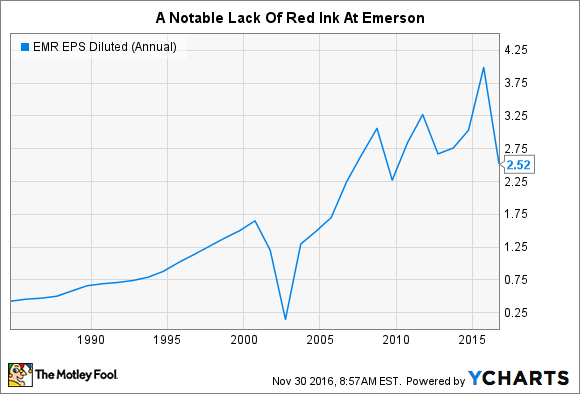 Emerson is in the middle of its own streamlining efforts, which involve cost cutting and the spinoff of a laggard division. However, even though times are tough right now, the industrial giant hasn't seen its bottom line fall into the loss column. In fact, it made $2.52 a share last year, not bad for a company working through a difficult market.

Emerson yield is roughly 3.3% and, of this trio, it has the lowest risk profile and longest commitment to rewarding investors with annual dividend increases. Times will remain tough for Emerson in the near term, but it could still be a good time to take a deeper dive.

It's not the size that counts

When investors think about dividends, they often get caught up in the size of the yield. That's one thing to look at, but certainly not the only thing. Another key factor is a company's commitment to the dividend, which a long history of annual increases proves out. Chevron, Helmerich & Payne, and Emerson have all recently extended their dividend increase streaks despite difficult market conditions, which is a good reason to step back and look at them. Add in decent, though not extraordinary, yields, and you might just find that at least one deserves a place in your portfolio.