Matthew DiLallo, Sean Williams, Dan Caplinger, Steve Symington, Timothy Green, George Budwell, and Brian Feroldi
(TMFmd19)
Author Bio
Matthew is a senior energy and materials specialist with The Motley Fool. He graduated from Liberty University with a degree in Biblical Studies and a Masters of Business Administration. You can follow him on Twitter for the latest news and analysis of the energy and materials industries: Follow @matthewdilallo

Are you looking to uncover stocks that could win big in the future? So are we. Here are seven underappreciated stocks that we've got our eye on. While each has had its share of missteps in the past, they all have the potential to go on a big run in the future if they can iron out their issues.

This underdog stock could shine once more

Trump has suggested opening up federally leased land to oil companies to drill for oil and natural gas, while at the same time crude prices are down more than 50% from where they were three years ago, reducing the urgency and impetus for utilities, businesses, and consumers to switch to alternative solar power. The result has been solar panel oversupply and weaker pricing. Recently, First Solar announced that it would lay off about 27% of its workforce and take a charge to restructure its operations to focus on its Series 6 products. The result will be a minimal adjusted profit in 2017 (at one point, more than $3 in EPS was projected by Wall Street).

Now here's the good news (and the main reason I've got a watchful eye on First Solar as a possible addition to my portfolio): First Solar's balance sheet is simply unmatched in the solar industry. The company is on track to end the year with somewhere in the neighborhood of $1.4 billion in net cash, which is light-years better than its peers, which are almost universally mired in debt. The $1.4 billion in net cash also represents about 41% of the company's current valuation, meaning Wall Street is placing quite the discount on its latest weakness and restructuring. Having such a healthy cash balance means First Solar is capable of surviving industry fluctuations, and that it can go on the offensive and acquire should it see fit to do so.

The company's long-term outlook remains bright as well. Management expects that its Series 6 production should yield 3 gigawatts (GW) of production by 2019. Its Series 6 product, which utilizes cadmium telluride thin-film technology as opposed to crystalline silicon, should greatly reduce First Solar's costs and keep it on the cutting edge of low-cost, high-efficiency production. Furthermore, GTM Research and the Solar Energy Industries Association have forecast more than 20 GW of solar photovoltaic installation by 2021, which would be a tripling in GW installation from 2015.

First Solar's latest issues are nothing but a hiccup, and this underdog stock is squarely on my radar.

Are blue skies finally ahead?

Brian Feroldi (TripAdvisor (NASDAQ:TRIP)): It has been a brutal few years to be a shareholder of TripAdvisor. Investors in the leading online review site have had to suffer through a 50% decline due to concerns that the company's growth engine in broken. The stall has turned this former high-flier into a turnaround story.

Why has the company's growth stopped? You can blame it on the rollout of the company's "instant booking" platform and the general shift toward mobile. Those factors have combined to caused TripAdvisor's revenue and profits to head in the wrong direction over the last year. 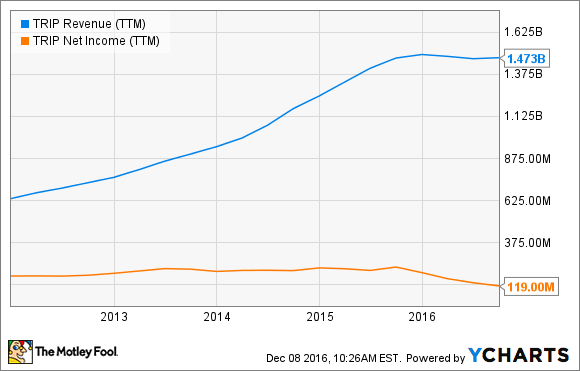 Even though it has been a trying time to be a TripAdvisor shareholder, I continue to believe that there are reasons to remain optimistic. After all, the company's site remains as popular as ever. Last quarter, TripAdvisor attracted more than 390 million unique visitors per month, which was an 11% increase over the prior year. The total number of reviews and opinions grew by an even more impressive 50%. Those figures tell me that the company remains the go-to site for researching and planning a trip.

Looking ahead, management continues to believe that the instant booking rollout will eventually drive revenue and profit growth, but it admits that it is taking longer than was originally expected. I'm a believer that the company will eventually figure things out and is worth watching closely.

Steve Symington (GoPro (NASDAQ:GPRO)): It's no surprise shares of GoPro are down nearly 50% year to date as of this writing. After exciting investors in September with the introductions of its new Karma drone and Hero 5 camera line, GoPro stock plunged last month after the company not only revealed production issues resulted in lower-than-expected launch volumes for those products, but also suggested it would have trouble keeping up with demand in the crucial holiday quarter.

To make matters worse, on Nov. 8 GoPro recalled all 2,500 Karma drones sold to date, citing a small number of Karma owners reporting incidents of power failure during operation. And because GoPro still hasn't figured out exactly what went wrong with those units, it's offering full refunds rather than replacement units, as well as a free Hero 5 Black camera to anyone affected by the Karma recall.

That said, GoPro offered a light at the end of the tunnel two weeks ago, announcing camera unit sales on Black Friday were up more than 35% year over year. And sales at GoPro.com between Thanksgiving and Cyber Monday were up around 33%, helping the Hero 5 Black to become the best-selling digital-imaging device in the U.S. so far this season.

As a result, it's still unclear exactly how GoPro will fare when all is said and done this quarter. But if GoPro manages to overcome its multiple missteps this year and deliver on its longer-term goal to return to sustained, profitable growth, I suspect GoPro stock will have little trouble following suit.

Tim Green (Bed Bath & Beyond (NASDAQ:BBBY)): Retailer Bed Bath & Beyond has grown extremely dependent on mailing out 20%-off coupons, so much so that the company is testing out a new loyalty program that offers a permanent 20% discount plus free shipping for $29 each year. The company blames widespread coupon use for its ongoing slump in profitability. Operating margin declined from 16.5% in 2011 to 10.6% in the past twelve months.

Shares of Bed Bath & Beyond have been hammered over the past two years due to these issues. Since peaking in early 2015, the stock is down nearly 40%. Competition from online retailers is a major long-term threat, and the company hopes that its new loyalty program will help it regain market share and dial back promotional activity.

Bed Bath & Beyond expects to produce between $4.50 and $5.00 of EPS this year, putting the stock price at about 10 times earnings. Heavy share buybacks have helped keep per-share numbers afloat as profitability has declined, but the company is going to need to stabilize its bottom line for the market to give the stock a higher valuation. Bed Bath & Beyond is a turnaround story to keep an eye on. If the company can return to earnings growth, the stock could be in for a major rebound.

Stay focused on the social element

Dan Caplinger (Twitter (NYSE:TWTR)): One stock that has captured a lot of attention among investors is Twitter. The social media company came into the scene in explosive fashion in its late 2013 IPO, following in the footsteps of its larger Mark Zuckerberg-run rival as it finally came back into favor following a post-IPO drop of its own. But Twitter's gains proved short-lived, and by mid-2015, the stock had dropped into a funk from which it has yet to emerge.

More recently, investors have looked at various strategies for Twitter. Some think a buyout is inevitable and hope that a potential acquirer will pay enough for the company to recover at least some of their losses. Yet any efforts that Twitter has made to put itself up for sale have thus far failed to produce a bid. Meanwhile, the fundamental business has shown some signs of life, with revenue and monthly active users ticking higher in Twitter's most recent earnings report. Gains in user counts will have to accelerate, however, if Twitter wants to keep up with rivals in the social media space.

Twitter's stock is moving largely as a result of speculation about near-term events like potential takeover bids. In the long run, though, Twitter has to show that it can carve out a viable niche in social media in order to succeed and thrive in the future. I'll be watching closely to see if it can do so.

Matt DiLallo (Halliburton (NYSE:HAL)): Energy stocks have been deeply affected by the oil market downturn over the past couple of years due to persistent oversupply resulting from OPEC's battle for market share. However, that war ended at the close of November, when OPEC agreed to change course and go back to supporting prices by cutting production. Because of that, oil company cash flows should start rising, which gives them more money to invest in replacing their declining production.

The first place they will likely allocate that capital is North American shale plays because these are low-cost, high-return opportunities that yield production much quicker than other projects. That bodes well for Halliburton, which has a leading position in most shale plays. Because of that, it should see a steady increase in work over the next year.

In fact, Halliburton's North American operations had already started improving right before OPEC stepped in to support the market. During the third quarter, for example, the company reported a 9% sequential uptick in revenue thanks to increasing drilling activities. That led the company's CEO to proclaim that "things are getting better for us and our customers." Things should only continue getting better for Halliburton as producers start putting more money to work drilling wells in North American shale plays.

This small-cap biopharma could become a top stock in 2017

George Budwell (Amarin Corp. plc (NASDAQ:AMRN)): I'm not exactly sure the Irish biopharma Amarin qualifies as an "underdog stock" right now -- but it certainly is worth watching heading into 2017. The short story is that Amarin's shares are trading at a fairly average five times its estimated 2017 revenue -- but at a fraction of the peak sales potential of its highly refined fish oil pill, Vascepa, which is indicated for patients with severely high triglyceride levels.

To unlock Vascepa's blockbuster sales potential, though, the drug first needs to show it can improve cardiovascular outcomes in an ongoing study known as REDUCE-IT. Although REDUCE-IT is scheduled to ultimately read out in 2018, a second interim efficacy and safety analysis is on track for mid-2017, providing yet another long-shot chance for an early finish.

Now, investors certainly shouldn't bank on an early stoppage for REDUCE-IT as a result of the drug's exceptional ability to reduce serious cardiovascular events. But there is a better-than-average chance that the market will start to warm up to this small-cap biopharma stock next year as this critical study matures and prepares for a full-blown data release in 2018.

Vascepa, after all, has the opportunity to become a go-to medication for a market that once sported an enormous $40 billion valuation at its peak. In other words, Vascepa would only need to capture a tiny sliver of the multibillion high-triglyceride market for it to become a bona fide franchise-level product.