In less than two weeks, Santa is coming, his sleigh packed with goodies for good girls and good boys. And just in case the jolly old man can't carry everything himself, UPS (NYSE:UPS) and FedEx (NYSE:FDX) stand ready to help.

Which of these two package delivery giants is most likely to deliver Christmas cheer to investors? Funny you should ask. Just this morning, investment banker JPMorgan (CAPS rating: 89.79) announced it is reinitiating coverage of both stocks, assigning an overweight rating to FedEx, but only a neutral to UPS.

Here are three things you need to know about the new ratings. 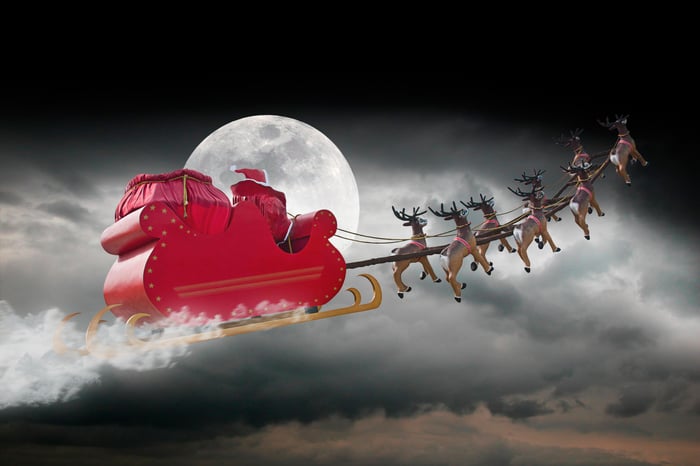 You better watch out. You better not cry. You better buy FedEx stock -- JPMorgan tells you why. Image source: Getty Images.

Choosing between the two giants of package delivery, JPMorgan leans toward FedEx as the better stock. But why?

Well, one big reason is FedEx Ground. JPMorgan likes how FedEx has been improving its network, and my Foolish colleague Adam Levine-Weinberg agrees. "FedEx Ground," says Adam, "has gained market share from UPS for a stunning 16 consecutive years," and more than doubled its annual revenue to $13 billion over the past decade. This FedEx segment also offers customers faster delivery times than UPS can manage on 30% of its routes (versus UPS beating FedEx to customers' doorsteps on only 3% of their routes).

This is a big competitive advantage, but it's not the only reason JP prefers FedEx. As explained on TheFly.com this morning, JP also believes FedEx has "greater relative leverage to an industrial recovery," than does UPS, via the former's FedEx Freight business. While not as fast a grower as FedEx Ground, S&P Global Market Intelligence data show that FedEx Freight has grown its revenue 26% over the past five years -- and increased its operating profits by 72%!

The analyst is considerably less sanguine about UPS' prospects. As JP explains, UPS' profit margins in the U.S. are coming under pressure. Though UPS grew operating profit margin in its U.S. domestic package business by 50 basis points last year (to 13.1%), improvements in U.S. margin have stalled in 2016, and grown not at all relative to 2015. Furthermore, as recently as 2012, UPS was earning a 13.8% operating profit margin in this segment -- so relative to three years ago, UPS' margin is actually down.

Is JPMorgan right in thinking FedEx is a better pick than UPS? The analyst's record suggests it might well be. According to our data here at Motley Fool CAPS, where we've been tracking the performance of JPMorgan's recommendations for more than a decade, JP has made at least three affirmative buy recommendations for FedEx stock over this period -- and beaten the market on two of them. JP has also picked UPS to outperform once (in September 2009), and gotten that pick right as well.

All this being said, there is one thing about JPMorgan's recommendation of FedEx stock that gives me pause.

According to the analyst, FedEx is its "value pick" in the package delivery industry. But when I look at these two stocks, while neither one seems particularly cheap, I struggle to see the relative value of an investment in FedEx over UPS. Consider:

Mind you, neither of these free cash flow numbers is particularly attractive. In both cases, they indicate that UPS and FedEx are far less profitable on a cash basis than they appear when valued according to GAAP's more lenient standards. But the relative valuation here seems clear: UPS may be overpriced -- but it's far less overpriced than is FedEx.

Could I be wrong about this, and JPMorgan right? Absolutely. In fact, given the analyst's strong record of outperformance in picking package delivery stocks, I'd even go so far as to say it's likely that JPMorgan is right, and I am wrong. But still, the valuation argument troubles me. Before rushing out to buy FedEx stock on JPMorgan's say-so, I'd strongly caution you to take a look at the valuation yourself -- and see if you agree.

(And while you're at it, if you're so inclined, drop by Motley Fool CAPS as well, and tell us whether you think the winner here will be FedEx, UPS, both -- or neither.)