But now it's time to worry about debt. 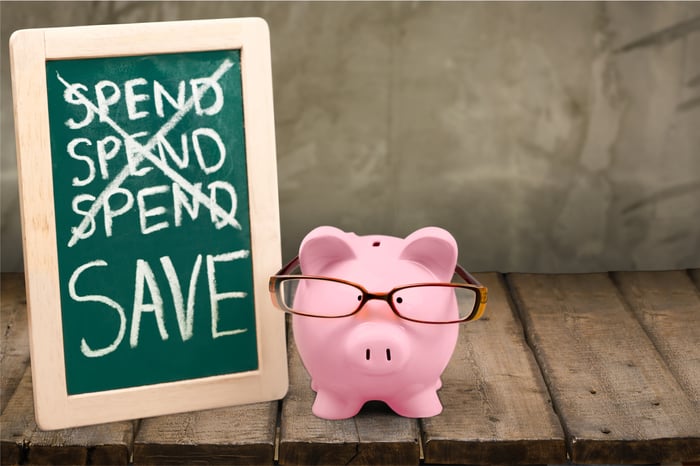 Oh yes, did I not mention that? Repurchased shares don't come cheap, especially when your share price has climbed nearly threefold in three years. In its effort to shrink its share count despite the rising cost of buying back shares, Northrop Grumman has grown its debt load significantly. Over the past two-and-a-half years, cash reserves at the company have dwindled to just $1.1 billion, while long-term debt nearly doubled to $6.4 billion.

To try to get a handle on the situation, Northrop Grumman announced last month that it will be rolling over some of its older, high-priced debt into new notes with more manageable interest rates. Specifically, the company is pricing $750 million worth of senior unsecured notes paying 3.2% interest. Some of that money will be used for "general corporate purposes." But at least $200 million worth of it will be used to replace older debt, costing the company 6.75%. The end result should be a bit more cash on Northrop's balance sheet, a bit more debt as well -- and a slightly improved interest rate on the debt.

At the same time, Northrop says it's pretty much done with buybacks. While Northrop's not averse to buying back shares when this offers the chance "to generate some value for our shareholders," the massive 2013 effort to cut the share count by 25%, says Northrop CFO Ken Bedingfield, was a "one-time deal."

What's next for Northrop?

So what does all this mean for shareholders? Improving the interest rate it pays on its debt is certainly a positive, as is raising a bit of cash to ensure financial flexibility, and terminating the debt-inducing practice of buying back high-priced shares. What worries me, though, is how investors will react now that the buyback binge has ended.

Consider: Northrop's 25% reduction in its share count might ordinarily be expected to boost the value of its remaining shares by 33% or so. (Taking a company and dividing it into fewer shares naturally implies a higher value per share.) But in fact, Northrop stock has done much better than that. From a share prince in the low $80s back when the buyback was initially announced in May 2013, Northrop's per share price has nearly tripled to $230 per share today -- a 180% gain.

What explains these supersize gains? According to data from S&P Global Market Intelligence, Northrop's revenue today -- $23.8 billion -- is actually down about 4% from the $24.7 billion collected in 2013. Thanks to improved profit margins, net earnings -- $2.1 billion -- are up 9% from the $2 billion booked in 2013. But this hardly seems sufficient to explain the much larger rise in Northrop Grumman's share price. To my mind, it was the buybacks, and the accelerated growth in earnings per share they enabled, that really drove Northrop's stock price rise these past few years.

This raises the question of what happens now that the buybacks have ceased. Buybacks enabled the company to grow earnings per share despite anemic profit margin expansion and actual revenue declines. Without the buybacks, though, earnings-per-share growth must slow. If I'm right about this, investors who bid up Northrop's stock based on its gravity-defying earnings growth may be surprised when the laws of physics kick back in.

Caveat investor. For Northrop Grumman, the next step down could be a doozy.

Out of Cash, Northrop Calls a Halt to Stock Buybacks @themotleyfool #stocks $NOC Next Article
Current