As if tech hasn't seen enough consolidation over the past couple of years, investors may see yet another blockbuster megadeal in 2017. This time around, there's a distinct possibility that Sprint (NYSE:S) could make a move for T-Mobile (NASDAQ:TMUS), after it chose not to move forward in 2014 due to regulators pre-emptively voicing opposition to the deal (Sprint never actually made an official bid).

In the wake of Donald Trump's election victory last month, shares of all four domestic wireless carriers have jumped (outperforming the S&P 500) on the hopes that lighter regulations will be good for business. Sprint is easily leading the way: 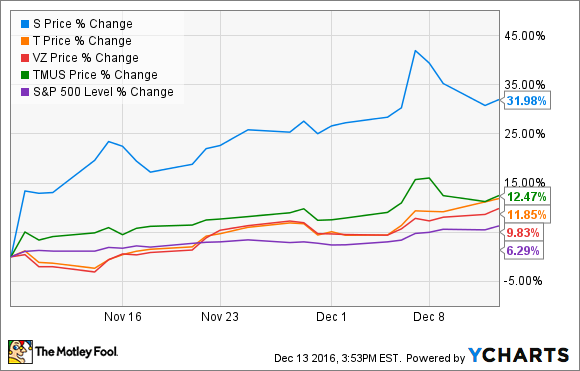 T-Mobile has already detailed several reasons why it's excited about a Trump administration, and one of the most prominent reasons is the potential for "more openness to consolidation."

Wells Fargo analyst Jennifer Fritzsche is out with a fresh research note (via FierceWireless) speculating that the Sprint/T-Mobile merger may finally come to fruition next year, and the deal's final price tag could potentially reach as high as $93.4 billion. While T-Mobile's market cap is currently around $47 billion, any potential acquirer would also need to assume the Un-carrier's $33 billion in net debt (including tower obligations). Add in a nearly 30% acquisition premium to value T-Mobile's equity at $72 per share, and you get to Fritzsche's total enterprise value estimate.

As far as how Sprint would fund such a megadeal, it would probably need to raise $60 billion in debt and equity, according to Fritzsche. Keep in mind that Sprint parent Softbank has just committed to investing a massive $50 billion in the U.S., after CEO Masayoshi Son met with the president-elect last week. Details about how that money will be invested are sparse, but it's not hard to imagine Softbank infusing Sprint with more capital in order to pursue the merger that Son has been dreaming of for years.

Whether or not such a deal materializes is an open question, and there are a lot of factors that could potentially derail it. Other analysts still doubt the possibility of the deal, despite the obvious synergies that could be realized by creating the largest domestic wireless carrier.

For instance, MoffettNathanson analysts note that if you back out handset lease accounting, Sprint is actually more expensive in terms of valuation than T-Mobile, which is hard to reconcile given T-Mobile's superior customer growth rates. Softbank itself is also highly leveraged, and ultimately it may boil down to negotiations between Softbank and Deutsche Telekom, T-Mobile's parent company. Deutsche Telekom will likely be cognizant of Sprint's lofty valuation after adjusting for handset lease accounting, which also affects Softbank's valuation, so an all-stock deal might be a tough ask, and no one has the cash on hand to fund this big of a deal.

The fact that T-Mobile is doing so well, combined with Sprint's relatively stronger financial position these days, could make it difficult to justify consolidation since there's evidence that competition is doing well. It should be intuitively obvious that if the two companies merged to create the largest carrier, there would be far less motivation to compete as aggressively as they have been in recent years.

Still, the regulatory environment will likely look more friendly under Trump, so it'll be interesting to see if Sprint tries to pull the trigger.

Thanks to Trump, Sprint and T-Mobile Could Be the Blockbuster $90 Billion Megadeal of 2017 @themotleyfool #stocks $TMUS $S Next Article
Current