No. 4 domestic wireless carrier Sprint (NYSE:S) isn't in particularly good shape right now, although that's been true for at least the better part of a decade (if not more). It seems like the company has been in turnaround mode ever since the spectacular failure that was the Sprint-Nextel merger in 2005. The Softbank deal from 2012 that recapitalized the wireless carrier was promising, bolstering the balance sheet while giving the Japanese parent company a controlling stake and some exposure to the U.S. market.

But operationally, Sprint continues to fail in terms of actually winning over customers in a meaningful way. Un-carrier T-Mobile (NASDAQ:TMUS) officially overtook Sprint last year as the No. 3 domestic wireless carrier, making good on a promise that T-Mobile CEO John Legere made in 2014. In fact, T-Mobile has only widened its lead ever since taking the No. 3 spot, while Sprint's customer base languishes. 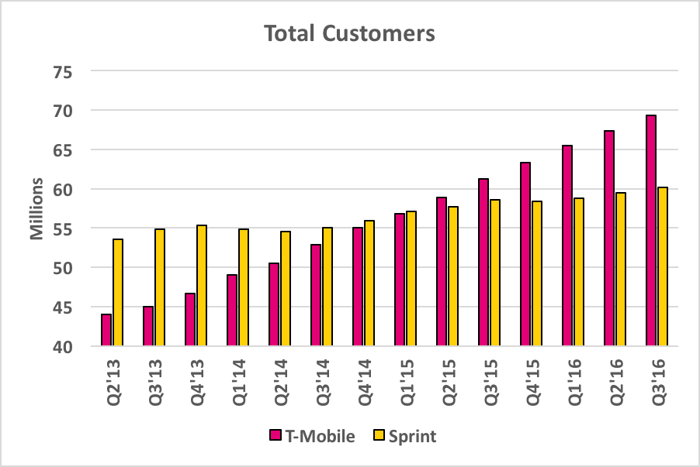 As part of Softbank's fiscal second-quarter earnings release, Chairman and CEO Masayoshi Son made it clear that the Japanese carrier needs to pull off a turnaround at Sprint. In no uncertain terms, he wants Sprint to pull off an Apple (NASDAQ:AAPL).

"The most dramatic large-scale turnaround in the U.S. history"

While I'm admittedly a little biased in the Apple department, I think most corporate and business historians would objectively grant that title to Apple. The Mac maker went from being 90 days away from bankruptcy to the most valuable publicly traded company of all time within the span of about 15 years. As far as turnarounds go, I don't think you can top that.

Son's comments come as Sprint continues to weigh on Softbank's results. The Japanese magnate's original plan was to have Sprint acquire T-Mobile, believing that a combined company would be a greater competitive threat to Big Red and Ma Bell, but that didn't play out the way he had hoped. Those pesky U.S. antitrust regulators always have a way of ruining the mood. Son again:

For the past three years, Sprint has been a drag on our consolidated basis and was the biggest reason our debt increased. Originally Sprint and T-Mobile, we were going to acquire both, merge them and have a company that is equal to AT&T and Verizon to have a hit on competition. That was our basic strategy. But because of the rejection by the U.S. government, our basic strategy did not work out. But as a result, we had difficulty, but we made steady effort.

The main challenge that Sprint faces is that its service is inherently commoditized, which severely limits its strategic toolbox. In a given metropolitan area where coverage and connectivity are comparable, wireless customers essentially care only about price. T-Mobile has been very innovative in the ways that it competes on price, offering a wide range of added benefits and included perks with its wireless plans, essentially adding value in different ways at existing price points.

Sprint's balance sheet is in particularly bad shape to withstand aggressive price competition. The company has an extremely heavy debt load relative to its cash flows ($36.6 billion in total long-term debt and capital lease obligations), and has resorted to effectively mortgaging spectrum as a way to raise cash. Sprint may continue to tread water for some time, but there's absolutely no way that it's about to pull off an Apple-esque turnaround for the history books.