Welcome to the land of opportunity.

There you have it, folks. Sprint Nextel (S) is getting a Japanese backer. Following speculation last week to that effect, Japan's Softbank has agreed to buy a 70% stake in the third-largest U.S. wireless carrier in a $20.1 billion deal.

Deal deets
Of that total, $8 billion will be new capital to bolster Sprint's balance sheet, with Softbank buying another $12.1 billion directly from current shareholders, valuing their shares at $7.30. That sum will effectively buy back 55% of currently outstanding shares, with the remaining 45% converting to shares of New Sprint. Investors who hang on to their shares will collectively own 30% of the newly formed company. 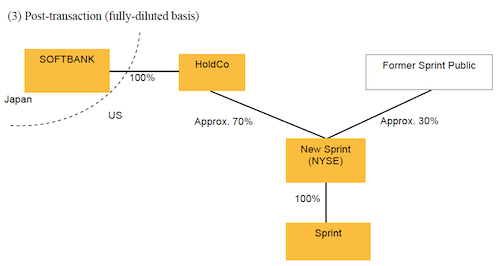 The boards of both companies have agreed, but now shareholders and regulators must sign off on the union. CEO Dan Hesse will remain at the helm of the new company. Sprint isn't required to take any further actions regarding its relationship with Clearwire (NASDAQ: CLWR) and it's not directly involved in the transaction.

However, that hasn't stopped Clearwire from hitting new highs on investor hopes that Softbank is still interested in the smaller company further down the line. Softbank CEO Masayoshi Son fueled speculation by simply saying, "Anything can happen," when asked about future deals regarding either Clearwire or MetroPCS (TMUS 0.13%).

Beefing up the balance sheet
That $8 billion will prove critical at a time when Sprint is relatively cash-strapped compared to its larger rivals, AT&T (T 0.94%) and Verizon (VZ 0.88%). Sprint is behind in its deployment of 4G LTE after it bet on the wrong horse with WiMAX (that technology lost out). Network upgrades cost billions of dollars, so that $8 billion will be put to good use.

Hesse said the new company will have a much stronger balance sheet and its new debt-to-equity ratio should be on par with Ma Bell and Big Red. Here's how the three currently compare in financial health metrics.

Softbank has more experience in LTE deployment that will help Sprint with its own LTE network build-out. It also propels Softbank to one of the world's largest mobile Internet companies when looking at its combined subscriber base.

The land of opportunity
This deal would mean that of the four largest U.S. wireless carriers, only one would not have any foreign ownership: AT&T. Verizon Wireless is a joint venture between Verizon and Vodafone, where Vodafone owns a 45% stake. Deutsche Telekom, a German company, owns T-Mobile while the reverse merger structuring of that deal will potentially give Deutsche Telekom a public exit if it so chooses. Now Japanese Softbank will have majority ownership of New Sprint.

The U.S. market for Internet subscribers is particularly appealing because... well, frankly, because we're suckers and we have less choice. Due to oligopolies and reduced competition, Americans pay far more for Internet, mobile or otherwise, than the rest of the world. At home, where we pay for speed, Americans pay more for slower connections. For example, a consumer in Seoul, South Korea can get a 100 Mbps connection for $23, a speed that would cost over $100 stateside .

On the mobile front, where usage is typically metered, we may pay around $7.50 per gigabyte downloaded over Verizon's LTE network, compared to the European average of $2.50. In areas like Sweden, that figure goes as low as $0.63 per gig.

Talk about the land of opportunity -- for wireless carriers and Internet service providers.

Hip, hip, hooray!
There had been talk of Sprint considering a counterbid for MetroPCS, which now seems more remote. Hesse had recently predicted consolidation among carriers, which is panning out as he expected. Meanwhile, Leap Wireless and its Cricket brand have been sitting on the sidelines without much attention.

Ultimately, this is a big win for Sprint, as it will now have more ammunition to duke it out with AT&T and Verizon at a time when it needs it most. The deal will help it regain its footing as it plays network catch-up. Eventually, Sprint may need to transition away from its unlimited plans if it hopes to capitalize on rising mobile data usage, but for now its unlimited data plans remain intact.

We'll have to wait and see how Softbank wants to play that card, especially if it hopes to maximize the return on its new investment.