The social media revolution has come fast and furious, and the industry has brought together billions of people across the world. Twitter (NYSE:TWTR) has been one of the most-followed social media companies in the industry, with its 140-character microblogging service spurring a whole new way to communicate and capturing the imagination of the world. Investors had hoped that Twitter stock would bring them the same kind of investing success that some of its social media peers have given their shareholders, but so far, that hasn't come to pass.

Below, we'll look at how Twitter's stock has performed and whether the future might look brighter for the company. 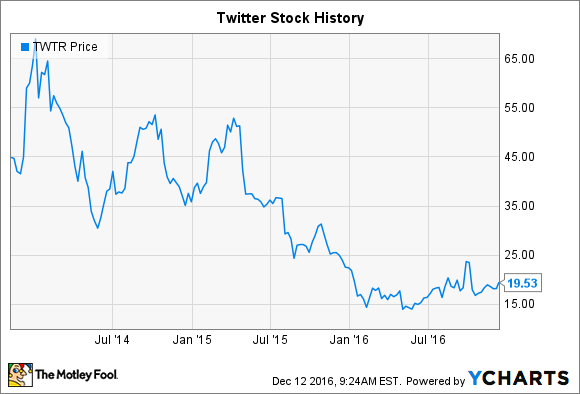 One thing to remember about Twitter is that its stock history began before its shares went public. Because of the publicity that the social media space got early in its history, investors paid close attention to the prices that Twitter shares fetched in various rounds of private funding before its 2013 IPO. Somewhat predictably, excitement built in anticipation of an initial public offering, and Twitter's share price looked poised to launch higher as its IPO date approached.

By many measures, Twitter's IPO was a huge success. After selling 70 million shares, or about 10% of the company, at $26 per share in the initial public offering, demand for the stock in the open market was extremely strong. The stock closed on its first day of trading at about $45 per share. That sort of IPO-day jump isn't unheard of, but it did signal the appetite that investors had for social media stocks with promising futures ahead of them.

Twitter stock flared out fairly quickly after its initial IPO-led push higher. After climbing above $65 per share, the stock started falling, losing half its value by the end of 2014. Investors were nervous about Twitter's growth trajectory, which seemed to slow precipitously in the quarters following its going public. Rather than following the path of its larger social media rival and pushing toward the 1 billion user mark, Twitter saw user counts start to stagnate. After having doubled in just a year and a half between mid-2011 and early 2013, user counts rose by just 25% in the following year, and in two and a half years since then, Twitter's metrics have climbed by only another quarter to 317 million in its most recent report.

Meanwhile, Twitter also went through some upheavals in its leadership. In mid-2015, then-CEO Dick Costolo stepped down from his role as chief executive amid criticism from investors about his strategic vision for the microblogging site. Co-founder Jack Dorsey decided to retake the reins as Twitter CEO later that year, but some were nervous about the fact that he chose to stay CEO of electronic payments upstart Square (NYSE:SQ) as well. Dorsey continues to serve in both roles, which draws mixed reactions from those following the stock. By the end of 2015, Twitter had fallen below its initial public offering price, and shares dropped briefly below the $15 per share mark before recovering slightly.

Over the past year, much of the attention Twitter has gotten has come from value investors thinking that the social media company might be ripe for a takeover. Indeed, throughout much of the late summer and early fall months, Twitter seemed to be putting itself up for sale. Speculation about possible buyers swirled around Twitter, attracting buying interest from short-term traders hoping to make quick money from a possible acquisition premium.

After a while, though, it became clear that Twitter wasn't going to get any quick buyout offers. Some pointed to the service's reputation for enabling hate speech as a reason for reluctance among possible buyers, while others simply noted that even after the stock's big plunge, Twitter's valuation was still fairly rich by some measures. Whatever the reason, shares haven't recovered, and Twitter's future remains in doubt.

Perhaps the best news for Twitter came from the presidential election, where President-elect Donald Trump has already adopted the microblogging service as a primary way to disseminate news. If Twitter can somehow capture that energy and harness it for its own gain, then it might be able to bounce back from its recent malaise.

For now, though, investors remain skeptical about Twitter. With the company having trouble retaining its executive team and many questioning its underlying fundamental business model, Twitter faces a critical situation right now. If it can't reignite user count growth and become more profitable, then Twitter stock might never rise again after its rise and fall over the past three years.