Fiat Chrysler Automobiles (NYSE:FCAU) plans to unveil a fully electric vehicle based on the Chrysler Pacifica minivan at the Consumer Electronics Show (CES) in Las Vegas next month, according to a Bloomberg report.

FCA is also working on a battery-electric Maserati sports car that will aim to compete with the premium electrics from Tesla Motors (NASDAQ:TSLA), the report said.

The stylish Chrysler Pacifica Minivan is already available as a plug-in hybrid. Is a fully electric version the next step? Image source: Fiat Chrysler Automobiles.

What do we know about the new electric Pacifica?

We don't know much. Officially, FCA hasn't said anything at all, and the Bloomberg report, which cited unnamed "people familiar with the plans," was short on details.

But we can draw some conclusions from the fact that it will reportedly be based on the Pacifica, rather than on a small car or crossover. For starters, it seems likely that the choice of the Pacifica, and the decision to unveil the new electric at CES, are signals that this new electric model will be more than a so-called "compliance car."

Battery-electric vehicles that were developed from models originally designed for internal combustion, like Ford's Focus Electric and FCA's own Fiat 500e, are often (and somewhat derisively) referred to as "compliance cars."

Vehicles like these tend to have ranges of around 100 miles (or less) compromises in their packaging (batteries filling much of the former trunk, for instance), and high prices. Enthusiasts argue that they seem less about drawing eager customers and more about satisfying a regulatory requirement as cheaply as possible.

Why should we think the electric Pacifica will be more than that?

Well, first of all, FCA already has a compliance car, the aforementioned Fiat 500e. It doesn't need another.

But there are other reasons why FCA might have chosen the Pacifica as the basis for its first longer-range EV. The Pacifica is a new design that is already available in a plug-in hybrid version. That plug-in Pacifica is a technologically advanced vehicle -- enough so that it was chosen as a test platform for Alphabet's Google Self-Driving Car Project.

But more to the point, the plug-in hybrid drivetrain was part of the Pacifica's engineering from the start, not tacked on later. As you can see from the cutaway illustration below, the hybrid battery pack is below the van's floor. It doesn't take too much imagination to visualize a larger battery pack in the same general location, especially if the gasoline engine is replaced by a much smaller electric motor. 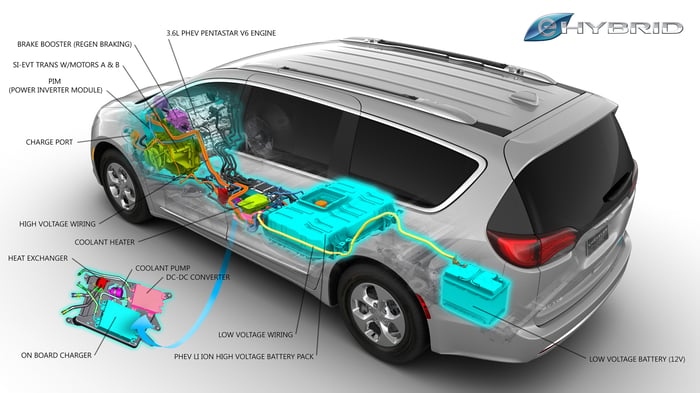 It's very possible that the Pacifica was engineered from the start with the possibility of a larger battery pack in mind, one that would give an electric Pacifica a range of 200 miles or so.

An electric minivan with good range and a mass-market price would be an intriguing product. Fold in the Pacifica's unusually (for a minivan) stylish good looks, and it could catch on as an affordable alternative to Tesla's Model X for green-minded families that need a big kid-hauler.

What about that electric Maserati?

Back in 2014, FCA's Maserati brand showed a prototype of a sleek high-performance coupe called the Alfieri. A production version is expected to arrive around 2019, and there have been strong hints from the company that an all-electric Alfieri will follow about a year later.

A production version of 2014's Maserati Alfieri concept car is expected to arrive in 2019. An electric version could arrive a year or so later. Image source: Fiat Chrysler Automobiles.

As with everything having to do with FCA, particularly when it comes to the Alfa Romeo and Maserati brands, it's very possible that schedules will slip and products will be delayed or changed. But the industry rumor mill strongly suggests that the company's current plan is to deliver an electric coupe that will probably look very similar to the show car pictured above.

What would this mean for Fiat Chrysler?

It's a big shift for FCA. CEO Sergio Marchionne has said repeatedly that he thinks it will be years before battery costs fall to the point where electric cars make business sense.

But despite that concern, he said in June that he wanted FCA to experiment more with electric drivetrains. He has recently pushed FCA to more aggressively embrace other advancing technologies, including partnerships with potentially disruptive Silicon Valley giants.

In addition to partnering with Google on self-driving, FCA is also working with Amazon.com on a pilot program to sell cars directly to customers online. It's possible that we will learn in January that FCA has found one or more partners to help speed its electric-car development as well.

What's next for FCA's electric-vehicle effort?

Again, it's hard to say until we have a better idea of what the company is planning. We should know much more after FCA makes its presentation at CES on Jan. 3.