Please ensure Javascript is enabled for purposes of website accessibility
Log In Help Join The Motley Fool
Free Article Join Over 1 Million Premium Members And Get More In-Depth Stock Guidance and Research
By Neha Chamaria - Updated Dec 14, 2016 at 7:10AM

Not many expected PotashCorp (POT) stock to end 2016 in green, but it looks poised to do just that, having gained almost 12% in just the past month after a mute performance for the better part of the year. Counting in dividends, PotashCorp investors are now sitting on 20% total returns this year compared to Mosaic (MOS 0.99%), which has earned its investors 14% in total returns so far.

Is PotashCorp stock headed for a strong 2017? The answer lies in what PotashCorp's CEO Jochen Tilk had to say about four key areas during the company's recent earnings call.

The turmoil in potash markets sent PotashCorp's and Mosaic's net profits tumbling almost 68% and 57%, respectively, in the past three years. Tilk, however, is optimistic about 2017:

Looking forward, we see a more constructive potash environment as we approach 2017. As outlined last quarter, a rebound in demand is the norm following a year of later-than-normal contract settlements and delayed purchasing.

Potash prices plummeted to decade lows this year after key potash-consuming nations, China and India, delayed contracts by several months. Now that both countries have signed contracts, Tilk expects demand to shift into next year, which should support prices. However, prices may not recover much if China and India again delay contracts in 2017. Moreover, prices are still way off previous highs, as evidenced below. 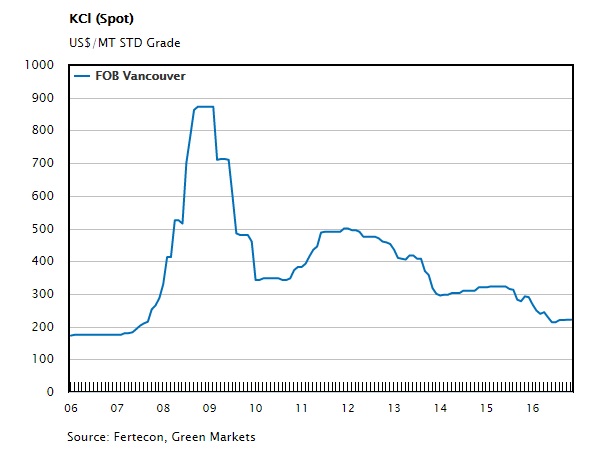 My concern is that even if potash prices firm up in 2017, weak nitrogen markets could offset much of the gains for PotashCorp.

Not many know that nitrogen is an integral part of PotashCorp's portfolio, having contributed almost 31% to its total gross profit in 2015. In fact, nitrogen was the biggest dampener for PotashCorp in the third quarter, and it was also responsible for the company's full-year earnings downgrade. 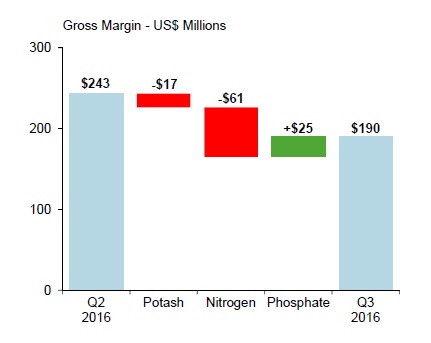 When asked about his outlook for 2017, here's what Tilk said:

So when we look at 2017 we see modest improvement for a number of reasons, one obviously being market conditions and demand; strong farm economics that support that. However, given the supply situation it's clearly not going to be an easy year.

In other words, oversupply could put a lid on nitrogen prices. North America's largest nitrogen producer, CF Industries (CF 1.01%), doesn't expect prices to recover before 2018. Worse yet, CF projects lower corn acreage next year, which could dent demand for nitrogen -- a key nutrient for corn -- further. None of it bodes well for PotashCorp.

Ramping up of its Rocanville potash plant, which is also the world's largest potash facility with nameplate capacity of six million tonnes, counts among PotashCorp's key cost-cutting moves. Tilk highlighted how important Rocanville is during the call:

Operationally, once Rocanville comes online, we will continue to align our capability with expected market conditions as we believe it creates the greatest long-term value for our shareholders.

Rocanville's significance lies in the fact that at full capacity, it can produce potash at costs as low as $45-$50 per tonne. For perspective, PotashCorp incurred $106 in costs per tonne of manufactured potash last quarter.

Needless to say, Rocanville could be a game-changer. If the plant hits full capacity next year, as projected, PotashCorp's margins could get a much-needed boost amid depressed nutrient prices.

On its merger with Agrium

The biggest highlight for PotashCorp investors this year was the company's announcement to merge with Agrium Inc. (NYSE: AGU). Tilk expects to unlock substantial value from the deal, once its completed:

Our board and management team look forward to the opportunity to deliver tremendous value for our shareholders through this transaction, including the up to $500 million in annual operating synergies that we have identified.

While Agrium's retail arm should reduce PotashCorp's exposure to the volatile fertilizers markets, the real financial benefits, or "operating synergies" as the companies call it, will only be known after the merger, which is awaiting regulatory approval.

All said, investors may want to keep PotashCorp on their radar, as 2017 will likely be an important year thanks to Rocanville and the merger.

Neha Chamaria has no position in any stocks mentioned. The Motley Fool has no position in any of the stocks mentioned. Try any of our Foolish newsletter services free for 30 days. We Fools may not all hold the same opinions, but we all believe that considering a diverse range of insights makes us better investors. The Motley Fool has a disclosure policy.