Seadrill Ltd. (NYSE:SDRL) has been on a tear over the past month as oil prices have risen and investors hope a recovery in offshore drilling is around the corner. The move is very speculative right now because we haven't seen an increase in contract signings, but it's positive nonetheless.

And as the stock recovers, it's worth looking back on the best moves the company made in 2016 to get to this point. 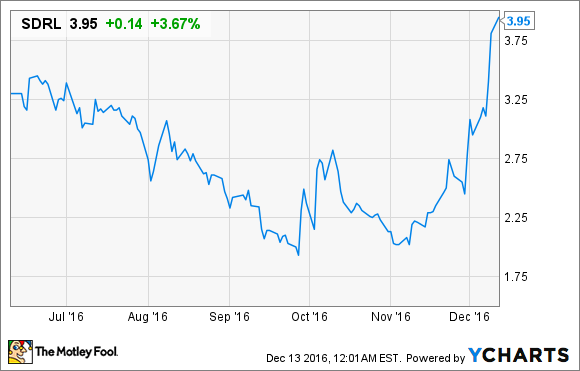 At the end of 2015, Seadrill had $10.98 billion in total interest-bearing debt and $9.94 billion in net debt. By the end of the third quarter, total interest-bearing debt was down to $10.20 billion and net debt had fallen to $8.95 billion. One big move that helped the balance sheet was the $195 million sale of the company's SapuraKencana Petroleum stake early in the year and other smaller debt-reduction deals like converting $50 million in debt to equity over the summer. But it's always good to see debt in decline, particularly during a rough stretch like this one.

Management also negotiated an extension on the West Eminence credit facility to April 30, 2017, giving a few more months to negotiate a larger financing package with lenders. The extension may have come at an opportune time as oil prices have been on the rise over the past month.

Debt has been a huge challenge for Seadrill, and with nearly $9 billion in net debt still on the balance sheet, it will continue to be a problem. But a big positive in 2016 was taking steps to reduce the debt load in hopes that better days are ahead.

When drilling contracts are hard to come by, drillers need to adjust operating expenses to stay afloat. Through the first three quarters of 2016, cash operating expenses are down 34% to $991 million, which is solid progress in cutting rig and general administrative costs.

The challenge is that there's only so much you can cut from operations. Revenue has to start coming in eventually and Seadrill has just $3.0 billion in total backlog after the third quarter, down from $5.1 billion at the end of 2015. No amount of cost-cutting will save the company if drilling contracts don't start to come in during 2017.

Offshore drilling is no safe bet

Offshore drilling rig owners like Seadrill have built some breathing room financially, but the company is still in a very difficult position. Demand for rigs is low, particularly in the deepwater market, and may not return unless oil prices rise and stay well above $50 for an extended period of time. There's increased hope that'll happen, but when is a big question facing investors. If it doesn't happen soon, all the debt reduction and cost cuts Seadrill makes won't be enough.