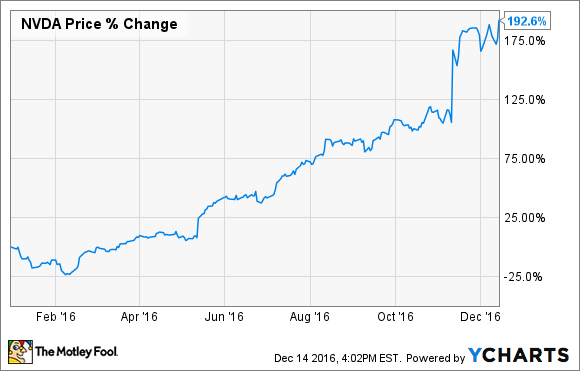 Few stocks have had this good of a year. With just a couple weeks left in 2016, NVIDIA (NASDAQ:NVDA) shares have nearly tripled year to date, soaring another 6% today to tap all-time highs. That's great news for investors who own shares, but what about those of us on the sidelines? Does the graphics specialist have more room to run? Or should prospective investors tread carefully, as great expectations are now priced in?

For starters, let's acknowledge why NVIDIA has been having such a blockbuster year. Simply put, the company is absolutely firing on all cylinders, including its core GPU business as well as numerous initiatives that it has been investing in over the years, particularly automotive and data centers. NVIDIA's Tegra business had been floundering for a while, but its recent recovery has been nothing short of stunning as NVIDIA has been able to successfully pivot the mobile processor to other applications and markets -- namely, automotive. 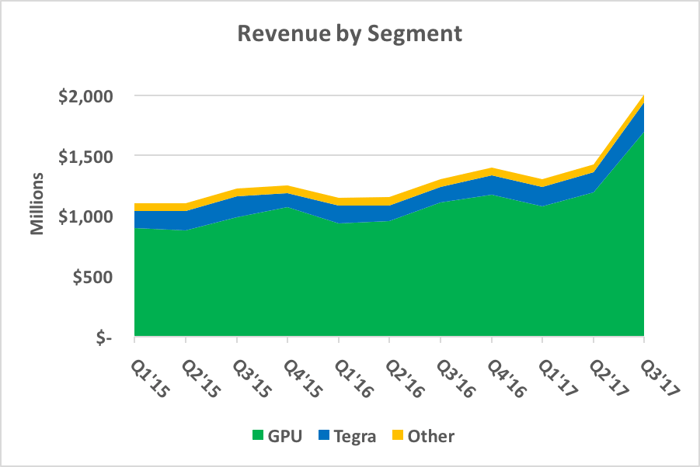 NVIDIA is now a $49 billion company by market cap. But shares are now expensive. As strong as NVIDIA's numbers have been this year, the meteoric rise has outpaced the underlying growth in financial performance, leading to meaningful multiple expansion by just about any valuation metric you want to look at. At current levels, investors are pricing in considerable growth going forward, so the pressure will be on NVIDIA to deliver.

NVIDIA is executing on all market platforms

It's worth pointing out that NVIDIA only began breaking out sales by market platform starting this fiscal year, a disclosure that supplements the reportable GPU, Tegra, and Other segments. So there's not a whole lot of historical data to work with. That being said, NVIDIA is starting to see meaningful traction in data centers and automotive, which jumped 193% and 61% last quarter, respectively. But these are still fairly small businesses in absolute terms. Here's each market platform's revenue on a trailing-12-month basis:

There's a broader shift happening right now within the semiconductor market, though. Emphasis is moving away from consumer-oriented applications like smartphones and mobile devices and toward enterprise and industrial uses like data centers, machine learning, and the Internet of Things. Given that trend, NVIDIA's failure in the consumer mobile market a couple years back might have actually been the best thing to happen to it, as it began to pivot toward these areas pretty early on, which is why it's executing so well as we speak.

NVIDIA GPUs are particularly well-suited for artificial intelligence and machine learning, so the company has been a key beneficiary of larger tech companies' ongoing investments in the technology. Self-driving cars are also on the horizon, another critical use for machine learning that NVIDIA wants to enable. Earlier today, Evercore ISI analyst CJ Muse upgraded shares of NVIDIA to buy alongside a $120 price target, believing that data center revenue will continue growing at an approximately 50% compound annual growth rate (CAGR).

I think NVIDIA will continue executing across its market platforms, but personally I'm going to stay on the sidelines since the valuation multiples seem a little stretched right now, and any potential missteps could be severely punished.

Trading at All-Time Highs, Is it Too Late to Buy NVIDIA Stock? @themotleyfool #stocks $NVDA Next Article
Current