Please ensure Javascript is enabled for purposes of website accessibility
Log In Help Join The Motley Fool
Free Article Join Over 1 Million Premium Members And Get More In-Depth Stock Guidance and Research
By Lee Samaha - Dec 14, 2016 at 8:31AM

A look at the potential effects on the industrial blue-chip stock.

General Electric Company's (GE 0.94%) oil and gas division and Baker Hughes Incorporated's (BHI) management held an investor meeting recently to outline the rationale for their merger, which was announced back in October. As with the acquisition of Alstom's energy assets, GE management expects most of the synergies to come from cost rather than revenue. As such, it's tempting to think of the merger as creating a company set to generate earnings growth largely irrespective of the oil cycle.

Let's look at the cases for and against this argument.

Three reasons the merger will be beneficial

There are three reasons to believe the merged company will be able to grow earnings strongly even without the help of higher energy prices.

First, let's look closer at the cost synergies. The presentation outlined an expectation of a total of $1.6 billion in earnings before interest, tax, depreciation, and amortization (EBITDA) synergies in 2020, but $1.2 billion is expected from cost synergies -- the rest will come from revenue synergies. In other words, only a quarter of the expected increase in EBITDA will come from extra revenue generated through being a combined entity.

As you can see below, the cost synergies (all in blue) are mainly activities related to operational improvements coming from the combined entity. 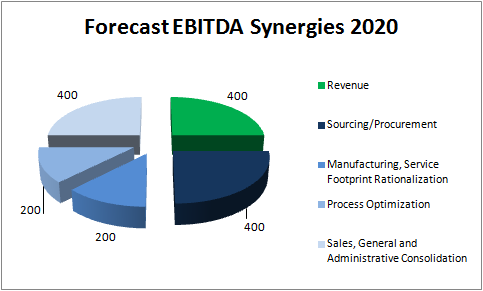 Second, a major part of the rationale for the deal is the marrying of GE's digital capability with Baker Hughes' technology in order to significantly improve oil-field services productivity. Of course, if you can improve productivity at an oil field, then you can lower the break-even price of oil that a producer needs to be profitable. You could even make the case that lower oil prices might increase interest in more productive solutions, such as those offered by General Electric Company-Baker Hughes.

Third, the value-add to customers of creating a full-stream technology provider suggests companies might be more inclined to use GE-Baker Hughes even if oil prices fall.

Before moving to the arguments against the merger, it's worth noting that GE found significantly more cost synergies with the Alstom deal than originally thought. For example, management initially expected $1.2 billion in cost synergies by 2020 at the initial announcement in 2014, only to increase the target to $3 billion in May 2015. So don't be surprised if there are more cost synergies to come with this deal, too.

While the rationale for the deal is a strong one, it doesn't mean the merged entity will be immune from oil price falls.

First, with oil process declining at the start of 2015, GE CEO Jeff Immelt talked of "60% of the [oil and gas] portfolio revenue being OK," 15% where orders will be "very tough to come by," and the remaining 25% being "hard hit."

However, this relatively rosy outlook didn't quite come true,  as oil prices, and oil and gas companies' capital spending plans, continued to fall. For example, management cut its revenue forecast for organic growth in 2016 from a range of 2%-4% to 0%-2%, largely as a result of disappointing oil and gas revenue. Moreover, the deal with Baker Hughes, while lauded as a creating a "fullstream portfolio," actually increases GE's exposure to more cyclical upstream technology.

Second, as intimated above, GE's exposure to downstream technology -- which could theoretically benefit from lower oil prices -- has not given the company any immunity. Indeed, Honeywell International -- a company with three-quarters of its oil-and-gas-focused revenue in midstream and downstream operations -- has also failed to match its own management's expectations on revenue.

In other words, the Baker Hughes deal increases upstream exposure -- an area likely to be hardest-hit in an oil price downturn -- and GE's downstream operations can't be relied on if oil prices fall.

What to make of it all?

All told, the merger won't decrease the overall cyclical exposure to oil for GE investors, but it will create earnings growth potential given stable or growing end-market conditions. You can think of the deal as General Electric's management expressing confidence in the long-term future of oil and gas capital spending -- and boosting its competitive positioning as a consequence.

Therefore, unless you have a negative view on oil-price movements in the mid- to long-term, the deal makes perfect sense and should be welcomed by investors.