Please ensure Javascript is enabled for purposes of website accessibility
Log In Help Join The Motley Fool
Free Article Join Over 1 Million Premium Members And Get More In-Depth Stock Guidance and Research
By Alex Dumortier, CFA - Dec 15, 2016 at 8:47AM

You probably haven't heard of all three of these names, but they're “Warren Buffett stocks" -- they belong to companies with sustainable competitive advantages, and they're fairly priced.

What does billionaire investor Warren Buffett look for in a stock? Two criteria are paramount (putting aside market value -- Berkshire Hathaway's size means he can only look at large-capitalization names): First, the underlying business must possess a sustainable competitive advantage, which is the only possible source of above-normal economic returns for long-term owners. Second, in order for shareholders to reap those business returns, the purchase price of their ownership interest should not exceed fair value. The following three stocks, Valvoline Inc (VVV 1.09%), Mead Johnson Nutrition Co (MJN), and Armstrong World Industries Inc (AWI -0.63%), meet both of those criteria at current prices, thereby earning the prestigious designation of "Warren Buffett stocks."

Valvoline, which manufactures and distributes lubricants, is a 2016 spin-off from specialty chemicals manufacturer Ashland Global Holdings Inc. I'm no Warren Buffett, but my value investor's antennae start tingling when I find a page-long section titled "Our Competitive Strengths" on page 3 of a company's offering prospectus (the comprehensive report a company must file with the Securities and Exchange Commission prior to its initial public offering). That's the case with Valvoline's prospectus.

When that section goes on to list strengths that include "Iconic Brand With Premium Products," "Industry-Leading Valvoline-Branded Quick Lube Business," and "Strong Financial Performance and Free Cash Flow Organization," I begin to get a warm, fuzzy feeling, and I know it's going to be worth my time to continue reading.

Ultimately, Valvoline's competitive advantage is grounded in the power of its brand (and the attributes it represents). I'm a good example of that power: An unrepentant urbanite, I haven't owned a car in more than two decades, and I have never once changed the oil on a car -- yet I have heard of Valvoline. If pressed to name another lubricant, the only other brand I can summon is Castrol GTX (the company ran a very effective series of ads when I was growing up in England branding Castrol as "liquid engineering").

As far as valuation is concerned, at roughly 16 times forward earnings, the shares look like a very attractive proposition. A superior franchise at an ordinary multiple? That's a recipe for successful investing.

At the beginning of April, Armstrong World Industries completed its spinoff of Armstrong Flooring Inc in order to focus on its ceiling products, an area in which it is the global leader, generating $1.8 billion in revenue over the 12 months through September 30.

The spinoff marks a new chapter in Armstrong's development since it emerged from bankruptcy a decade ago (the company filed for bankruptcy in December 2000 because of mounting asbestos liability claims), the rationale being that the ceilings business is superior to its flooring cousin.

The Baron Real Estate Fund took the opportunity to add Armstrong World Industries to its portfolio during the second quarter (the Fund is advised by Baron Capital Management, which is run by billionaire value investor Ron Baron). In his quarterly shareholder letter, fund manager Jeffrey Kolitch described his thesis for investing Armstrong. I can do no better than reproduce his comments here:

... Armstrong World Industries, Inc., [is] a global leader in the design and manufacture of ceiling systems. We believe its ceilings business is attractive due to its favorable industry structure and growth potential.

The ceilings systems industry in the U.S. is effectively a duopoly, with two companies commanding approximately an 83% market share. Armstrong is the clear leader with a 56% market share, and USG Corporation is a distant second, with a 27% market share. Because of this favorable industry structure with only two dominant companies possessing strong pricing power, Armstrong has been able to increase prices and mix by over 35% since 2007 despite the fact that volume growth over this time has declined by approximately 25%!

We believe the company will be able to increase prices even further as sales growth returns to pre-recession growth levels. We expect Armstrong's sales to rebound in the next few years. Ceilings sales volume remains cyclically depressed and is still approximately 25% below the 2008 peak of the commercial market. As economic growth rebounds, we expect pent-up commercial renovation and new construction activity to pick up, resulting in improved sales volumes. Due to Armstrong's dominant industry position (duopoly), its ability to increase prices, even during stagnant sales volume, and the potential for the resumption of its accelerated growth, we expect Armstrong's ceilings business to command a premium valuation over time.

The Fund's average cost on its Armstrong position is $40.41 per share. Monday's closing price of $44.00 -- just 9% higher -- is roughly 18 times forward earnings, which hardly looks exorbitant for a business with pricing power and decent growth opportunities. 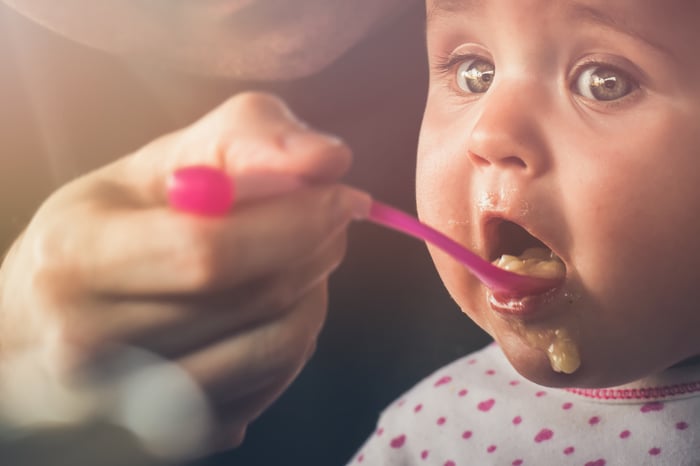 Mead Johnson Nutrition, was spun out of Bristol-Myers Squibb Co in December 2009. With $3.8 billion in revenue for the 12 months through September 30, Mead Johnson is one of the leading global companies in the infant and pediatric nutrition sector.

The source of the company's competitive advantage is a brand that has been carefully nurtured. Consider the customer's mindset: If you're happy with the infant formula you purchase for your baby, are you really going to switch to a competing product you're unfamiliar with because it's cheaper? I can't think of too many things parents would be more willing to pay up for than the nutrition and wellness of their baby.

Another element of the company's moat is the regulatory environment in which it operates -- the Food and Drug Administration sets strict guidelines for infant formula manufacturers. It's no coincidence that the industry is oligopolistic: Although there are regional and local competitors, Mead Johnson dominates the global market in concert with three other large companies: Abbott Laboratories, Danone SA, and Nestle SA.

Oligopolies spell fat profits for their participants, and Mead Johnson's numbers don't disappoint, with eye-popping returns on invested capital, averaging 39% for the five-year period from 2011 to 2015 (with very modest leverage).

At 20.6 times forward earnings, Mead Johnson's stocks commands the highest earnings multiple among these three Buffett stocks, and it may well be the one closest to its fair value (it might even be trading at fair value). For investors with a minimum three-to-five year timeframe, that's not in any way problematic: You can do just fine paying fair value for an outstanding business. Nourished on rich cash flows, this stock ought to develop into a healthy and strong core holding over time, rewarding its proud "parents" in the process.

(If you wish to learn more about Mead Johnson, you can take a look at this recent write-up by a student at the University of Iowa's business school, on behalf of a student-run investment fund.)

Three companies, three Buffett stocks, but what do these companies have in common? Two things: First, all three are the result of a spinoff, an area of the public markets value investors are particularly fond of. Second, their competitive advantages are, to one degree or another, rooted in their brands. The value of a truly great brand is difficult to overestimate -- it's an extremely powerful lever. Or as Warren Buffett himself put it: "I always understood brands, but there is nothing like owning one."

Alex Dumortier, CFA, has no position in any stocks mentioned. The Motley Fool owns shares of and recommends Berkshire Hathaway (B shares). The Motley Fool recommends Nestle. Try any of our Foolish newsletter services free for 30 days. We Fools may not all hold the same opinions, but we all believe that considering a diverse range of insights makes us better investors. The Motley Fool has a disclosure policy.