After plunging earlier this year, airline stocks have rallied dramatically in the past six months. Shares of West Coast airline Alaska Air (NYSE:ALK) have gained 55% during that period. 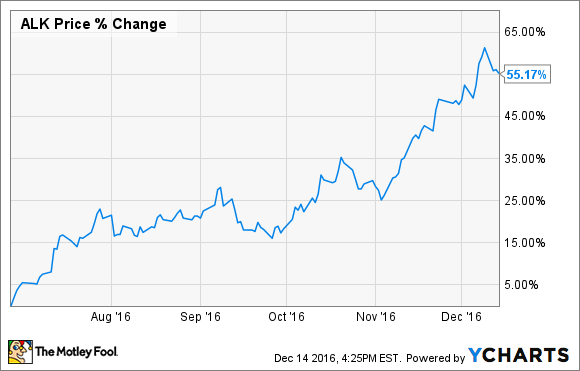 After such a ferocious rally, it would only be natural to expect airline stocks to pull back in 2017. However, Alaska Air stock could continue to shine -- because alone among the major airlines, it has a meaningful opportunity to grow its earnings next year.

Nearly every U.S. airline has reported strong earnings growth for the past two years, driven by plunging fuel prices. Some of the fuel savings have been offset by unit revenue declines, but domestic-focused airlines such as Alaska Airlines and Southwest Airlines (NYSE:LUV) have been able to avoid the worst of the fare weakness.

Unfortunately, analysts expect the airlines' winning streak to come to an end in 2017. Many airlines already started to report year-over-year earnings declines last quarter, and conditions are getting tougher because of rising labor costs and the recent rebound in oil prices.

Southwest Airlines is better positioned than most airlines to grow its earnings next year. For the past two years, it has been paying dearly for some ill-advised fuel hedging decisions. For 2016, Southwest will incur roughly $1 billion of hedging losses, driving up its "economic" fuel costs. Hedging losses will be much smaller in 2017, at least partially offsetting the increase in market fuel prices.

On the other hand, Southwest's unit revenue performance has deteriorated over the course of the year. In Q4, the company expects revenue per available seat mile (RASM) to fall 4%-5% year over year. Non-fuel unit costs will also rise, in part because of recent increases in pilot pay. As a result, analysts expect Southwest's earnings per share to be roughly flat year over year in 2017.

By contrast, Alaska Air has what it takes to deliver solid earnings growth next year. First, the company will benefit from its acquisition of Virgin America, which closed on Wednesday.

Alaska had to raise $2 billion of debt to fund the deal, and of the more than $1.5 billion raised during Q3, the weighted average interest rate was just 2.37%. Thus, financing the acquisition will cost less than $50 million annually, whereas Virgin America has generated nearly $200 million of pre-tax income over the past year. 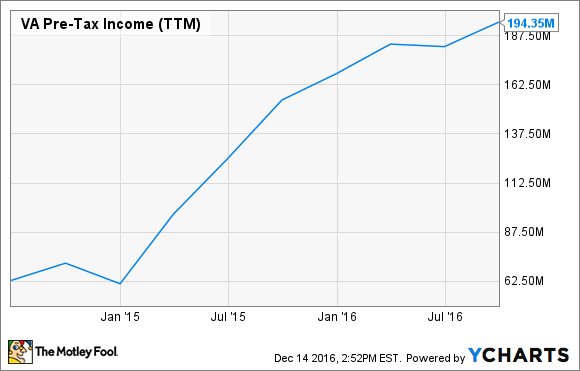 This incremental income will increase Alaska Air's earnings by more than 10%. In addition, the company forecast earlier this year that it would achieve 30% of the projected $225 million in merger synergies during 2017.

The actual total will probably be smaller, because the deal closed later than planned and there was an expected $15 million-$20 million headwind from scaling back Alaska's code-share partnership with American Airlines. Nevertheless, Alaska Air will probably capture some net synergy gains next year.

Second, the core business is gaining momentum -- and the outlook for 2017 is solid.

In the past few quarters, Alaska Air has faced double-digit competitive capacity growth in its markets as other airlines added lots of capacity in Seattle. Alaska also grew its own capacity rapidly for most of the year. As a result, RASM declined 5.6% year over year through the first nine months of 2017.

Alaska Airlines' core business is on track to have a great year in 2017. Image source: The Motley Fool.

In Q4, Alaska has slowed its own growth dramatically. This has driven a sharp improvement in its unit revenue results. RASM declined just 1.1% year over year in October and then increased 3.6% in November. This is an extremely encouraging trend.

Furthermore, competitive capacity growth is set to slow dramatically for Alaska in the next few months. This will aid the company's efforts to achieve sustained unit revenue growth. Alaska Air is also launching its new Premium Class extra-legroom offering next month, with an expected earnings benefit of $50 million in 2017.

Alaska Air will face many of the same unit cost pressures as other airlines in 2017. However, it is in a great position to offset these headwinds.

Alaska Air is likely to post industry-leading earnings growth in 2017. Indeed, it may be the only airline to grow its earnings next year, depending on when Southwest Airlines returns to unit revenue growth. That should keep Alaska Air stock moving higher.

Alaska Air Stock Has Soared 55% Since Late June: Why It Can Keep Rising @themotleyfool #stocks $ALK $LUV Next Article
Current