For Williams Companies (NYSE:WMB), 2016 was the best of times and the worst of times. While the company's cash flow continued its steady climb thanks to the completion of several growth projects at its MLP Williams Partners (NYSE: WPZ), the company faced a series of setbacks that sent its stock on a wild ride: 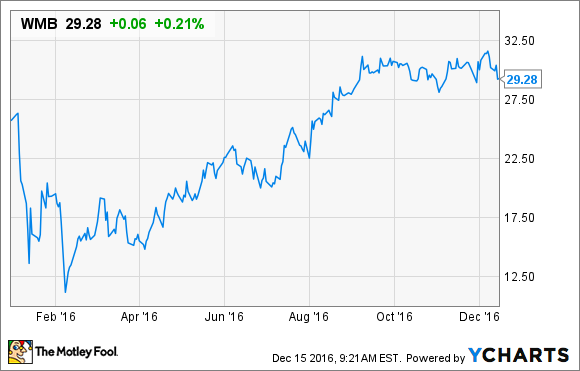 Here's a look back at some of the headlines that contributed to the company's volatility over the past year.

On April 22 (Earth Day), New York environmental regulators denied Williams Companies, and its partners Cabot Oil & Gas (NYSE:COG), Piedmont Natural Gas Company (NYSE:PNY), and WGL Holdings (NYSE:WGL), the necessary permits to construct the Constitution Pipeline. The $925 million, 124-mile project would have moved natural gas from Pennsylvania into New York City, Boston, and other regions in New England. The state rejected the pipeline because it did not comply with New York's water quality standards.

Williams and its partners have appealed the ruling and remain committed to completing the federally approved project. While they face an uphill battle to restart this long-delayed project, which was initially proposed in 2012 and expected to be in service by 2015, analysts do believe they will win out in court. However, it could be quite some time before the company starts construction, and it could face additional roadblocks and delays given the intense opposition to the project.

Williams Companies endured another significant rejection when merger partner Energy Transfer Equity (NYSE:ET) decided to walk away from their deal at the end of June. That transaction had been on the ropes all year because of concerns about the incremental debt Energy Transfer Equity would need to take on to pay Williams' shareholders for the cash portion of the cash-and-stock deal. That said, what turned out to be the deal's undoing was the stock component after Energy Transfer Equity's lawyers could not deliver the required tax opinion on the transaction.

Because of that, a judged allowed Energy Transfer Equity to terminate the merger. While Williams vowed to fight that ruling and seek damages against Energy Transfer, it has since settled on a stand-alone, go-forward strategy. This plan included cutting the dividend and reinvesting that cash into its MLP, while also reducing its direct exposure to commodity prices by selling or monetizing assets with cash-flow volatility.

In mid-October, the company endured yet another setback after the Federal Energy Regulatory Commission pushed back the date for a final environmental review of the company's Atlantic Sunrise Pipeline. The agency wanted to give landowners in Pennsylvania more time to comment on the pipeline's proposed routes before signing off on the project. Atlantic Sunrise, which Williams Partners is developing to support the market access of Cabot Oil & Gas and other shippers in the Marcellus, is a nearly 200-mile extension of its Transco system.

This delay pushes back the project's timeline by at least six months, which will likely shift its full in-service date to the middle of 2018. That's a bit of a blow to Williams' growth ambitions because this is a key growth project for the company. In fact, under its initial go-forward strategy, the planned in-service date of this project of late 2017 corresponded with Williams' belief that it could resume dividend growth by 2018. However, this delay could push back the company's ability to boost the payout as early as it initially expected.

Williams Companies endured a string of setbacks and rejections this year. However, the company has done an admirable of job dealing with each blow by quickly developing a new go-forward strategy that will reduce its risk profile in the future. Meanwhile, the company has not given up on developing new pipelines despite the recent setbacks, and it currently has 10 projects in development and is pursuing another 20 opportunities. Because of this immense growth potential, Williams believes its best days still lie ahead of it.