Please ensure Javascript is enabled for purposes of website accessibility
Log In Help Join The Motley Fool
Free Article Join Over 1 Million Premium Members And Get More In-Depth Stock Guidance and Research
By Andrew Tonner - Updated Jun 26, 2017 at 7:19AM

These three companies are working to bring artificial intelligence into our everyday lives. 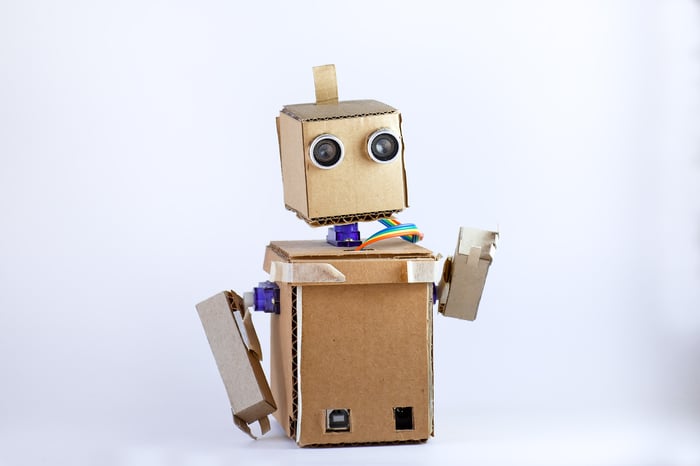 The dawn of the artificial intelligence age has finally arrived. Though some regard this transformative technology in terms of job-taking robots or the Terminator, the reality is likely to be much more benign. In fact, creating more powerful computers than ever before is far more likely to unlock a new wave of economic growth, which is great news for tech investors today.

The world's largest social network has been pushing the envelope in AI development in ways both theoretical and functional. In fact, Facebook has two separate AI departments -- one for academic research, and the other for infusing its products with AI to help grow profits. On the research side, there's Facebook AI Research, or FAIR, the academic wing of Facebook's AI efforts. Hiring heavily from academia, FAIR helps produce major breakthroughs in the field, though it's not yet clear how much of an impact Facebook's big-ticket research will have on its near- to medium-term future.

In a more day-to-day sense, Facebook has been leveraging AI for some time to help fuel its growth. Facebook's AI helps parse our connections, the text we write in each post, and more to optimize the advertisements it serves us. The company has also created an interesting business using AIs chatbots and other apps -- over 33,000  at last count -- within its multiple sprawling messaging platforms.

As with the remaining names on this list, Facebook's efforts in AI are still in their early phases, but the company has grand plans  for the technology in its future.

In most respects, Microsoft's AI efforts have yet to result in significant product innovations. Microsoft uses deep learning, neural nets, and the like to help feed and analyze data, and the results are manifesting themselves  in some of its products. For instance, Microsoft's Cortana uses AI to continually refine and improve its responses to user queries, and AI allows Skype to translate video conversations across seven popular languages. However, these efforts remain more incremental than transformational at this point.

Microsoft remains active on the research front, including its work in neural networks, and is racking up some impressive results in the process. For example, Microsoft researchers recently won an internationally recognized computer image recognition competition by creating a neural network far larger than any other that academics had previously built, solving some thorny engineering problems along the way.

Major breakthroughs will probably remain in the lab for the coming years, but the company is indeed vying for a prominent place in our AI-powered futures.

Secretive Apple doesn't get a lot of credit for its AI work, but now it's using PR to tout its own ambitions. Unlike Facebook and Microsoft, Apple has pursued a more product-centric strategy with its AI efforts. In fact, Apple uses AI to prevent fraud in the Apple Store, optimize iPhone battery life between charges, and figure out whether an Apple Watch user is exercising or doing something else, among other things.

Since Apple lives and dies by the strength of its next product, its choice to notch AI wins in a host of understated ways makes perfect sense. Rather than focus as intently on creating the next transformative breakthrough in AI -- Apple's been less than forthcoming about its own research efforts -- Apple can use its army of iDevice owners to find useful ways to keep tweaking its devices for the better, while maintaining its strict user privacy standards.

It only gets better from here

When making virtual assistants "less dumb" is touted as a major innovation, it's easy to take a cynical view of AI as tech's latest passing fad. And it's true that the products in consumers' hands probably don't fit with how the public tends to think of AI. However, as with all major technologies, the incremental changes should add up to something significant over a long enough span. Given the resources and talent the tech companies have dedicated to this sector, it seems only a matter of time before AI earns a more prominent place in our daily lives.