Neha Chamaria and Rich Duprey
(TMFNehams)
Author Bio
A Fool since 2011, Neha has a keen interest in materials, industrials, and mining sectors. Her favorite pastime: Digging into 10Qs and 10Ks to pull out important information about a company and its operations that an investor may otherwise not know. Other days, you may find her decoding the big moves in stocks that catch her eye. Check back at Fool.com for her articles, or follow her on Twitter. Follow @nehamschamaria
Follow @nehamschamaria

2016 has turned out to be a remarkable year for Alcoa Corporation (NYSE:AA), with the stock gaining a staggering 40% since it was spun off from Arconic Inc. (NYSE:HWM) in November. The new Alcoa is now a pure-play bauxite and aluminum manufacturer while Arconic has taken over the specialty parts segment that caters to the high-potential aerospace and automotive industries. The spinoff now makes Alcoa a purely commodity-centric company, which could turn risk-averse investors away. On the flip side, the recent rebound in aluminum prices makes Alcoa an interesting turnaround play. 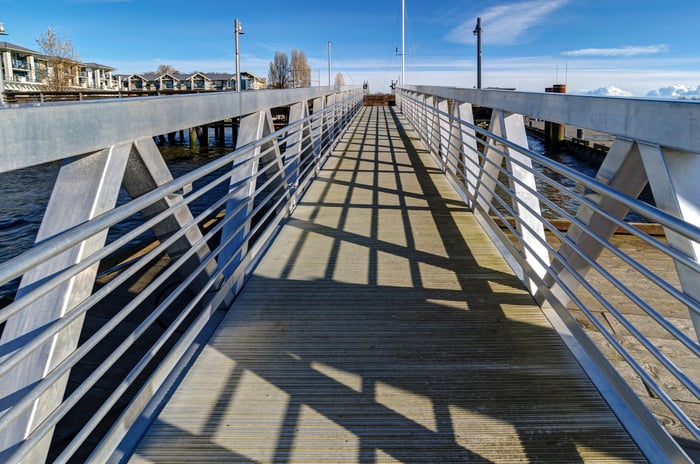 So should you buy Alcoa stock now or avoid it? Two of our Foolish contributors take sides.

Rich Duprey: Now a pure play on bauxite, alumina, and aluminum, Alcoa has gained 38% since it was spun-off from metals value-added business Arconic in October 2016. That's a lot of ground to have covered in so short of time, and it underscores why analysts are sounding cautious notes about the company. Citigroup downgraded it to neutral while Deutsche Bank rated it a sell. The prospects of industry oversupply weigh too heavily to sustain the heights it's already reached.

There is a case to be made for that. London Metals Exchange (LME)  aluminum prices are trading near 16-month highs as stocks of aluminum in LME-approved warehouses tumbled more than 60% from the record highs they hit in early 2014. But Reuters says that's a result of distortions created in the market by rule changes the LME made in 2013 that cap rents charged on metal stored for more than 30 days. At the risk of warehousing aluminum for free, the stocks are being drawn down quickly, masking the surplus of the metal. Moreover, it's possible global competitors will simply bring their idled production capabilities back on line, exacerbating an already tenuous supply situation.

Those are reasonable concerns, but China and President-elect Donald Trump may be bigger factors for a bullish case for Alcoa.

Aluminum prices, despite their increase, have largely been kept from running away too far as we've seen with coal and iron ore because of concerns about Chinese exports. Alcoa has blamed high Chinese exports for depressing prices, but November exports of unwrought aluminum were said to be sharply lower than the year before. And those higher coal prices have also served as a ceiling on supply due to its use in alumina refining. Rising energy prices are going to make life even more difficult for Chinese smelters, and coupled with better-than-expected demand from within China for infrastructure and construction projects, the Chinese oversupply case just might be neutered.

Then there's Trump's campaign promise of a $1 trillion infrastructure spending spree. While even some Senate Republicans are balking at the audacity over the size of the proposal, even a more modest-sized program will provide a boost to domestic demand.

Considering the run-up Alcoa's stock has already experienced, no one is saying the aluminum pure play is a screaming buy, but there is enough at play in the global market that can work in Alcoa's favor to allow it to reach even greater heights.

Show me the profits

Neha Chamaria: My colleague Rich has presented a fairly strong argument for Alcoa, especially the China angle that could push aluminum prices higher. However, the concerns and challenges seem to outweigh the opportunities for the company right now.

Investors are primarily betting on Alcoa for two reasons: its spinoff and anticipation of higher infrastructure spending in the U.S. under Donald Trump's upcoming presidency. I'm wary on both counts. First, there's limited visibility about Alcoa as a stand-alone company. Its value-add business, which is now Arconic, traditionally earned higher margins for the company. While high leverage was a burden that Alcoa has gotten rid of having transferred its debt to Arconic, it remains to be seen how quickly and effectively Alcoa's upstream operations can return the company to profitability.

Meanwhile, no one really knows how a Trump presidency will affect Alcoa. Of course, higher infrastructure spending should boost demand, but Trump's protectionist stand might affect trade adversely and spill over to a company like Alcoa, which does all of its bauxite mining outside the U.S. In fact, Alcoa's surprisingly strong recent run-up indicates that much of the optimism might have already been baked into the stock price, especially considering that the company hasn't turned a profit since 2012. Don't forget that aluminum prices were substantially higher between 2012 and 2015, which means it might take a lot for Alcoa to break even.

At the end of the day, Alcoa's earnings remain tied to commodity prices, which can be volatile and unpredictable. Its weak profit record doesn't help its case, either. Bauxite and aluminum prices need to stabilize at higher levels for Alcoa to be profitable, but the industry is still grappling with oversupply concerns. A cleaner balance sheet and aggressive restructuring has undoubtedly set Alcoa on the right track, but unless the company's numbers reflect a turnaround, the stock remains a risky bet -- especially after its recent rally.