Wynn Resorts' great results in 2016 are still not enough to even get halfway to where the stock was in 2014. Still, the stock could be on the way back up.

Macau and its steep gaming revenue drop following increased government scrutiny and regulation is responsible for most of Wynn Resorts' trouble over the last few years. After restrictions on tourism and gambling spending were implemented on the gaming island in early 2014, a place that at one time made up about three quarters of Wynn Resort's total revenue, its gaming revenue started to fall, and it continued to fall for 26 straight months. However, numbers are starting to look encouraging again. November was the fourth month in a row of year-over-year gains in gaming revenue in Macau, and total gaming revenue there is still expected to finish about three times higher in Macau than in Las Vegas for 2016 in total.

Wynn Resorts looks to be preparing for a rebound as well in the next couple of years if Macau's rebound holds true. Wynn's revenue in Macau has already started to rise again in the last few quarters, up more than 11% in the most recent quarter year over year, and it could start to grow even faster in the upcoming Q4, which will be the first full quarter with its new Wynn Palace Cotai open. The new resort is Wynn's first on the newer and more fashionable side of Macau called Cotai (similar to the Las Vegas Strip compared to Downtown Las Vegas).

New developments in the U.S.

While Macau still makes up the bulk of Wynn's sales, the company's new developments in the U.S. could still help sales and earnings to grow in the years to come. Wynn's iconic resort in Las Vegas is preparing to get a major overhaul. Announced in April, the new development at Wynn Las Vegas seeks to replace the current 18-hole golf course with a massive clear-water lagoon including water sports, white-sand beaches, and nightly fireworks from an island in the middle of the lake. The development, called "Paradise Park" for now, will also include another 1,000 room hotel overlooking the water.

Another interesting area in the U.S. to watch is on the East Coast, where developers are seeking to make a new push for growth, regardless of hardship in Atlantic City. MGM Resorts International's (MGM 1.77%) MGM National Harbor outside of Washington, D.C., just opened in mid-December, and Las Vegas Sands' (LVS -1.06%) resort in Pennsylvania has been a highlight of its U.S. operations. Wynn Resorts is currently working on Wynn Boston Harbor just outside of downtown Boston.

The $2 billion resort will sit on 33-acres and will include a casino, hotel, waterfront boardwalk, convention space, and restaurants. Construction only officially started for this new resort in August, so it won't be open for a couple of years, but hype around the resort could help to lift Wynn's stock price even before it opens, especially if MGM National Harbor does well in its first year open.

Wynn Resorts at one time had a dividend yield of over 7%. Through 2014, when the company was making record profit and the growth seemed to be unstoppable, the company's dividend payouts, including generous one-time payouts during especially profitable times, helped to push the stock price higher. When things started to turn sour for Wynn following Macau's regulatory hurdles, the lofty dividend was cut, which aided in the stock losing more than half of its value. 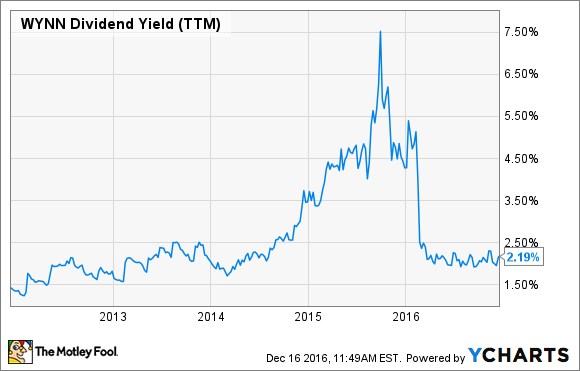 The dividend yield over the trailing 12 months is now about 2%. There's certainly no guarantee Wynn will re-raise its dividend, but as the company has been shown to be generous with dividends in the past, it could certainly raise it once more, which might help to give the stock another boost.

These three reasons for a potential rise in Wynn's stock certainly aren't guaranteed wins. Other than the chance of increased regulation in Macau, such as a recent scare involving potential limits on ATM withdrawals there that sent stocks on a short fall, Wynn also faces intense competition. In Macau, Melco Crown (MLCO -2.68%) opened a new casino resort in Macau called Studio City earlier this year, before Wynn Palace opened, and Las Vegas Sands opened its own Parisian resort, directly across the Cotai strip from Wynn Palace. MGM is building its first Cotai resort directly behind Wynn Palace to open in early 2017. MGM and Las Vegas Sands are also going to work hard not to let Wynn take away market share from their East Coast operations.

As for the chance of an increasing dividend, one reason that might hold back a renewed rise would be that Wynn's debt has continued to climb, which could mean that extra cash is tied up in interest expense before it can be used for dividends. Still, even with these potential roadblocks, Wynn's stock has had great momentum this year, and while it's still far down since 2014, it could have plenty of room to climb back up.

Seth McNew owns shares of Las Vegas Sands. The Motley Fool has no position in any of the stocks mentioned. Try any of our Foolish newsletter services free for 30 days. We Fools may not all hold the same opinions, but we all believe that considering a diverse range of insights makes us better investors. The Motley Fool has a disclosure policy.