While TerraForm Power Inc (NASDAQ:TERP) has been garnering a lot of attention and interest from big investors as of late, younger sister-company TerraForm Global Inc (NASDAQ: GLBL) has been pretty much ignored, causing it to remain potentially more undervalued than its big sister. With the recent price drop back into the $3.60 range, the stock is once again trading substantially below its liquidation value, making it an interesting entry point for risk-tolerant investors. Here's why. 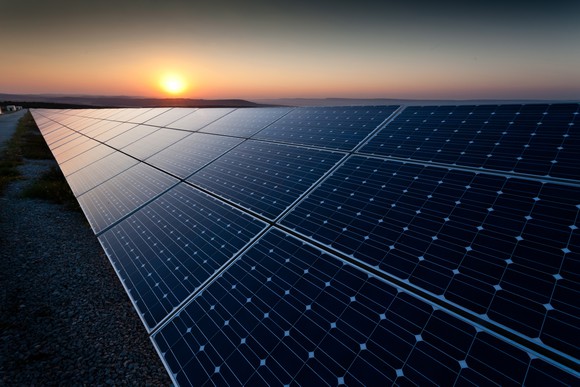 While it's typically best to assess a stock's value on the basis of the company's discounted future cashflow, in many cases, a balance sheet analysis can uncover bargains due to excessive investor pessimism. In the case of TerraForm Global, the stock is currently trading around $3.60 per share, less than 50% of the company's last official book value per share of about $8.00.

There are some good reasons for this large discrepancy. To start, TerraForm Global last filed financials over a year ago. Because of the bankruptcy of parent company SunEdison, the company hasn't been able to submit any 10-Q or 10-K filings since its third quarter 2015 report. A lot has happened since then, and we can't know for certain what the company's current book value is today until it catches up on its filings. Yet an analysis of the company's periodic updates indicates that the value remains much higher than $3.50 per share. To begin, let's review the last official balance sheet.

Over the past year, the only information investors have received about Terraform Global's ongoing operations has come through periodic investor updates. Through these, we've learned that the company has expanded its portfolio of wind and solar plants from 677 MW (megawatts) a year ago to an estimated 947 MW today. Based on the latest filing, we also know that unrestricted cash has dropped to $678 million, and total debt to $1,112 million as of October 31, 2016.

Typically, such a large drop would generate valid concerns about continued future declines, but there are some substantial mitigating reasons behind the large drop in cash. The main one is that last November, SunEdison management forced TerraForm Global to pre-pay $231 million in exchange for 425 MW of Indian solar assets that were supposed to be completed and transferred over in early 2016. Because of the subsequent bankruptcy filing, these assets are probably never going to be transferred, and TerraForm Global is likely out the cash payment.

This is a terrible outcome for Terraform Global shareholders, but the reality is, the loss only reduces book value per share by $1.30, dropping it from $8.03 to $6.73. The additional $74 million reduction in cash is related to the extra money TerraForm Global has had to spend dealing with the repercussions of SunEdison's bankruptcy, and it still only reduces book value per share to about $6.30.

The company is likely worth much more than the $3.60 (as of the time of this writing) that it's currently quoted at.  However, for the time being, it's exchange hands at this valuation because of uncertainty -- something that Wall Street just loves. The largest potential issue is Renova's request for arbitration in Brazil. The company, which sold about 300 MW of projects to TerraForm Global last year in exchange for cash and shares, is seeking damages of at least $250 million because of the drop in TerraForm Global's share value from $15 to $3.60. While arbitration is typically hard to project, it seems unlikely Renova has a strong case, here, given the fact that there is always a risk when taking stock instead of cash.

TerraForm Global has also been named in a number of other suits related to its IPO and subsequent share price decline, as well as a couple of suits related to the firing of former executives. Given the nature of the suits, it's likely they will be dismissed or settled for a fraction of what is being requested by the plaintiffs, but shareholders must live with increased uncertainty while the suits make their way through the legal process.

With all the negative news and lack of financial updates over the past year, it's not surprising that TerraForm Global is trading below its book value. However, the company is now getting closer to correcting a lot of the issues. It recently indicated it expects to be operating independently from SunEdison within the next couple months, and it's projecting to be caught up on its financial filings in mid-March. While uncertainty remains, this Fool believes risk-tolerant investors will be well rewarded for owning the stock over the next couple of years.