2016 was the year when the market decided that industrial stocks were cheap and that buying into them ahead of a bounce in 2017 was a good idea -- an idea that held even as conditions worsened in the industrial economy as the year progressed. But what will 2017 bring? With many stocks now looking fully valued, picking the right ones is more important than ever. Let's look at three stocks that appear set to prosper: United Technologies (NYSE:RTX), Ingersoll-Rand Plc (NYSE:TT), and MSC Industrial Direct Co., Inc. (NYSE:MSM).

The aerospace- and commercial construction-focused giant isn't loved by the investment community, at least if you're using relative value as a guide. As you can see below, United Technologies is cheaply rated compared to its peers. 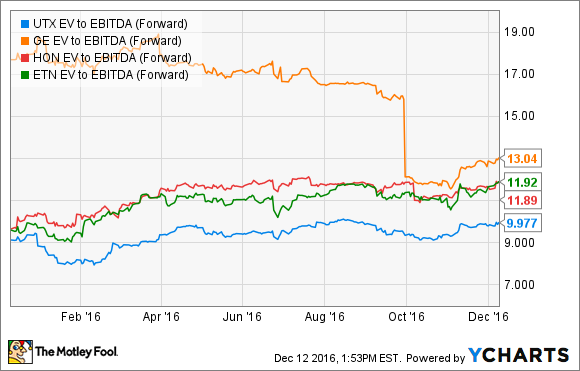 The reason? The company is undergoing a transition phase that involves suffering near-term earnings headwinds in order to lay the groundwork for long-term earnings growth. I discuss the issue in more depth elsewhere, but suffice it to say that three of its four segments are being affected:

These issues will hold back earnings growth for the next few years -- analysts expect just a 5% compound annual growth rate in EPS between 2015 and 2019 -- and it seems the market is unwilling to look beyond the near-term issues.

No matter, such situations often create buying opportunities for the patient, and there is no telling when sentiment will change. Looking ahead, United Technologies needs to go through a trouble-free year of execution -- in particular, to avoid significant production disappointment with Pratt & Whitney's geared turbofan engine. If so, the stock could leave 2017 a lot higher than it entered it. 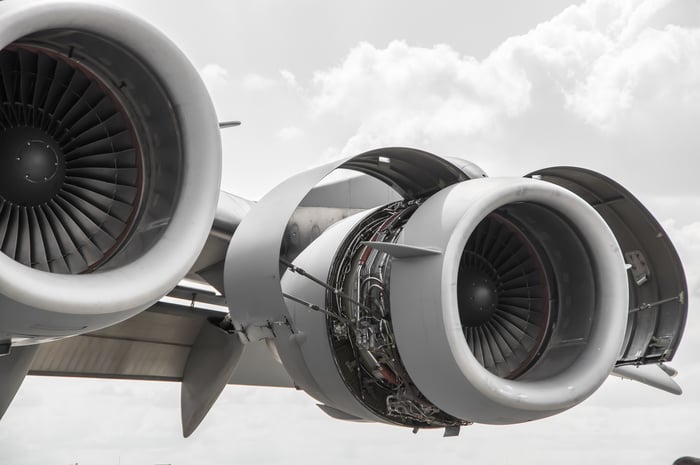 Ingersoll-Rand: Growth at a reasonable price

Now I know what you're thinking: Why buy stock in a company that makes an odd collection of boring things like heating and air-conditioning (Trane and American Standard), transport temperature control (Thermo King), power tools, and golf carts (Club Car)? On top of that, analysts are forecasting only 7% EPS growth in 2017 for Ingersoll-Rand.

But here's the thing: While next year's earnings will be negatively impacted by a cyclical decline in Thermo King, elsewhere Ingersoll-Rand's businesses are quietly improving and analysts see EPS bouncing back to around 11% in 2018.

The climate segment (around 85% of segment operating income) has an opportunity to expand margin toward levels achieved by its peers. Moreover, execution on climate margin this year has been excellent. For example, management started the year expecting climate adjusted operating income margin to be in the range of 13.25% to 13.75%, but come the third quarter, now the forecast is for 14.5%.

While it's true the industrial segment (fluid handling, power tools, golf carts, etc.) has disappointed in 2016 due to weak end markets, sequential margin has been improving and management sees better conditions in 2017.

Everyone knows it's been a difficult year for industrial supply companies like MSC Industrial Direct. Declining industrial production and a deteriorating manufacturing outlook caused MSC Industrial's net sales to decline 1.6% in its fiscal year ending Sept. 3.

While it's been a tough year, the company has been busy continuing to consolidate a largely fragmented industry. Meanwhile, aggressive cost-cutting has kept operating margin stable, and the company looks like it's over the worst.

In addition, MSC continues to grow its large account business as management aims to establish the company's capability to service national accounts. As you can see below, these actions -- made to generate long-term growth -- meant operating margin was declining even before industrial production growth started to slow. 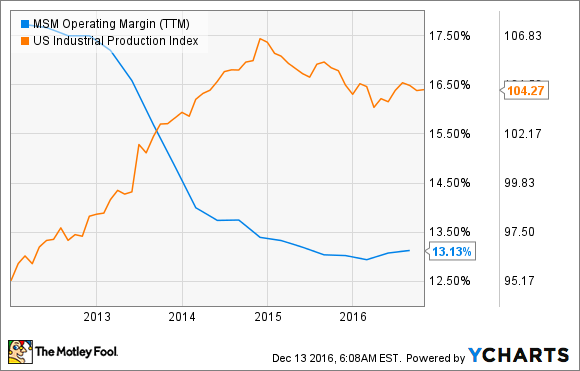 Looking into 2017, if the U.S. manufacturing sector (and in particular heavy industries) recovers, then MSC Industrial is well positioned to grow revenue and margin. As CEO Erik Gershwind put it in the recent earnings release, "As we look to fiscal 2017, MSC is well positioned regardless of what happens in the industrial economy. Should conditions improve or even just stabilize, the Company is poised for a tremendous growth and leverage story."

All three of these industrial stocks offer investors something different. United Technologies will be favored by patient value investors, while Ingersoll-Rand's operational improvements and improving end markets give it growth potential, and MSC Industrial is a good choice for those looking to capture any cyclical upside to U.S. manufacturing.