Please ensure Javascript is enabled for purposes of website accessibility
Log In Help Join The Motley Fool
Free Article Join Over 1 Million Premium Members And Get More In-Depth Stock Guidance and Research
By Matthew DiLallo - Dec 17, 2016 at 9:00AM

Oil prices took a lot of twists and turns over the past year.

Oil prices are notoriously volatile, and their actions in 2016 were no exception. Prices plunged to start the year as supplies piled up in storage due to resilient shale production and rising output from OPEC. Speaking of which, OPEC spent most of the year arguing within itself, instead of working together to fix a problem that had grown worse due to its decision to battle shale producers for market share. That said, as the old oilfield mantra goes, "The cure for low oil prices is low oil prices," which has certainly been the case this year. Here's a look back at the rapidly evolving oil market of 2016.

How low will it go?

Crude oil prices fell into what seemed like a bottomless pit in early 2016, with analysts trying to one-up each other with bold calls on where crude would bottom. Several analysts put out abysmal oil price targets in late 2015 and early 2016 warning that crude could drop to $20 per barrel or even as low as $10 per barrel. Each made a bone-chilling case for why crude could continue crashing with no end in sight.

It turned out that most of these fear-driven calls were wrong, though crude did bottom out in the mid-$20s by early February: 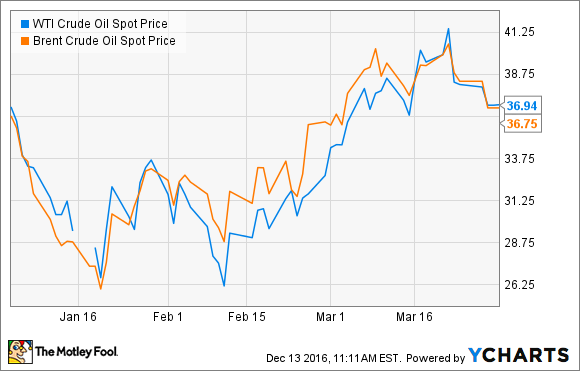 Several factors enabled crude prices to hit bottom. Shale producers not only swore off growth, but several cut investment spending well beyond the level needed to maintain their current production level. For example, leading Bakken Shale producer Whiting Petroleum (WLL) announced an 80% reduction in its capex budget from the prior year. While that capital would enable Whiting Petroleum to complete projects it started in 2015, the company planned to wind down its completion operations by mid-year, which would result in a double-digit production decline by the end of 2016. Meanwhile, several producers in Canada, including Canadian Natural Resources (CNQ 0.81%), shut-in production from heavy oil wells because they were losing money on these barrels after Canadian crude crashed into the teens making it the cheapest crude in the world. Overall, Canadian Natural Resources shut-in 900 barrels of heavy oil per day, as well as significantly reducing its heavy oil drilling program, resulting in a 17% year-over-year decline in its primary heavy crude oil production during the first quarter.

Finally, after a long hibernation, OPEC tried to reemerge as a factor in the oil market by attempting to work together on a coordinated production freeze with non-members, including Russia. That said, the initial talks did not lead to an agreement to freeze output, though they did start heating up oil prices.

Breathing a sigh of relief

All the spending and production cuts from North American oil producers began to have their desired effect on oil prices, which rose sharply off the bottom. That said, crude seemed to hit the ceiling at around $50 per barrel and bounced between that level and $40 per barrel for much of the summer: 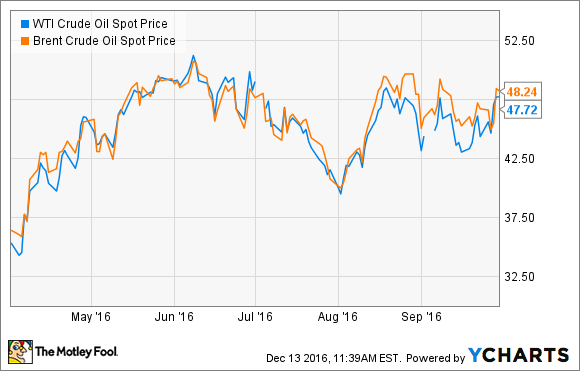 It seemed like any time crude stayed around $40 per barrel for too long that OPEC would pipe up and say it was working on another framework agreement to freeze its output. That would send oil prices back up toward $50 a barrel, which seemed to cool off OPEC's desire to reach an agreement. Meanwhile, with crude prices bouncing off the bottom and holding steady in a new trading range it gave North American oil companies more confidence to increase investments in new wells. Whiting Petroleum, for example, signed several well participation agreements with financial partners, which enabled it to continue completing wells. Canadian Natural Resources, likewise, took advantage of rising prices to restart shut-in production and its stalled heavy oil drilling program.

Another factor steadying oil prices was the growing view that an improvement in oil market fundamentals was just over the horizon. Oilfield service company Core Labs (CLB -0.46%), for example, noted these improving market fundamentals when it reconfirmed its outlook in July for a "V-shaped worldwide commodity recovery beginning in the second half of 2016." Driving that view at the time was the expectation that U.S. oil production would decline by 940,000 barrels per day this year, which represents a 10.1% year-over-year decrease, while worldwide declines would add up to a 3.3% decrease in production. According to Core Labs, these reductions, when combined with a continued increase in global oil demand, "should create a tight crude oil supply market for the second half of 2016, and result in increased crude prices." Core Labs reaffirmed that view in October while noting that U.S. production was declining faster than expected and would be down 11% this year. Core also pointed out that China's year-over-year decline rate reached 10%, pushing production to a six-year low. These factors, along with renewed OPEC talks, reinforced Core Labs' view that oil prices would be on the upswing.

OPEC to the rescue?

That upswing came at the end of November when OPEC members agreed to cut their production by 1.2 million barrels and go back to their former quota system. That announcement shocked the oil market, sending crude spiking nearly 9% that day to more than $50 a barrel. Two weeks later OPEC announced that it persuaded several non-member countries to reduce their output by roughly 560,000 barrels per day in the first half of 2017. This agreement pushed crude prices to nearly $55 per barrel, which was crude's highest level in more than a year.

The aim of these agreements is to drain the market's oil stockpiles, which were nearly filled to the brim earlier this year causing the oil market to panic and analysts to forecast impending doom. That said, the nations pledging to make cuts need to follow through with their agreed output cuts for the agreement to work. Further, shale producers like Whiting Petroleum cannot go back to their free-spending ways and rack up debt to drill more wells. In other words, the jury is still out on whether these agreements will just provide a short-term lift to the market, or send oil prices even higher in 2017.

Matt DiLallo owns shares of Core Laboratories. The Motley Fool owns shares of and recommends Core Laboratories. Try any of our Foolish newsletter services free for 30 days. We Fools may not all hold the same opinions, but we all believe that considering a diverse range of insights makes us better investors. The Motley Fool has a disclosure policy.